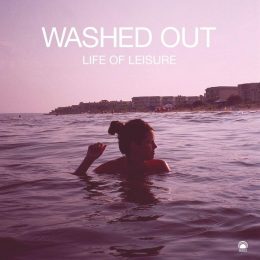 Ernest Greene, the solo multi-instrumentalist behind Washed Out, was born in the state of Georgia. This extended play, Life of Leisure, is a drowsy chillwave mark that has impacted spheres far beyond its initial scope, most notably for the use of its “Feel It All Around” as the main theme for the television show Portlandia [1]. Life of Leisure is, all-around (I’m sorry), a distinct phenomenon of Greene’s upbringing in both the time and place he recorded it in.

Georgia, of course, is home to the massive Atlanta trap-rap scene; a style of hip-hop characterized by its sluggish, broiling 808 basslines [2] and near-unintelligible lyrics, possibly a consequence of obscene codeine consumption [3]. Atlanta hip-hop is also influential in its own right, spawning such exports as Migos, who have cracked the Top 10 more than once, and “inspiring” an endless wave of low-energy SoundCloud rappers in a self-parodic style colloquially referred to as “mumble rap.”

Greene is an easygoing white guy, though. What do the mumblings of thugs and wannabe thugs have to do with him? There is the obvious and easy answer: hip-hop is a significant source of creative inspiration [4] for Greene as a concept, with its rudiments serving as easily remixable building blocks for him to craft tracks out of:

Around the time when I got my first computer, I was really into guys like DJ Shadow — guys who had a hip-hop background, only weirder and more psychedelic. I had the simplest equipment, just my computer and a little keyboard, and that was pretty much it, but I could take sounds from other records and kind of mess with them inside the computer. I manipulated them and built songs from scratch that way, instead of the more traditional way of recording a piano or a guitar.

The caveat, of course, is what sounds Greene picks out, and then what he does with them:

I started making instrumental hip-hop-inspired stuff and quickly kind of ran into the mini-cliches that are involved with making hip-hop beats. There’s not tons of variation within that world. There’s a lot of people sampling the same things. So I tried to start doing things a little different. I was sampling much stranger kind of stuff, outside of that 70s funk thing that most hip-hop producers pull from.

One can quickly discern an important departure from hip-hop in Greene’s works: they are highly melodic, a sharp contrast to the heavily drum and bass-dominated hip hop, where melody often plays second fiddle as a repetitive backing track. Washed Out’s sound is also, well, washed out. Greene throws loads of reverb onto both his instrumentals and his own vocals, simulating the woozy quality of Atlanta’s hip-hop exports through wholly different methods. Greene’s music relies on rhythm less as a direct consequence, oftentimes by making his rhythm tracks themselves melodic; otherwise, his drum tracks tend to be simplistic and are deftly mixed into the song as a whole, avoiding any overwhelming kicks in the monitors.

Both Atlanta hip-hop and Greene’s music dwell upon a certain kind of urban ennui, but through two completely different lenses. The music of Atlanta rappers is about hustling, or at least the ideal of hustling [6], without a real end game in sight. The music of Washed Out — note that this EP was released in the immediate aftermath of the 2008 financial crisis — is about not being able to do anything, stuck halfway between comfortable slackerdom and anxiety about the future. The chillwave genre is all about sitting on your bed, staring at the ceiling, with all the myriad and often contradictory ambivalence about your situation that comes along with it.

It is enough to compare these two different musical styles to paint a compelling picture of what life in the modern sprawl-scape looks like to two very different groups of people. More curious, however, is how one of these styles gives explicit credit to the other, and not the other way around. Is it accurate to suggest that hip-hop emerged spontaneously, and that Greene is just being thorough in handing out his dues? Certainly not [7]. Atlanta trap owes just as much, if not more, to its (inevitably white) predecessors as Greene’s waves owe to the sound of Atlanta in general.

Greene is by no means some kind of Faustian European purist. But it is telling that his interactions with the Atlanta trap sound led to something entirely different in his hands, where the same influences in the hands of blacks would likely yield yet another typical Atlanta trap record, complete with the previously-mentioned cliches that Greene noticed and shunned. It is also important that Greene’s early experimentation with more straightforward beatmaking didn’t land him some kind of producer gig, as is often the case; black rappers wouldn’t have much on deck if there weren’t musically adept white kids capable of churning out instrumentals according to a formula they’ve cracked. (For a useful natural experiment in this regard, compare Sacramento producer duo Hippie Sabotage’s rapper-forward output [8] with their more experimental solo efforts [9].)

All told, it is just a matter of who has the social decency to say “thank you.” Telling, isn’t it?

Regarding the extended play itself, Life of Leisure is a very comfortable escape, albeit one that may stir up some restlessness in your heart. Greene is adept at walking a tightrope between precise and invigorating sonic innovation in his instrumentals and woozy, deliberately ambiguous vocal work clearly inspired by shoegaze. The sharper tracks on the album, like opener “Get Up,” “New Theory,” and “You’ll See It” immediately call 80s synth-pop to mind, carrying upbeat energy that counter-balances some of the more tempered melancholy that the rest of the EP has to offer. The famous “Feel It All Around” and “Hold Out” use a similar palette of sounds, but on a canvas with more room for contemplation — soundtracks to an existential disco, almost as if you’re hearing the music from a distant coatroom.

Life of Leisure can only be accused of falling somewhat short in one category, which is thankfully blunted by Greene’s wise use of shorter track times. Having developed his musical chops through hip-hop, Greene can sometimes stray a bit too close to the repetitive. Such a thing is easier to stomach when the sounds that linger are as beautiful as the ones contained on this EP, though, and any track that overstays its welcome does so only for a few minutes.

Taken altogether, Life of Leisure is a piece of music with remarkable staying power; despite being the godfather of a rather dated subgenre, Leisure holds replay value to this very day. Life of Leisure is highly recommended for mildly hipster-minded readers on a day you need some creative energies moving through the house. You might catch yourself pondering how the same city’s imprint can lead to such different outcomes among different people.