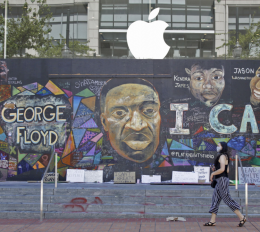 “I am not sad that a fucking fascist died tonight,” one black protestor proclaimed [1] through a megaphone in Portland. She was reacting to the murder of an unarmed Trump supporter, killed by Michael Forest Reinoehl, a man with a black power fist tattooed on his neck who described himself as “100 percent Antifa.” Antifa and Black Lives Matter celebrated the assassination. “He was a fucking Nazi,” a protestor bellowed to the crowd, “Our community held its own and took out the trash.”

The Left had been the cheerleaders for Black Lives Matter regardless of the consequences. When the consequence was death, openly defending the disorder, or pretending that it wasn’t happening, became untenable. A day later, #TrumpRiots [2] went viral on Twitter: Democrats had pivoted to blaming Trump and his supporters for the chaos.

In the early days of the rioting immediately after George Floyd’s death, a political data analyst called David Shor sent a Tweet [3] arguing that riots had helped Richard Nixon get elected in 1968. It was a message that, at the time, few on the Left wanted to hear. The liberal clients of his employer complained, and Shor lost his job as a result. Vox, a Left-wing website, makes clear that the pro-rioting viewpoint [4] was widespread among Democrat Party insiders: “Many Democratic Party professionals believe the backlash to his Tweets was deserved. Indeed, though Shor has found a new job in progressive politics, one of the conditions of his employment is that he can’t reveal who’s hired him — lest his new employers face the same criticism.”

But now Shor’s argument is too hard to ignore. If rioting could happen in Kenosha, it could happen anywhere — and voters started to worry the chaos might end up on their own front door. With poll numbers shifting, it became clear that the riots are indeed bad for the Democrat’s chances in November. And so, with complete cynicism and insincerity, Kamala Harris and Joe Biden didn’t just condemn the violence, they blamed it on Trump. Biden claimed [5] Trump was “absolutely” rooting for violence. In a televised campaign ad, melancholic music plays as images of burnt out buildings are intercut with a Biden speech. Biden does his best to fill the words with gravitas: “Fires are burning,” he intones, “and we have a President who fans the flames.” Biden claims that Trump has failed “to call on his own supporters to stop acting as an armed militia.”

This all flies in the face of the fact that many on the Left have openly supported rioting and looting for the last three months. They are counting on the public having a memory shorter than Joe Biden’s, so here, then, is a recent history lesson. Jacobin magazine published an article entitled “When Rioting Works [6]” which argued that rioting “is a rational response to grinding poverty and oppression” while The Nation featured a piece headlined “In Defense of Destroying Property [7].” Both those publications are on the hard-Left, but liberal and center-Left outlets were just as unashamedly pro-riot. From the safety of a luxury office in a nice part of town, The New Yorker posted the following quote to Instagram: “The Target is on fire. Frankly, I couldn’t care less.” 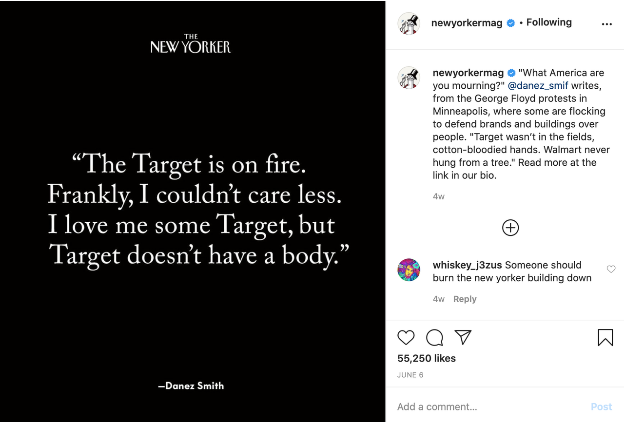 It’s a cruel statement showing a reckless disregard for the firefighters who risk their lives in the line of duty. It also shows a total lack of concern for the workers who lost their jobs in the middle of a recession because the business they worked for burnt to the ground. At that magazine, even physical assault was par for the course [8]:

We heard, ad nauseam, that “a riot is the language of the unheard.” After a night of looting, CNN’s Chris Cuomo asked rhetorically [9]: “Show me where it says protesters are supposed to be polite and peaceful.” The Daily Beast [10] referred to criticism of the rioting as “the absolute worst response to the George Floyd protests.” Nikole Hannah-Jones, The New York Times Magazine reporter responsible for the 1619 Project, was honored at the suggestion the riots should be named after her fake history. 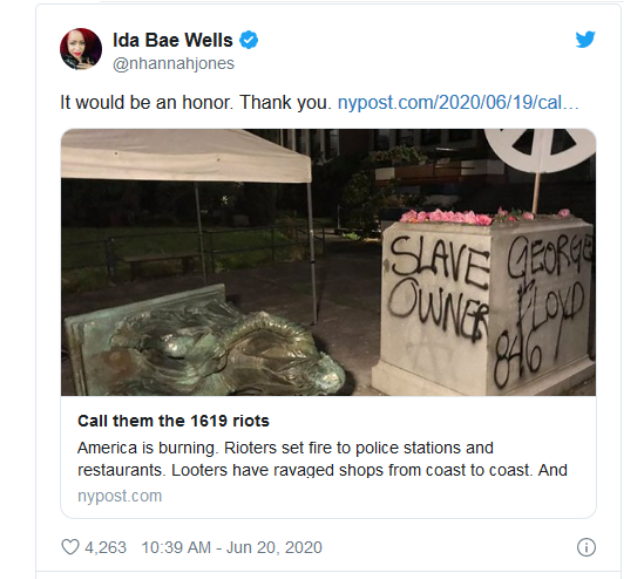 March for Our Lives co-founder Emma González suggested that unless you’re willing to support the riots [11], then you’re not really on the side of the protesters, sarcastically tweeting: “I can excuse systematic murder but I draw the line at property damage.” Jewish transexual Vicky Osterweil wrote an entire book In Defense of Looting: A Riotous History of Uncivil Action which received positive press in The Huffington Post and NPR. When a blue tick account on Twitter said black people have “every right to burn down a country they built for free” it garnered over 700,000 likes.

Far from pushing back against any of this, Democrat politicians enthusiastically went along with it. On June 1st, Kamala asked her followers [12] to “chip in now to the Minnesota Freedom Fund to help post bail for those protesting on the ground in Minnesota.” Likewise, Reuters reported that at least thirteen members of Biden’s campaign staff had posted on Twitter to claim they had made donations to the fund. Biden chastises Trump for “pouring gasoline on the racial flames that are burning” while in the same breath declaring that people “have a right to be angry.” His running mate claims that “the life of a black person in America has never been treated as fully human.” You can’t calm this fire by echoing Black Lives Matter’s rhetoric of America as a systemically racist and evil society. Kamala Harris ominously made clear she wanted the chaos to continue for the foreseeable future:

When statues were being toppled throughout the country, Nancy Pelosi said [13] “if the community doesn’t want the statue, the statue shouldn’t be there.” Asked whether that should be done by a city council rather than an angry mob, Pelosi responded “people will do what they do.” It was this indifference to lawlessness that led the country to where it is now. When Trump tried to quell the rioting, Pelosi branded [14] Federal agents “stormtroopers” and “Trump’s secret police.”

Dem leaders and their allies in the media cheered on the violent left every step of the way…pic.twitter.com/goInUrw6P8 [15]

Congresswoman Ayanna Pressley called for [17] “unrest in the streets for as long as there is unrest in our lives.” Pressley has a history of supporting violence. In 2019, she backed Antifa militants accused of assaulting police officers, claiming “I don’t think they should have been arrested, and that’s why I’ve been promoting a bail fund to support them. . . They were protesting a racist, fascist, demonstration.” Fellow squad member Ilhan Omar also came out in support of the chaos [18]: “We are in the midst of an ongoing uprising over centuries of racial neglect and oppression.”

The Washington Post conveniently claimed the election “will likely spark violence” and end “catastrophically” in every scenario “except a Biden landslide.” Was this just a neutral forecast? It sounded more like a threat. The people who had been cheerleaders for the uprising were now using the threat of violence to win an election. Biden himself asked [19]in a speech and again on Twitter: “Does anyone believe there will be less violence in America if Donald Trump is reelected?” If you dare reelect Trump prepare for more violence. Give us what we want or we’ll burn the country down. Thinly-veiled threats of violence have become semi-normal for the Left. Governor Andrew Cuomo told Donald Trump [20] he “better have an army to protect him if he comes to NYC” as he “can’t have enough bodyguards to walk through New York City.”