The Youthful Spirit of Revolution 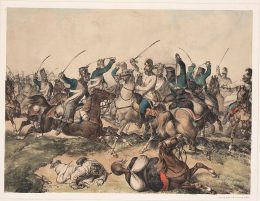 W. Trentsensky, Cavalry skirmish during the Battle of Komárom, 1849.

When I was living in Hungary, I took my girlfriend on a day trip to the border town of Komárno, Slovakia. Despite having a nice meal and a scenic walk around the town, I ended up complaining and arguing about trivial matters. Near the end of the day, we saw a memorial to Mór Jókai, the famous Hungarian writer who played an important role in the Hungarian Revolution of 1848. For some reason, the memorial of Jókai made me realize that I was wasting my time complaining instead of enjoying my time in a foreign city. Since this experience, I always try to remind my friends in the Dissident Right to make the most of each day and to enjoy the little things in life as much as possible.

The Gesta Hungarorum by Simon of Kéza describes how the Magyar tribal chiefs Ketel and Alaptolma established a settlement called Komárom along the Danube in the 10th century. A fortress near the settlement was built sometime in the 12th century. By 1265, King Béla IV of Hungary granted Komárom the status and privileges of a commercial town. These privileges allowed Komárom to grow and prosper as a center of trade. Matthias Corvinus used the location as a main base during his battles against the Ottoman Empire in the late 15th century.

By the 16th century, Komárom was one of the main centers of defense against Ottoman expansion into Europe. The fortress was expanded and successfully resisted the attacks of the Ottoman forces during the Great Turkish Wars (1683-1699). After the expulsion of the Turks from the region, Komárom continued to be an important center for trade throughout the 18th and 19th centuries. The city incorporated Baroque architecture and many noble families from the neighboring territories relocated there.

Mór Jókai was born in 1825 to one of these noble families in Komárom. After his father’s death at the age of 12, Jókai was sent abroad to continue his education. During college, Jókai met Sándor Petőfi, a fellow student who shared Jókai’s interests in literature and poetry. In 1845, Jókai was invited to Pest (modern-day Budapest) after Petőfi found success there with his epic poem János Vitéz. Petőfi introduced Jókai to his social circle of Hungarian writers and artists. That same year, Jókai had his first stories featured in a Hungarian literary journal. In 1846, these stories were compiled into a collection called Hétköznapok (Working Days).

Jókai and his friends started holding meetings with activists at the Pilvax Coffee Palace where they would discuss the political changes that were occurring throughout Europe. On March 15th, 1848, Jókai and his friends marched around Pest reading Petőfi’s poem Nemzeti Dal (National Song). The group also declared a 12-point list of demands against the Austrian Empire. The crowd gained thousands of supporters and the popularity of the event forced the governor of the area to accept their demands. These events would eventually lead to the Hungarian Revolution of 1848.

The Hungarian Revolution was one of the many conflicts that occurred after Franz Joseph I of Austria came to power. Lajos Kossuth became the Governor-President of Hungary and declared total independence from the Austrian Empire. Jókai supported the revolution and Petőfi joined the Hungarian Revolutionary Army. During the next 18 months, there were various battles throughout Hungary. Three important battles during the revolution took place in and around Komárom.

The battles that occurred around Komárom are reflective of the entire revolution. After a series of Austrian defeats, Franz Joseph asked Russia for help and received over 200,000 Russian soldiers. The Austrian and Russian forces defeated the Hungarian forces at Komárom, Segesvár, and Temesvár (Timișoara, Romania). On August 13th, 1849, General Görgei signed a declaration of surrender to the Russian army at Világos (Șiria, Romania). Jókai was present at this historic event, but Petőfi was not. Petőfi was last seen at the Battle of Segesvár and is believed to have been killed in battle. It is said that before the battle started, Petőfi recited one of his poems called Jövendölés (prophecy), which describes a young man dying after accomplishing his greatest goals and achievements.

After the revolution, Jókai lived the life of a dissident and kept a low profile. Nevertheless, he was extremely productive during this time. Over the next 18 years, Jókai would write 30 novels and a large collection of short stories and essays. After getting involved in politics after the Austro-Hungarian Compromise of 1867, Jókai went back to writing around 1870. It was during this period that Jókai would write Az Arany Ember, known around the world as The Man with the Golden Touch. The novel tells the story of Timár, a man who succeeds at everything he does, despite facing numerous hardships and challenges. Yet even with his success, Timár must choose between a life of wealth and a life of happiness. Az Arany Ember became one of Jókai’s most popular novels and also takes place in his hometown of Komárom.

When I first met my Hungarian girlfriend, I told her that I had been to every Eastern European country except Slovakia. After a few weeks of planning, we decided to take a day trip to Komárom, Hungary and walk across the bridge to Komárno, Slovakia. After spending the day on the Slovakian side of the town, we were going to take a train to Sopron to attend a heavy metal concert later that night. When we arrived in Komárom, we found out that the train schedule had changed and that we could not take an express train to Sopron. Therefore, we would miss the concert and I would not be able to see Pokolgép, one of the first metal bands from Hungary.

On the Slovakian side, we had a hard time finding a restaurant that served traditional Slovak cuisine. After haggling with a rude waitress at a Hungarian restaurant, I ended up having bryndzové halušky (potato dumplings with cheese and bacon), kapustnica (a soup with sauerkraut and sausage), and a few shots of pálinka (Hungarian liquor). We then walked to the fortress but were not let inside due to renovations. After walking around the outer area of the fortress, we decided to have some ice cream in the famous city center courtyard. While we were admiring the baroque architecture, my girlfriend spilled her ice cream on my clothes. As I was wiping off the ice cream with my napkin, I started complaining about all the things that had gone wrong that day. I complained about missing the concert. I complained about the rude waitress. I complained about not being able to go inside the fortress compound. I even complained about the spilled ice cream. We then got into an argument and decided to walk back to the train station and go home.

Before we left the courtyard, I noticed a statue and memorial dedicated to Jókai. I stopped to look at the statue. I asked my girlfriend if she knew anything about Jókai. She explained that she had read Az Arany Ember in school and that it was one of her favorite books. I told her that I had heard of the book but never got the chance to read it. We sat back down on the bench and she summarized the plot and told me about her favorite characters. After some time had passed, I admitted to her that I felt foolish for letting a few inconveniences ruin my day. I also regretted the fact that I spent more time complaining than enjoying myself in a foreign city with a girlfriend.

With all the violence, demographic issues, and anti-white propaganda that we face, it is only natural for people in the Dissident Right to sometimes feel frustrated, depressed, and hopeless. In many ways, our circumstances are far worse than any dystopian science-fiction movie or TV series. Yet we must also remind ourselves that there is value in positive thinking and positive attitudes. Always appreciate the things you have in life. Always take the time to enjoy the simple things, whether it be a walk with your dog or a conversation with a friend. As the saying goes, “you don’t know what you have until its gone.”

This is not to say we should forget or ignore the problems we face. Sometimes we just need a break from the doom and gloom to focus on the things that give our lives meaning, purpose, and happiness. It is important to read a book. It is important to learn a language or develop a new skill. It is worth taking a day trip to a foreign city. Never let the challenges we face as white people stop you from living and enjoying your life. By taking the time each day to enjoy life, I am reminded why we must secure the existence of our people and a future for white children. So they can enjoy the history, literature, and culture of their ancestors. So they can appreciate the nature, memorials, and architecture of their homelands. So they can be proud to be white.

Things did not work out between me and the Hungarian woman. Nevertheless, I appreciate all the experiences I got to share with her. For Christmas, she got me a dual-language book that contains stories and poems from famous Hungarian writers like Petőfi and Jókai. Therefore, I practice my Hungarian each day so I can read their writings and remember all the sacrifices they made for their people and their homeland. As a wanderer, dissident, and white nationalist, it is my honor to keep their language, memory, and youthful spirit of revolution alive.