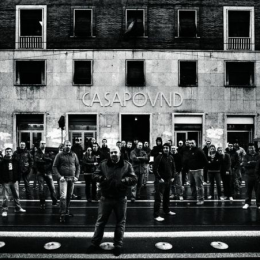 Of course, we know that the idea of a people is under attack in the West: the Left, the progressives, and the liberals (please don’t call them “cultural Marxists,” they are not “cultural” nor “Marxists”) are working to destroy the idea of “heartland,” common values, ethnic homogeneity, et cetera.

We can say the same about the concept of territory. The sanctity of national borders is routinely violated by internet superpowers, NGO boats making landfall, and corporations that choose where to produce, where to sell, where to abuse state subsidies, and where to pay — and not pay — taxes.

But the most important point is sovereignty, which stands for a state being able to make its own choices.

Supranational powers are trying to kill the idea of a nation-state by killing the sovereignty inherent to it; a typical example is how Facebook can modify the normal political process of a country. Take the Italian case, where the company deleted the page of the radical Right political party and movement CasaPound Italia (CPI) and the pages of all of its activists, going so far as to ban even the symbols and logos of CPI as “hate propaganda.” This was done despite the party being legally admitted to the national and local elections in the country. As a result, Facebook is actively interfering in national and local elections in Italy, as CPI candidates can no longer rely on Facebook as a tool of political campaigning. [1] [1]

Likewise, Twitter has decided to completely remove certain keywords from the totality of political discussion, branding them as “hate speech” — which is quite laughable. Google is actually in a position to accept or reject whole ideas or questions in society. But this danger is not limited to elections or small fringe parties and movements: this is happening every day.

For example, we know that Google or Facebook knows more about the Irish public through data mining than the Irish government knows or even can know. But if this information superiority is already a reality, as I underline today, this means that in the near future we’ll see the end of the most intrinsic quality of the state: the monopoly on violence.

How is this happening? Currently in two ways, which will probably intensify.

First of all, private military companies (contractors) are technically able to challenge the military forces of many states. They are recruiting members with elite backgrounds (previously trained for years by the armed forces of one state or another) and they have the capacity to conduct “regime change operations.” Of course, at this moment in time, they do not operate in the same manner or areas as standing armies of first-world nations, but there is reason to believe it is simply a matter of time before they begin acting with more agency.

After all, as we saw in many second and third world nations where contractors organized riots, they used the reaction of the “rogue state” to create and weaponize a narrative (by exploiting media and marketing experts) and applied “direct military force” to “defend people” and overthrow an “illegitimate government.” This could happen tomorrow in France during the yellow vests protests, or in the US by maneuvering the Antifa/BLM/Never Trump movement.

The second field to keep under a watchful eye is what is called “the public order.” Taken for granted until yesterday, peace could very well be considered an asset you’ll have to pay for if you don’t want riots and chaos to take place in your neighborhood. If, for example, BLM’s calls to defund the police remain a powerful argument in the future (and we are sure that it will be), you’ll still need someone to patrol the road in the absence of a public police force. That’s where private police come in.

This seems to betray the motivations of corporations like Amazon or Netflix; why are they such good friends of the BLM movement? Because they are looking forward to the big business of security. Really, they can’t wait for it. Naturally, this means that in the future the laws of a given state will be less and less sovereign — and way less effective — than Amazon’s or Google’s laws.

There are several points of view and many examples of identitarian movements that have tried to confront this new post-political future on their own terms. If the erosion of the traditional political landscape is taken to be a given, then the most important question to reflect on is how we can divert this process in our favor.

Take Italy, for example. Movements like CasaPound are opting out of the electoral struggle and the use of their own symbols for external “marketing” purposes, urging their militants to pursue politics within mainstream right-leaning parties, particularly at the local level or in the youth association of parties like “Lega” or “Fratelli d’Italia.” It’s basically using an old Italian Leftist tactic known as la doppia tessera — “double enrollment” or “dual membership,” as in holding two membership cards. [2] [3]

For a long time now, Greek activists in Golden Dawn have attempted to replace the official police in destitute neighborhoods with their own patrols. This is done both to gain popularity in these parts of towns — often traditional strongholds of the Left — and to defend the locals from the Islamization of the suburbs.

During the American BLM/Antifa riots, we witnessed the frequent absence of police when and where it mattered most. The message seems to be that if you are able to organize patriots for local patrols and defense of your neighborhood, you can minimize the chaos. If not, you may very well up end up seeing your business, your vehicle, or your own home burning.

The State can’t — or won’t — help you. We have to accept this — and choose to organize ourselves for the future instead.

If you want to support Counter-Currents, please send us a donation by going to our Entropy page [4] and selecting “send paid chat.” Entropy allows you to donate any amount from $3 and up. All comments will be read and discussed in the next episode of Counter-Currents Radio, which airs every Friday.

[1] [6] Facebook tried to interfere with both the official political process and the informational process — in other words, informing the public of your campaign. You will find some false information about the party as grounds for it being deplatformed, though it must be noted that Facebook lost the legal trial defending this decision because an Italian judge ruled that a private company has no legal grounds to decide if a registered political party is legitimate or not. In any case, despite the official page of CPI being back online as Facebook has been forced to reinstate it, Facebook upheld the bans and deletions of accounts belonging to individual militants who, of course, are in no position to contest these actions in court. Facebook also unsuccessfully tried to shut down the accounts of newspaper and publishing houses linked to the movement.