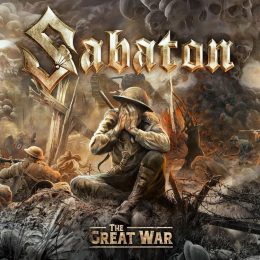 Sabaton is a Swedish metal band hailing from Falun. Their musical style, in the loose sense of the word, is mostly unremarkable power metal combined with a typically European harte vocal inflection courtesy of the group’s part-Czech lead singer, Joakim Brodén. Sabaton’s shtick, for lack of a more fitting term, is their use of “history” in informing their tracks’ lyrics and messaging. This record, The Great War, deals entirely with the First World War.

Such a concept seems interesting on the surface of it, but the problem with Sabaton lies in their decidedly modern, sanitized image of what “history” is like to those who profess an interest in it. Much like the scourge of Facebook pages titled some variation of “I love science,” the music of Sabaton is for people who “love history,” but can’t seem to make up their minds about what any of it means.

For one, there is the band’s immediately cringe-inducing, schoolteacher-like earnestness involved in penning these tracks, as they consist mostly of metal instrumentals that could have been ripped from a royalty-free background music catalog and a shouted recitation of Wikipedia-tier details about gruesome battles. A prime offender in this regard would be the single “Attack of the Dead Men,” whose synthesizer flourishes sound like Rammstein following a bath in egg batter. “Dead Men” details the charge of Russian troops suffering from a German poison gas attack at Osowiec, with all its gory details reduced to a strange sort of allegory for what “patriotism” is, all the prerequisite solemnity of an epic aside. The closest one gets to meaning in “Dead Men” might be one line about two national leaders — “Hindenburg and the Tsar” — characteristically deprived of context.

Someone introduced to these events through Sabaton’s music, or, heaven forbid, someone with a modicum of knowledge shallow enough to be enthralled by their storytelling, is left with nothing but a factoid about a conflict that they imagine is far enough off in the past to be pop culture kibble. I imagine the men of Osowiec are rolling in their graves, if they ever got one.

Sabaton represents a sort of apex modern metal band, as their music is designed rather explicitly not to offend or grate too harshly on the ears. Medals of honor from the Great War — and one wonders why they chose this specific conflict — are handed out without discrimination to Russians, Germans, Canadian Indians, and Lawrence of Arabia, all with the rather unsubtle wink-and-nod that the band is valorizing bravery, and certainly not espousing the interests of the relevant nations that sent these soldiers into the rings of hell.

Metal, of course, used to be a polarizing genre that inspired various amounts of pearl-clutching or great enthusiasm. Its popularity has, however, led to a great many shameful moments in its history that sully the reputation of its good — from sludge, to black, to death — by its association with the bad — hair, thrash, and whatever the hell Sabaton is. This is the sort of band that you could sate the shrieks of your overbearing parents with, since it is actually about history, and you’re being a good boy of some kind. There is no church-burning, drug-taking, or really any material that demands some level of spiritedness from the listener to be found in this band’s discography. It doesn’t even make any sort of intellectual demands, either, since the subject matter of Sabaton tracks don’t slot into any world narratives at all.

The band has succeeded in making themes of bloodshed into half-baked slam tracks that neckbeards can shout in their car.

The Great War is a record that is chock-full of what can only be called trivia. They have some level of appeal towards the young man who has taken a keen interest in things like tanks, since they can feed him intriguing stories about zombie bloodbaths and the Red Baron. But do these songs edify in a real sense? For one, there is the fact that a young man does not need to justify a keen interest in things like tanks to the rest of the world — pathologizing an interest in violence is a weapon of the elite. And he especially does not need to explain away this fascination by wallowing in IKEA-tier metal, defanged of anything profound or thought-provoking; instead, these stories paint heroism and tragedy in Western history like tales in comic books, commercializing a conflict and dispossessing Europeans of it at the same time.

Let’s consider the rather absurd hyperbole in the chorus of “Devil Dogs”:

Kill, fight, die
That’s what a soldier should do
Top of their game, earning their name
They were the Devil Dogs
In a war machine
They were the USA Marines

For what is not exactly mentioned. In fact, the American entry into the First World War is not even discussed in this track or for the entire album except in passing, leaving the “for what” question even more vague. One might argue that a mythologization of death and war is a feature of a society valuing the warrior ethos, but this bit of posing does not even begin to approach this ideal. The deeds and characterizations to be had both in The Great War and indeed, in almost all literature penned about war in the modern age, are wholly separate from the listener’s identity and being, viewed through the cynical and disattached lens of consumerism and historical intrigue.

One does not feel a closeness with teeth-gnashing ancestors or poison-gassed great-grandparents by consigning their stories to a distant and abstract “past,” where suffering and world-historical forces are no longer inspiration for drama, for allegory, or for reflection. Popular music, the cruel mistress that it is, insists they become headphone material for those who wish to be edgy with full benefits. The Great War concludes with a ghastly rendition of John McCrae’s “In Flanders Fields.” I suppose it is fitting, considering the band committed a massacre against the memory of the men involved in their subject matter.

Our own folklore does a much better job of making the past real to us. We don’t need people who make literal video game music to tell us about our ancestors.

« Along the Castle Walls