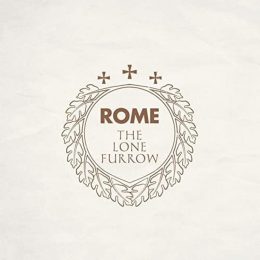 Rome is the project of Luxembourgish multi-instrumentalist Jerome Reuter. Genre-wise, one could call Rome “neofolk,” if one assumes that “neofolk” as a genre simply describes reedy guitars and deliberately vague attempts at mysticism. That describes the music of Rome to a T, a project that attempts to synthesize the often-complicated and esoteric music of the neofolk genre with Reuter’s brand of inane nihilism.

Rome follows the tradition of peeping-tom style grifters making tunes that include all manner of provocative, “fashy” music for ashamed listeners to indulge in with plausible deniability. Reuter goes out of his way to state that his band is not political [1], and dodges almost all questions about his work with a mock-humble, pretentious air that smacks more of disingenuousness than mystique. Of course, the subject matter that he chooses to tackle seems, on the surface, to be of interest to the Right, but handled with a looming disclaimer over the top that he isn’t glorifying any of these things, just “exploring” them with a useless, relativist dialectic.

His inspiration for creating music like this has no solid foundation. Sure, it’s about “change,” and “fear,” a cope obviously cribbed from a liberal interpretation of the Spenglerian ethos that guided his more honest predecessors. Reuter is a shameless man. Why? He claims that there are no answers [2] to the problems of the modern age:

You just see the changes in the cities and on the major crossroads within Europe. Things are changing. Things are in uproar, and I witness this all around. I have the privilege of having friends in many different countries and I roam about quite a bit and so I got a real sense of how people are worried and frightened. Frightened of the right, frightened of the left, frightened of this new age that has swallowed us up. And no one has the answers.

I’d be more willing to excuse that line of reasoning if Reuter was making any other music than this, with any other lyrics than this, with any other aesthetic than this. His claim that there exist no “answers” to the woes of the current year is the mark of a man who either does not understand by ineptitude or refuses to understand by deceit the subject matter that he pilfers for his pet projects. What man gets to the bottom of a glass of anti-modernism and decides that the path forward is unclear? The simple answer is that no one does, unless they’re a patent fool; and knowing Reuter and his talents, this exemption most certainly does not apply to him.

Previous Rome albums include works like Passage to Rhodesia, in which the Rhodie conflict is reduced to nothing more than a tepid musing on whatever brotherhood is, and Le Ceneri de Heliodoro, which curiously incorporated a sample from Enoch Powell’s famous “Rivers of Blood.” When asked about things like this, Reuter is keen to dismiss any real consequences or meaning. “Will there be rivers of blood?” he asks himself; “maybe,” and “I hope not,” he replies.

This record, The Lone Furrow, incorporates just about every trope imaginable on a late-era neofolk record. There are complex instrumentals that veer dangerously close to bardcore, obligatory choral sections and interludes, nods to the industrial period, and a heaping dose of non-committal and hamfisted references to the aesthetics and themes of the Right. These run the gamut from obvious and painful, like the track “Kali Yuga über alles,” plenty of oblique critiques about the modern world defanged of suggested alternatives, and a musical palette that could have been ripped from any ambitious period drama soundtrack under the sun. There are lines about carrying torches. How quaint!

Furrow is enjoying some small acclaim [3] from the toothless, including nonprofits supported by the Luxembourgish government itself, as a “demolition of the despiritualized modern age.” But what could be more modern than a project like this? Sure, Reuter and his guests are bitching about unnamed modern malaise — but it’s an incredibly decadent sort of bitching, one that uses such a rich philosophical language and musical tradition to reach no conclusions, make no bold statements, and go nowhere other than where Reuter started: as a man comfortable with his position of being slightly edgy in the mainstream. Rome is to neofolk what Behemoth is to black metal; a PG-13 facsimile of excitingly dangerous material made appropriate for the modern age by kissing men on stage. Nergal, of Behemoth, appears on this album, by the way.

Consider this litmus test: who would be made uncomfortable by this album? Really, nobody; there is nothing on this record that would offend the sensibilities of some rune-”reclaiming” Leftist, of a Rightist, of an apolitical neofolk fan. Therein lies the naked truth of Rome’s music, as none of Reuter’s lyrics cross a line that would prevent open-ended interpretations. This is marching music for everyone, whether European liberals who engage in Lisa Simpson-esque crusades (“We can do that, too!”) or Americans who are content to hear something that sounds medieval after soaking in a vat of radio brain poison their entire life. If this is everyone’s music, then it is also nobody’s music. I, for one, prefer my revolutionary tunes free of European Union endorsements.

It’s a shame that Reuter does this, as he’s obviously an incredibly talented musician. The instrumental work on Furrow approaches some incredible sonic peaks, and it is clear that Reuter has matured substantially in his composition style since his last release. But all of this is a backdrop to him clawing at a sum of nothing, playing with the fire of anti-modernism without ever straying too close to the bathroom curtains. Something about these aesthetics draw him in, get him curious; but you’re not allowed to incorporate any of these themes into your work without appropriate detachment.

Look, I get it. The Right is sexy. But we’re a culture, not your costume.

Author’s note: I would like to thank Fróði Midjord for his input into writing this review. Find him here [4] and here [5].