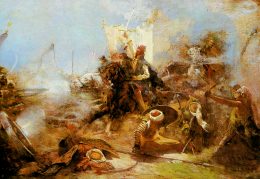 Hollósy Simon, Zrínyi’s Charge on the Turks from the Fortress of Szigetvár, 1896.

Nikola Šubić Zrinski is an opera written in 1876 by Croatian composer Ivan Zajc that retells the Siege of Szigetvár. It is Zajc’s most accomplished work and is considered the national opera of Croatia. An excellent recording of the opera was released in late July featuring the Rijeka Symphony Orchestra and Rijeka Opera Choir conducted by Ville Matvejeff and baritone Robert Kolar as the titular character.

Zajc was a major figure in Croatian music. In addition to being a prolific composer, he was also a conductor and educator. Indeed, the period in which he was active in Zagreb is known as the “Zajc period” in Croatian music history. The Croatian National Theatre in Rijeka was renamed in his honor in 1953.

Zajc was born in Rijeka in 1832 to a Czech father and a German mother. He studied composition and conducting at the Milan Conservatory from 1850 to 1855. Upon his graduation, he was given an offer to work as a conductor at La Scala, but he returned to Rijeka due to the deaths of his parents. He later moved to Vienna, where he composed a total of 24 operettas. In 1870, he returned to Croatia to conduct the opera at the Croatian National Theatre in Zagreb. He also became the director of the Croatian Institute of Music (now the Zagreb Academy of Music), where he taught voice and piano and conducted the school orchestra. It is likely that his decision to move to Zagreb and abandon his career in Vienna was influenced by the Croatian nationalist movement.

Zrinski premiered on November 4, 1876, and was an immediate success. Unlike Jakov Gotovac’s Ero s onoga svijeta (Ero the Joker, the most well-known Croatian opera), it is rarely performed internationally, but it is very popular in Croatia. It is the most frequently performed opera in the history of the Croatian National Theatre in Zagreb.

The opera is named for Nikola IV Zrinski, the Croatian-Hungarian nobleman who commanded the 2,500-man army that defended the fortress of Szigetvár against the invading Ottoman army commanded by Suleiman the Magnificent. He and nearly all of his men died during the siege, which lasted for about a month and concluded on September 7, 1566, when the 600 remaining men charged from the fortress into enemy lines. Despite being outnumbered 40:1, Zrinski and his men inflicted serious damage on the Ottoman army. The battle was a Pyrrhic victory for the Ottomans: they captured the fortress, but they were prevented from attacking Vienna. More than a century would pass before they attempted to advance to Vienna again.

Zrinski’s libretto was written by Croatian writer Hugo Badalić and is based on Theodor Körner’s Zriny, which was in turn inspired by The Siege of Sziget (Szigeti veszedelem), a Hungarian epic poem written in the mid-17th century by Nikola IV Zrinski’s great-grandson, Nikola VII Zrinski. His brother, Petar, translated the poem into Croatian.

Musically, the opera combines Italian, Viennese, and Slavic influences. The influence of Italian opera is most prominent, which makes sense given the proximity of Rijeka to Italy and Zajc’s training in Milan. Zajc was especially influenced by Verdi, to whom he is sometimes compared. The only musical shortcoming of Zrinski is that Zajc does not musically differentiate between the Croats and the Ottomans. However, he does make use of leitmotifs: the “U boj, u boj!” motif recurs throughout the opera.

The first few scenes of the opera take place in Suleiman the Magnificent’s palace. The bloodthirsty sultan, despite his poor health, announces his plan to subdue the fortress of Szigetvár and advance to Vienna. News of the attack reaches the fortress. Meanwhile, Zrinski grants Lovro Juranić, an officer, the hand of his daughter, Jelena. Zrinski’s wife, Eva, promises that she and Jelena will stand by Zrinski’s side. The act concludes with a rousing number (“Junaci, braćo!”) in which Zrinski and his men vow to defend the fortress to the last man.

In the second act, Zrinski orders everyone to retreat to the old fortress and bids farewell to the new town, which will be razed. The grand vizier, Mehmed Paša Sokolović, arrives with an offer to make Zrinski King of Croatia in exchange for his surrender. Zrinski refuses, and Mehmed admits that he admires his courage. Zrinski then gives the signal for one of his men to put the new town to the torch: “Paprutović! Torch the town! Let the Turk know, as the fire flares, that our chests burn the same!” Zrinski’s men again vow to fight to the death.

The third act contains some lyrical numbers that balance the martial, heroic tone of the rest of the opera. Hidden in a vault beneath the fortress, Jelena dreams about her marriage to Juranić. When Juranić arrives to see her, she begs him to stab her, declaring that she would rather die by his hand than be captured by the Ottomans. Zrinski and Eva sing a final duet and prepare to meet their ends. The opera concludes with the famous “U boj, u boj!” (“To battle, to battle!”), in which the men prepare for their heroic last stand. The words of the song (which Zajc composed before the rest of the opera) were written by Franjo Marković, a Croatian philosopher, writer, and nationalist:

To battle, to battle!
Draw your swords, brothers:
Let the Turk know
how we die!

Our fort is burning,
The flames have reached us!
The Turkish cry is rising,
Their fury raging!

Like this fire,
Our chest is burning,
The roar is silenced
By the din of our swords!

As brother to brother,
Everyone kiss Zrinjski!
To the gate after him,
All the faithful heroes!

Now, brothers!
Let us load our guns, our pistols,
Our lightning, our thunder,
Let them roar, raze, slay!
Let us sharpen our bitter swords,
Let them cut deeper, deeper!

Good-bye now, our home,
Forever, oh, good-bye,
From all sides
The foes are rushing against you!
They want to put your holy body
Into the grave, but they will not!
All your sons go to battle for you!
Hold fast forever, homeland!

Go to battle, to battle!
To battle for our homeland!
The hellish horde
Raises its dagger against it;
To battle!
We are few but brave,
Who, who will crush him?
Death to the devil, death!

Dying for our homeland, oh, what delight!
Fight the foe! He must, must go down!

The samurai-like deaths of the men resonated with the Japanese, who were introduced to “U boj, u boj!” shortly after the First World War. The song remains popular among Japanese glee clubs. In 2006, it was performed by a Japanese male choir of 1,000 singers.

This recording is, to my knowledge, the only complete recording of the opera. (Granted, it is not entirely complete given that the ballet numbers at the beginning of Act II were omitted.) It was recorded live during a performance at the Croatian National Theatre in Rijeka. Every member of the cast is excellent, especially Kolar as Zrinski.

Whenever one is depressed by the seeming hopelessness of our situation, it helps to recall historical battles like the Siege of Szigetvár. Zrinski’s charge from the fortress of Szigetvár is right up there with the most heroic moments in history. Like the warriors at Szigetvár, we must keep fighting at all costs. The future of our civilization depends on it.