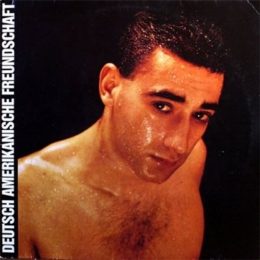 During the band’s heyday, many German (or Germanophone) acts were hitting it big in the mainstream, either in the synthpop or Kraut wave tradition. Several of these groups were also either singing in English or cutting versions of their tracks in English for the American and British markets, like Kraftwerk’s tendency to release albums in multiple tongues, or groups recording English renditions of their chart-toppers as an obvious money grab. Other groups mixed English into their original songs anyways, allowing for some level of crossover appeal; alles klar, Herr Kommisar [1]?

While the first two are very romantic, the latter seems to carry the most weight when we take DAF’s music into context. Consider, for example, the situation of López’s parents fleeing Franco’s Spain — they were antifascists — only for Gabi to come of age during a time of murder, kidnappings, and hijackings [4] perpetrated by strange kinds of Leftists. He had been thrust into a place on the world stage in which the lines between what was right and wrong in politics had not necessarily been blurred as much as they had been repeatedly crossed, leaving them irrelevant. López “became” German, as it were, because the other option was to either surrender the land that he owed his Ausbildung to to either aggrieved communists or soulless cosmopolitans. It’s a rock and a hard place.

López and Görl took far less of an outward interest in politics, opting instead for a commendable quest to identify the root of the German psyche — and then confront it during an age of national self-flagellation and confusion. There is not a single drop of bitterness to found on Alles ist gut, the record under review, despite its heavy sound, because the DAF boys were channeling not from grievances, but the visceral. Tracks like “Der Mussolini” ultimately contain no messaging other than an acknowledgment that certain things exist — like Hitler, Mussolini, communism, and Jesus Christ. “Der Räuber und der Prinz” works childlike instrumentals into the mix, a nod towards Gabi’s own confused upbringing, and what he presumes may lie unresolved in the heads of Europeans who work under Americanized globalism. “Alle gegen Alle” — covered by Laibach [5] on NATO — brings the mildly self-parodic theme home, with López gnashing about conflict over the top of Görl’s motorik synthesizer sequencing and just-so-slightly awry drumming.