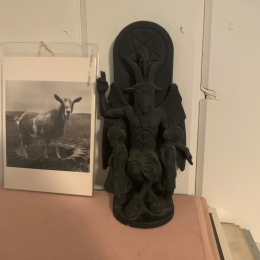 The most bizarre cultural battle of 2020 emerged last week. Frederick Joseph, a semi-prominent black author and Democratic surrogate, shared with Twitter his horrifying ordeal with an Airbnb rental over Labor Day weekend. Mr. Joseph booked a home in an allegedly rural area. When he arrived at the property he found all kinds of Satanic and occult imagery in the home.

This included a Baphomet statue, a figurine of an animal screwing a woman, strange books, “ritual material,” odd pornographic images, animal skulls, and other creepy sights. Joseph’s black family was so frightened by the place they fled and demanded a refund from Airbnb. Airbnb refused to give Joseph a refund, so he went to Twitter to air his grievances.

The ordeal reveals a funny divide within “Blue America.” On one side, we have superstitious blacks who are not down with freaky shit. On the other side are degenerate white liberals who equally love Black Lives Matter and kitschy Satanic art. Both sides appeal to the moral zeitgeist. Joseph’s defenders say his side must be believed because he’s black and lives in constant terror. His critics mock him as a narrow-minded Puritan who can’t accommodate himself to different lifestyles. The encounter demonstrates the stark differences between race-hustling blacks and the whites who deify them.

Joseph understood that his real aversion to strange figurines and ornaments was not enough to convince his progressive audience that his grievance was valid. He knew he had to bring racism into a story that involved zero racism.

There was also a bridge from the woods behind the house to the back patio.

Needless to say, we left because we are Black and not dealing with something that was:

1. advertised completely different
2. Looks like a scene from Hereditary
3. Made the entire family feel unsafe

Most reactions sympathized with Joseph, with many outraged that a black man would have to suffer such racial terror as a Baphomet statue. There were a few who mocked him for his prudishness and fear of figurines, but they were outweighed by those who consoled Joseph in his time of need. If Joseph were white in this case, his story would’ve made for easy fodder on Twitter. Leftists would laugh at this closed-minded, scaredy-cat Christian who can’t handle edgy art and statues. They would claim the theoretical white man believes monsters are under his bed and he sleeps with the light on. You always have to accept alternative lifestyles and behaviors — unless someone can claim they’re bigoted.

Which is what Frederick Joseph effectively did. The black writer eventually got his refund, but he’s still not happy with his terrifying ordeal. Vice got ahold of the mystery Airbnb host [2], who simply went by Alex, and published an article that took his side. The first thing Vice found out was that the owner is not a Satanist.

“They [the items] are not Satanic,” he said. “They’re kitsch. None of it is occult. You can get this stuff at a bodega.” Alex also told Vice he’s “agnostic” and was outraged by the religious discrimination shown by Joseph.

But if I was a pagan and someone came to my house and did this, it would be super offensive. Are they [Airbnb] cherry-picking which theologies they find acceptable? Should a person have to disclose their religion? If you’re a religious person are you expected to remove the religious iconography from your house? Because that is flat-out discrimination.

Alex said he was unsettled by the whole affair and felt that this was a fake controversy. Vice agreed. “Airbnb would likely not refund a guest who was offended by crosses, Stars of David or prayer mats, leaving open the question of whether ‘Satanic’ art, or anything a guest broadly considers to be ‘Satanic,’ ought to be treated differently,” wrote Anna Merlan, the article’s author. Merlan added that Airbnb is not a hotel service and guests shouldn’t demand that all their interior desires be met: “Some people’s ordinary taste is Satanic kitsch, and there’s no obvious reason why such people would have to remove anything that might conceivably be offensive to anyone spending money to spend time in their house and among their stuff.”

The argument demands guests not judge people on how weird they are. Pornographic images and dark decor are just things they have to put up with. If they want a generic room, get a hotel. Vice, for the most part, overlooked Joseph’s racial grievances about the incident. He was mostly portrayed as a closed-minded fool who used his large platform to attack an innocent Airbnb photo.

Joseph did not provide a comment to the article, but he did respond to it in another Twitter thread. This time he made the racism claims very obvious.

Anna reached out to me once (which I missed because I was driving).

She then wrote a deeply biased article which placed the white guy as the victim and Black guy as the villain (typical).

She never had any intent on being unbiased, as she already called the experience “dumb”. pic.twitter.com/2vyXbYsxnu [4]

Joseph claimed Merlan and the Airbnb host are both goths into the occult and they collaborated against him. He also argued the house was surrounded by white supremacists because he saw a few Trump flags on his drive in. He insisted the matter was about safety, not religion, and he should not have to pay money if he feels threatened. He denounced the white privilege of Merlan (who is Jewish) and how she demeaned the black experience of living in constant terror.

The point is that it’s not about religion it’s about safety.

You’ll never understand being a Black person showing up with Black children to a white space in a secluded area that is neighbored by white supremacists and when you walk in you see things that frighten a child. pic.twitter.com/zya3gaJRuD [6]

Had you spoken to me, I would have also said that the intersection of your personal beliefs and your whiteness is important and something you should think further about in relation to covering Black people’s experiences. @annamerlan [8]

Merlan insisted she gave Joseph 24 hours to respond and that his story was full of inaccuracies about the place. Joseph said there were ritual markings on some of the floors, which there weren’t, and argued speaker stands were ritual altars. Joseph called her a racist [10], which made her apologize to him.

The story is one of the many overblown personal disputes that would’ve never been known outside of its participants if it weren’t for social media. Joseph likely didn’t feel genuine fear, but maybe his 8-year-old brother was disturbed by the house. Knowing he would not likely get a refund for complaining about a few artworks — especially without a strong religious reason — he shifted to the most powerful tool of persuasion he had. A black person cried racism to demand their money back over imperfect service. It’s a story as old as the civil rights revolution.

All parties involved in this story are Leftists who support Black Lives Matter. Alex had a picture of Bernie Sanders in his place and his occult fascination is just to signal he’s “eccentric.” Merlan backs Antifa [11] and primarily writes on how white people are racist and anti-Semitic. Joseph is a race grifter who likely exploited this controversy to promote his new book about — what else — being black. They all share the same worldview. What separates them is their ability to handle degeneracy and how much they want to center everything around blacks.

Joseph clearly wants blacks to be treated as superior beings, perhaps even divine creatures [12], who should never be doubted. When they cry, you listen. When they’re frightened, you cater. When they demand a refund, you give in. They deserve it and their lives matter more than yours.

Alex and Merlan agree with most of it, but they don’t want to be forced to give up their weird shit to accommodate blacks. They still want to adopt Satanic art to shock the all-powerful Evangelical Occupied Government. They want their alternative lifestyles respected, not considered a threat to black lives. They consider their occult interest harmless and only Bible thumpers would say otherwise.

The fedora hat-wearers of professional Satanism agree with this sentiment. The Church of Satan Twitter account, which never fails to post Reddit-tier takes, said this in response to Joseph: “The photos in this thread depict thrift store curiosities & Hot Topic kitsch, not evidence of Satanic rituals. Sounds like you have an overactive imagination and can’t tell the difference between supernatural horror movies and reality.” The Dark Lord isn’t so threatening after all.

For Leftists, the occult is just another way to signal their difference from the historic American nation. It’s a safe avenue for maladjusted adults who never got over their teenage angst. But in the end, the interests of these weirdos are superseded by black concerns.

That’s the ultimate point of Joseph’s hilarious ordeal. Leftists can play with their Baphomet figures and feel edgy while doing it. But when it comes time for a black person to demand something from them, they better shut up and get rid of it.

That shit is scarin’ the chillun.