A Home of Their Own 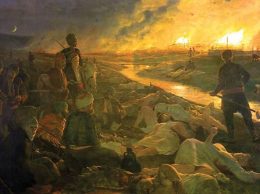 I spent a long summer in Sofia, Bulgaria to explore the area and attend a few heavy metal concerts. During my time there, I took daily walks through the city center where I passed by stray dogs, ancient ruins, and historic monuments. Many of these monuments were dedicated to the countless individuals that lost their lives during the April Uprising of 1876. Despite being a failed revolt against the Ottomans, the courage of the Bulgarian rebels was depicted in the writings of Ivan Vazov. His writings inspired events that would eventually lead to Bulgarian independence. Just like Vazov, the Dissident Right should always learn from past mistakes while honoring those individuals who take the risks in being artists and activists.

The written history of Sofia begins with the conquest of the Serdi tribe in Serdica by the Romans in 29 BC. During the decline of the Roman Empire, Serdica was invaded by the Huns, Visigoths, and Slavs. In 809, Serdica became part of the First Bulgarian Empire and was known as Sredets. The Byzantines took over the area in 1018, but the Bulgarians reclaimed the city in 1194. For the next 200 years, Sredets developed into an economic and cultural hub in the region. That all changed when the Ottomans conquered the area in 1382. Around this time, the city became known as Sophia. Between 1520 and 1836, Sophia was the regional capital of Rumelia Eyalet, one of the main provinces of the Ottoman Empire.

By the 18th century, the Ottoman Empire had failed to keep up with the science, technology, and industry of Europe. The Bulgarian population was also oppressed socially, politically, and financially. Taxes on non-Muslims throughout the Balkans were constantly increased and led to the Herzegovinian Rebellion in 1875. The inability to quell this conflict revealed the declining power of the Ottoman Empire. By the mid-19th century, ideas of nationalism were already spreading within the Bulgarian elite.

The Bulgarian National Revival was a movement that emerged in the 19th century when Bulgarian artists, intellectuals, and activists came together to unite the Bulgarian people living under Ottoman rule. Some of the initial achievements of this movement were the creation of Bulgarian schools and the publishing of textbooks in the Bulgarian language. Another focus was the emphasis of folk traditions to strengthen Bulgarian identity. Lyuben Karavelov was a writer who published a Bulgarian newspaper that collected various tales of Bulgarian history and folklore.

Ivan Vazov was one of those children who went to a Bulgarian school and was inspired by the folklore collected by Karavelov. Born in Sopot in 1850, Vazov was sent to Plovdiv to attend a school formed by Naiden Gerov, another Bulgarian writer and folklorist. Even at an early age, Vazov started writing poetry and stories about the heroes of the various Bulgarian myths and legends. After attending school, Vazov started associating with Bulgarian poets, artists, and political activists, including Hristo Botev. It was around this time that Vazov became involved with the people and events that led to the April Uprising of 1876.

In late 1875, activists of the Bulgarian Revolutionary Central Committee met in Romania to plan a general uprising against the Ottomans. The uprising was planned for the spring of 1876, and the country was divided into five revolutionary districts. For the next few months, the rebels hoarded arms and ammunition. On April 20th, 1876, local rebels attacked the Ottoman police headquarters in Koprivshtitsa and demanded the release of Bulgarian prisoners. Within a few days, the uprising spread throughout the area. Most of the targets were Ottoman soldiers and military officials since the rebels avoided civilian casualties as much as possible.

Nevertheless, the Ottoman response was quick and brutal. They mobilized troops and the Bashi-bazouks. These were Albanian and other non-Slavic mercenaries who specialized in persecuting civilian populations. These forces attacked the hometowns of the suspected rebels and murdered most of the people there. The main cities that experienced the Ottoman massacres were Batak, Bratzigovo, Perushtitza, and Panagurishte. While the total number of civilian casualties may never be known, it is estimated that at least 30,000 Bulgarians were massacred by the Ottomans. Most of the rebels were also arrested and executed. Hristo Botev, one of Vazov’s original friends in the movement, was killed during a shootout with Ottoman forces in the Vratsa mountains.

After the failed uprising, Vazov had to flee the area and went to Galați where most of the surviving rebels were hiding in exile. It was here that he started writing poems and stories based on Botev and his other friends who died fighting against the Ottomans. As a result of both the Russo-Turkish War and the worldwide sentiment against the Ottoman atrocities, Bulgaria eventually regained independence in 1878. Vazov eventually returned to Bulgaria to become a teacher and to continue his writing. Between 1881 and 1884, Vazov worked on a poem to honor the people that risked their lives for Bulgarian independence. That poem would become Epic of the Forgotten.

Epic of the Forgotten contains 12 odes that tell the stories of various rebels involved with the fight for freedom against the Ottoman Empire. Some of the later stories criticize the moral decline of the Bulgarian nation after its liberation in comparison to the brave heroes that fought against Ottoman oppression. Some of the stories even contain the Bulgarian legends and myths that Vazov enjoyed in his youth. At the same time, the rebels in the stories share many of the same characteristics as the tragic heroes in those Bulgarian folktales.

After the success of Epic of the Forgotten, Vazov started writing a novel based on his experiences before and after the April Uprising. The novel would eventually be published in 1888, and was aptly titled Under the Yoke. The novel is set in a small Bulgarian town during the months before the April Uprising. The story follows Boycho Ognyanov as he is released from prison and returns home to take part in the uprising. He encounters old friends, new enemies, and the love of his life. The novel depicts Bulgarian life under Ottoman rule and delves into the emotions and motives behind each character’s support or rejection of the rebellion. The book also has a lot of autobiographical elements, as Ognyanov’s experiences mirror much of Vazov’s own life during his time as a writer and activist. Under the Yoke is one of the most famous works of Bulgarian literature and it has been translated in over 30 languages.

After working online during the day, I would read the dual-language versions of Epic of the Forgotten and Under the Yoke. After reading these books for an hour each day, I would go to a local restaurant that served Bulgarian cuisine. Along with a glass of Mavrud wine, my evening meals consisted of kyufte, gyuvech, kebapche, and moussaka. For dessert, I often had baklava with a shot of rakija.

After dinner, I would walk along the National Palace of Culture and give dog treats to the stray dogs in the area. I would continue down Vitosha Boulevard where I would eventually pass the Ivan Vazov National Theatre and the Statue of Sveta Sophia. I then walked to the Serdica Metro Station where parts of a Roman amphitheater were discovered in 2004. The metro walkways were built around the excavations, so I got to walk along the excavations each evening and experience what life might have looked like in Serdica under Roman rule over 1600 years ago.

I would then walk towards the Alexander Nevsky Cathedral and the Saint Sophia Church. Next to the Saint Sophia Church is Vazov’s grave. His grave is in the form of a large stone from the Vitosha mountains where Vazov enjoyed taking walks. Across from Vazov’s grave is the Monument of Bulgarian Volunteers, which is dedicated to all the people who fought against the Ottomans in the Russo-Turkish War. Across the street is the Monument to the Unknown Soldier and it is dedicated to the thousands of Bulgarian soldiers who died defending their homeland. Both monuments have quotes from the various works of Vazov.

Overall, the April Uprising of 1876 failed due to poor organization, limited resources, and bad decisions. Most of the rebels were arrested and killed while thousands of Bulgarian civilians were massacred in retaliation. After these conflicts, Vazov won over hearts and minds, not by glorifying violent revolutions, but by explaining the emotions and hopes of ordinary individuals wanting a homeland of their own. Individuals that were willing to risk their lives so that their people could have their own land and sovereignty.

We understand that the anti-white establishment controls nearly all the institutions of society and nearly all aspects of modern life. Yet we in the Dissident Right have the sole credibility of being the real underdogs and the true rebels. There is an aspect of human nature that always wants the hero to overcome impossible odds and save the day. Whether that is slaying a dragon to rescue a princess or creating our own art to combat anti-white propaganda, we all have a role to play in recapturing our lands, resources, and sovereignty. Let us always learn from our past mistakes and failures. But let us also honor and commemorate those artists and activists willing to take the risks in securing the existence of our people and a future for white children. For every activist like Botev that falls in a blaze of glory, let there be 99 artists like Vazov that live to tell his tale.

Near the end of my summer in Bulgaria, I eventually got to see Slayer on their farewell tour. One of my favorite Norwegian black metal bands, Satyricon, ended up being the opening act. I had a great time seeing both bands while chatting with various Bulgarian metalheads at the concert. As I walked backed to my apartment after the concert, I decided to take one last look at the monuments near Vazov’s grave. I saw a stray dog sleeping next to the eternal flame of the Monument to the Unknown Soldier. I took it as a sign and a reminder of why we do all the things we do in this community.

As a wanderer, dissident, and white nationalist, I hope that all stray dogs, heroes, and people find a home of their own.