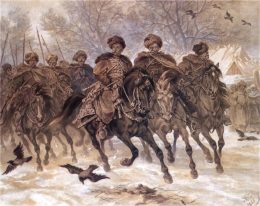 When I first moved to Eastern Europe, I did not have any friends in the region. Thus, I spent the winter of 2017 in solitude. To avoid any feelings of loneliness, I set a goal to finally read Henryk Sienkiewicz’s trilogy of historical novels. I also set a goal to go for a walk each evening. Whether I was in Lviv, Rzeszów, or Minsk, I kept walking past statues of Adam Mickiewicz. In many ways, Sienkiewicz and Mickiewicz inspired me to become a wanderer, dissident, and white advocate. Their writings also give insight into the nature of empires and how we in the Dissident Right can combine art with activism.

When I first arrived in Eastern Europe, I spent the first few months in Lviv, Ukraine. The city withstood various invasions and sieges during the 17th century. In 1648, an army of Tatars and Cossacks invaded the city. In 1672, Ottoman forces surrounded Lviv but failed to conquer the city. In 1675, the Ottomans returned but were defeated at the Battle of Lwow by King John III Sobieski of Poland (with the help of 1700 Hussars). Henryk Sienkiewicz wrote three historic novels about these invasions: With Fire and Sword, The Deluge, and Fire in the Steppe. In Poland, these novels are referred to as the “Trilogy.”

While living in Lviv, I read With Fire and Sword. The novel is set during the Khmelnytsky Uprising, where Bohdan Khmelnytsky led a Cossack rebellion in the eastern part of the Polish-Lithuanian Commonwealth between 1648 and 1657. This uprising eventually led to the creation of the Cossack Hetmanate in Ukraine. Allied with Tatars and Ukrainian peasants, Khmelnytsky fought numerous battles against the Commonwealth in various cities, including Lviv. It was exciting to read the novel in Lviv because the city is such a large part of the plot.

After reading a chapter each evening, I usually walked to a restaurant chain called Pyzata Hata to have borsch and chicken Kyiv. On my way to the restaurant, I would take my garbage to the recycling bins down the street. I often saw an old Ukrainian woman who sorted through the bins to look for glass bottles to recycle for money. When I saw her there, I gave her my empty beer bottles, along with whatever change I had in my pockets. Every time I did this, she thanked me and made the sign of the cross and would look up. Above us was a tall pillar and a statue of Adam Mickiewicz.

Mickiewicz was a Polish poet, professor, and political activist. He is regarded as a national poet in the countries that were part of the Polish-Lithuanian Commonwealth. His most famous works are “Dziady” (Forefather’s Eve) and the national epic poem “Pan Tadeusz.” These poems inspired nationalist sentiments and criticism against the three imperial powers (Austria, Prussia, and Russia) that partitioned Poland at the end of the 18th century.

Being born in the Russian-partitioned territories, Mickiewicz spent most of his life in the struggle to achieve independence for his region and his people. After being deported to central Russia for five years, he spent many years abroad with other artists and nationalists in Rome and Paris. Whether sneaking into countries with fake passports, giving lectures on Slavic folklore, or publishing banned newspapers, Mickiewicz’s life was as captivating as his writing. Mickiewicz’s importance extends beyond poetry into the broader realms of culture and identity. Despite a few lonely nights in Lviv, I enjoyed my nightly walks downtown where I always passed by Mickiewicz.

After a few months in Lviv, I found an apartment to rent in Rzeszów, Poland. Rzeszów was given city status by King Casimir III of Poland in 1354. The city was burned to the ground by Tatars in 1458 and again in 1502. In 1638, the powerful and wealthy Lubomirski family acquired various properties in Rzeszów and converted the fortress there into a castle. Yet within a few decades, Rzeszów would be devastated again during the Second Northern War between Sweden and the Polish-Lithuanian Commonwealth from 1655 to 1660. The numerous conflicts between Sweden and the Commonwealth would be referred to as the “Deluge.” Sienkiewicz based his second novel of the Trilogy on this name and its events.

The Deluge tells the story of a fictional character named Andrzej Kmicic who ends up fighting along with historic leaders during the Swedish invasion and occupation of the Polish-Lithuanian Commonwealth. In 1655, King Charles X Gustav of Sweden invaded the western part of the Commonwealth and turned the Grand Duchy of Lithuania into a Swedish fiefdom. The Commonwealth armies in the region were defeated and King John II Casimir of Poland fled to the Habsburgs before slowly regaining territory in 1660. The main characters of the novel often travel through Rzeszów and even have a few action sequences there. Many characters from With Fire and Sword also return, including Jan Zagłoba, my favorite character of the series.

I found a family-owned Ukrainian restaurant near my apartment that also served Polish dishes. After delicious meals of bigos, gołąbki, and pierogi, I took a nightly walk past the Rzeszów castle to the market square in the old-town area. A block away from the market square was a statue of Mickiewicz. I only found this statue because I was exploring the downtown area and got lost. Nevertheless, I made it a point to walk past his statue each night. On the way back, I walked past the Revolution Monument (known as wielka cipka in Polish, due to the monument’s shape) and a dog park. Since I was in Poland, I exercised each morning while listening to Polish metal bands from the 80s such as KAT and Turbo, along with all the infamous Polish black metal bands like Graveland, Infernum, and Veles (R.I.P. Tomasz Galdia).

After a few months in Rzeszów, I heard that Belarus had just extended its visitation period to 90 days. Manowar also had a scheduled tour stop in Minsk the following month. Therefore, I decided to spend the next three months in Minsk. I rented an apartment next to Victory Park and the Great Patriotic War Museum. The best way I could describe this area would be as a gigantic, communist Disneyland. The museum stands on top of a large stairway with gigantic statues with machine guns and communist emblems. Regardless of the iconography, the museum is surrounded by a park that has various paths and walkways for pedestrians. I got a lot of exercise walking around Victory Park each evening. Yet it took a few days for me to notice a statue in the park of a man sitting on a bench. The placard next to the statue identified the figure as Adam Mickiewicz. I took this as a sign to finish reading the final book in Sienkiewicz’s Trilogy.

Fire in the Steppe takes place during the Polish-Tatar War (1666-1671) and the Polish-Ottoman War (1672-1676). The novel depicts the increasing weakness and disorder of the Commonwealth in the mid-17th century. By this time, the Commonwealth had become a declining empire too large and too diverse to effectively protect the Polish lands and people. The novel (and the entire Trilogy) also describes how the aristocracy and Sejm (the Commonwealth’s parliament) were more concerned about bribes and titles than defending their territories from invasions. Most of the fighting was left to John Sobieski, who privately financed most of his own troops and defenses. In 1674, he was elected as the King of Poland and ruled as King John III Sobieski of Poland and the Grand Duke of Lithuania. He fought various battles against the Ottoman Empire. Yet even Sobieski would be unable to save the Commonwealth from decline. After four partitions in the 1790s, Poland would be partitioned off the map until 1918.

Both Mickiewicz and Sienkiewicz lived in a time where their language, culture, and identity were on the verge of extinction. Mickiewicz risked his life to be a dissident and his writings and poetry inspired his people to stand up for their land, sovereignty, and identity. The January Uprising of 1863 was an insurrection against the Russian Empire to restore the Polish-Lithuanian Commonwealth. Most of the artists, intellectuals, and activists involved in the uprising described the works of Mickiewicz as their main source of inspiration. After the uprising was quelled in 1864, a new movement of Polish Positivism began. This movement consisted of a group of artists who promoted nationalist ideas through art and literature. Sienkiewicz played a large part in this movement. He wrote historical novels about Polish heroes coming together to fight invasions and protect their homelands.

It is now time for us to stop the invasions of our ancestral homelands. It is now time for us to unite as ethnic nationalists and white advocates to stand up for our lands, resources, and sovereignty. Many of our countries are like the empires of the past that expanded too far, became too diverse, and ended up destroying the cultures and people who created them. Without Polish people, there can be no Polish nation. Without white people, there can be no Western civilization. Whether it is through art, activism, or a combination of both, we all have an important role to play in securing the existence of our people and a future for white children.

This February, I traveled to Vilnius to take part in the Lithuanian Independence rally with some activists and content creators in our community. I had to take a taxi from my hotel to the area where the rally was starting. On the ride over, the taxi drove by the Church of St. Anne. As I looked out the window towards the church, I saw a statue of a familiar figure. After some research, I found out that it was a statue of Adam Mickiewicz. I then thought about the first winter I spent in Eastern Europe two years ago. I laughed to myself and smiled. I still have a long way to go on my journey as a wanderer, dissident, and white advocate. But at least now I have some friends.

All thanks to three cities, two writers, and one winter of solitude.