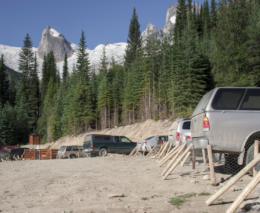 The aphorism “Never let a crisis go to waste” may soon have historic consequences beyond what most of us can imagine. Maybe as soon as November.

The first part of this series, “Trump Should Wargame Secession, Too [1],” outlines the various ways President Trump should prepare for the slim possibility of mass Left-wing defection along the West Coast after a close call in the 2020 presidential election. In many ways, this essay takes as its starting point Greg Johnson’s “In Praise of Calexit [2]” and describes how any serious analysis of West Coast secession should also consider how most East Coast blue states may want to secede as well, causing general havoc in the soon-to-be-former United States.

Keep in mind that these are best and worst cases for Trump and his civic nationalist base, not necessarily for white Americans in general or white nationalists in particular. Of course, if Trump were to crush Left-wing secession with minimal US casualties and maximal insurgent casualties, I am sure everyone Center and Right — white nationalists included — would be pleased. Nonetheless, the worst-case scenario for whites in North America would not necessarily hinge on victory for either side but on the bloodletting that would ensue in a drawn-out conflict. Who cares if US forces emerge victorious after a three-year struggle to keep the West Coast? Tens, if not hundreds, of thousands of white lives would have been extinguished preventing bomb-throwing Antifa crybabies, chemically-demented anarchists, gender-fluey pronoun warriors, Reconquista-minded Mexicans, cash-addled Hollywood Trotskys, and upwards of 2.61 million black people from practicing their God-given right of freedom of association.

Instead of being permanently free of people who wish to kill, exploit, or subjugate them, whites would have to pay in blood in order to keep such people around. Where’s the sense in that? The last thing white people need is for Donald Trump — or any president — to think he’s the next Abraham Lincoln and envision his face being plastered on the five-dollar bill. Yes, a house divided cannot stand — but no house lasts forever, and some should be demolished to make way for something better.

In the highly unlikely event of secession in November, if Trump does ignores my sage advice regarding splitting up the country, then we are talking about Civil War 2.0. We’ll know in the early going how serious this is. If Trump can wrap it up within two or three weeks with our present military, fine. Doing nothing in that circumstance would clearly be the most prudent choice. The war might even be enjoyable to watch. However, if the war looks like it won’t end soon and would likewise be very costly on both sides, then everyone on the Right should consider something entirely radical:

Why don’t we secede as well?

You can buy Spencer Quinn’s novel White Like You here [3].

Imagine several heavily-armed, well-stocked, Right-wing autonomous zones springing up during a crisis like this. Imagine a bloodless takeover of several towns or even a state capital. Would the federal government have the time and resources to deal with such forays while struggling with paramilitary Leftists on both coasts? Would state governments be able to go Waco on these compounds while Black Lives Matter and Antifa stage riots and looting sprees everywhere? It seems to me that the Left attempting to crack off both coasts like a walnut shell offers plenty of opportunities for the Right as well.

Of course, Right-wing secession would take planning, money, time, and effort. What wouldn’t? But if we can get enough ex-military, pilots, engineers, physicians, programmers, farmers, and other smart, tough, self-reliant people talking about it and preparing for it, even just a little bit, then perhaps when the time is right, a critical mass of such people can get the avalanche started. And when the country is already in a precarious position, as in a civil war, what better time would there be?

Until this very moment, as I am typing out these very words, I have believed that Antifa, BLM, and the militant Left in general are the despicable enemies of civilization. But now, I am not so sure. Certainly, they are evil, and in a shooting war would need swift killing. But what if, by shaking the foundations of Western society so vigorously, they are inadvertently serving the interests of the true Right? What if, by wreaking so much havoc, they are offering the Right a precious opportunity for achieving its most important goal: Escape.

Note that this goal is not military victory, nor is it a white ethnostate. At least not yet.

Allow me to explain.

Western Civilization is dying. We all know this. This is an irreversible process. Much has been written on the topic, so little review here is necessary other than to say that without the creators and inheritors of this great civilization — that is, white people — it is unlikely it will survive. A near-majority of whites today have embraced this death spiral and are committed to various forms of dysgenic, ethnomasochistic, and self-destructive behavior. I’d like to think that articles like this one have a prayer of turning some of these people around, but that’s too much to ask. It’s too late for the vast majority of them. This will soon put the remaining whites — those who remain loyal to Western Civilization, its religions, ideals, and traditions — in the minority in their own nations. To fight against this trend by force of arms would seem futile. In fact, it has already been tried on a large scale three times and resulted in nothing but failure: the American Civil War, the Russian Civil War, and World War II. (Perhaps in these cases, the forces of conservatism and reaction — i.e., the Right — were more concerned with military victory than escape, which could be why they lost.) And as the Left creeps its way to demographic dominance through non-white immigration, each day that passes marks a decreased chance for military success against the Left.

Better to get away than to get even. I have such faith in whites that after a couple of generations of detox, away from the pernicious presence of the Left, we’ll be ready to accomplish great things again. But first, we have to get away. We have to survive and prepare and make babies and — most importantly — not spill our blood in self-destructive wars.

Now here’s a question: under what circumstance would this escape be more plausible? After a far-Left Democratic Party takes over two houses of government and is able to curtail our freedoms and employ the full weight of the US government and military against dissidents? Or during the brief turmoil when the Trump administration has its hands full dealing with Leftist secession on both coasts?

One thing that I like about this idea is that it replaces the common Right-vs-Left paradigm with a relatively novel one: Right-and-Left-vs-Center. In effect, by seceding during such a crisis, the Right would be working in tandem with the Left, with only the center holding it back from its goal of escape. And will the center hold? Well, we all know what William Butler Yeats thought about that.

“The Second Coming,” first stanza, once again, with feeling:

Turning and turning in the widening gyre
The falcon cannot hear the falconer;
Things fall apart; the center cannot hold;
Mere anarchy is loosed upon the world,
The blood-dimmed tide is loosed, and everywhere
The ceremony of innocence is drowned;
The best lack all conviction, while the worst
Are full of passionate intensity.

In the first four lines of this great poem, Yeats was referring to the October Revolution and the chaos and devastation it “loosed upon the world.” When times are in violent transition, it is true that the center cannot hold. People who consider themselves centrists or moderates (the “best,” as Yeats puts it) often do lack conviction during such critical times. They’d rather preserve their innocence and go to Heaven when they die than get their hands dirty and fight (like, presumably, the worst of us). They’d rather take advantage of the trembling peace and prosperity around them than seek to forcefully stabilize their world. Of course, there is nothing morally wrong with this. My point is simply that if a committed, well-armed, separatist-minded Right is faced mostly with namby-pamby moderates during a time of turmoil, the Right will have a hell of a chance.

[Pauses for the gasping, cursing, and clutching of pearls among my legions of Counter-Currents readers to die down. I love you all! xoxo ???? — SJQ]

Again, allow me to explain.

I envision our goal of Escape as Stage 3 of what I call the ISEE Model of White Survival. “ISEE” stands for “Imbalance,” “Struggle,” “Escape,” and “Ethnostate,” and spells out the four stages of how a white ethnostate can be put into place. Here is a graphical representation for all you visual learners out there: 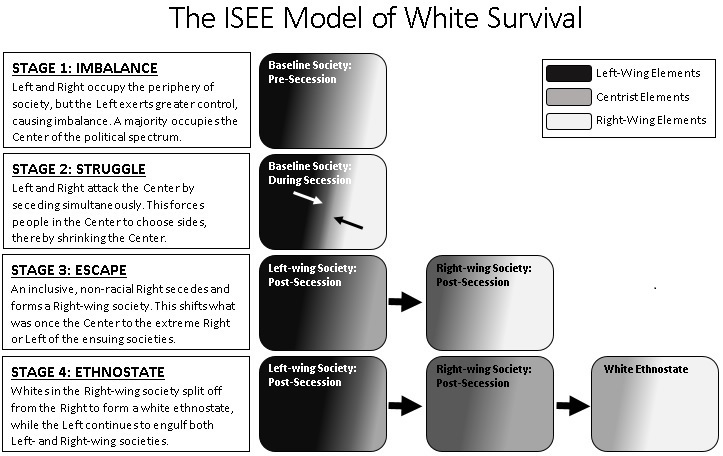 Since Ethnostate is Stage 4 and Escape Stage 3, it would make sense that anything jeopardizing Stage 3 also jeopardizes Stage 4. As such, the secessionist-minded Right should be as inclusive as possible and accept as many conservatives, traditionalists, alt-lightists, and anti-Leftists as it can. At this point, the essence would be to attain the manpower, weapons, money, and material to properly secede. So mouthing off about the gloriously high walls of the fabled Whitemanistan during Stages 2 and 3 might be a tad counter-productive and scare away people who could potentially help us. Race should not be a deal-breaker at this point, although it almost goes without saying that the secessionist Right must have a significant white majority to begin with in order for the ISEE Model to work — my guess is at least eighty percent. Finally, if the breakaway Right-wing society proves to be viable after several years and is able to withstand the external threat of the Left-wing baseline society, then and only then can whites start planning to form a real white ethnostate. Without the Left hampering their every thought and action, ethnocentric whites would — again — have a hell of a chance.

One advantage of the ISEE Model is that it is portable. It does not have to apply to the highly-unlikely prospect of Democrat secession in November. It can apply whenever an oppressive, anti-white baseline society is dealing with turmoil. I know many on the Right like to consider “the Left” as some monolithic force being controlled remotely by a cabal of Jews behind a curtain somewhere. But in reality, the Left in America is a multiracial, multicultural coalition that includes various demographics known for not playing well with others. It could crack up at any point. Who’s to say that in ten or fifteen years the Left won’t begin to squander its supermajority in racial and ethnic squabbles that turn violent? Such a chaotic circumstance would be the perfect time to implement ISEE.

Like Greg Johnson’s “Slow Cleanse [4],” the ISEE Model makes a white ethnostate its goal and allows for a good deal of time in achieving this goal. The Slow Cleanse is certainly preferable since its scenario is entirely peaceful and civilized. The ISEE Model, on the other hand, takes advantage of disruption caused by the Left and would likely be less peaceful, at least at first. It would require force of arms, like many historic crises often do. ISEE’s most interesting aspect, however, is that, with the Left threatening secession in various ways [5] today, whites can start envisioning the ethnostate process sooner rather than later.

Perhaps it can start as soon as this November.