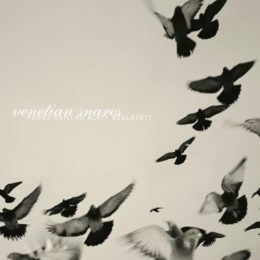 Venetian Snares is the working name of Canadian music producer Aaron Funk. Funk is best known for producing in the style known as breakcore, which comprises the bulk of this record. “Breakcore” is a semi-recent style developed when new possibilities afforded by sequencing and music production technology allowed artists to create rhythms that are impossible to replicate in real-time. Several layers of percussion are placed atop each other, often overlapping in ways that lead to obtuse time signatures, in order to create a pummeling, disorienting effect through a rapid-fire volley of percussion. The emphasis in breakcore production is often on the snare drum — nodded to in Funk’s “Venetian Snares” moniker — and breakcore percussion is often created through various chopped, sped-up, or flipped variations on the famous Amen break [1].

Some of the genre’s best-known exports include Aphex Twin, Squarepusher (recently discussed [2]), and μ-Ziq, with Mr. Funk earning himself a distinguished title among these same heads. Funk’s output, however, tends to run more in a bit more of a Dadaist and occasionally irreverent direction. He can be a bit caustic, both in production and in themes (the earlier Winnipeg is a Frozen Shithole is a personal favorite) and has been justifiably accused of leaning heavily on pre-established break patterns in order to make his records. Rossz Csillag Alatt Született — a Hungarian title rendered into English literally as “born beneath a bad star,” corresponding roughly with the expression “cursed from birth” — is a bit of a break from these tropes in his discography, however, and a sign of the maturity that Funk would develop as a musician in years to come.

Rossz was produced after a particularly moving trip that Funk made to Hungary just prior to this album’s release in 2005. Funk’s visit impacted the production of Rossz in several ways — perhaps the most intriguing is his use of several Hungarian classical music samples in the production of his tracks, pairing the string work of Bartók Béla with other musicians in the period — Stravinsky, Mahler, et al — to create violent, impossibly fast rhythms with remarkable melodic flourish.

The title and the tracklist are all in Hungarian, a touch that adds both mystique and weight to the album’s myriad qualities. The album’s track titles are obviously an enigma for the Anglophone world, and their English translations ran the gamut from mysterious, to revealing, to plainly descriptive.

Breakcore is inescapably one of the most modern forms of music there is. The tracks that make up the genre’s canon are deliberately impossible to play with real instruments, are often skull-crushingly brutal in their composition, and invariably rely upon interpolation and remixing of pre-existing sounds to complete a track. I would like to suggest that this does not make breakcore an inherently bad development in the Western musical repertoire, however. Breakcore is about pushing limits — specifically, the limits of the listener, the world around him, and the methods of production used to create the track at hand in a sort of meta-inquiry about what music is, both in general and to the listener.

The many tracks that make up Rossz — there are 11, for a runtime of 46 minutes — fall into three distinct styles, each with their own high point. Introductory “Sikertelenség” — “failure” — is tonally upsetting and sparse, acting as the perfect introduction to things to come. Percussion-free diversions include passages of spoken word or experimentation in harmony. There is never a moment on Rossz in which you are left unsurprised.

Thematically, Rossz’s more energetic tracks, including the glorious “Hajnal” — “dawn” — and other bombastics, like “Szamár Madár,” bridge a psychological gap between the beautiful and the grotesque with a mastery that is not often seen in any kind of music, let alone in a genre as inclined towards hedonistic banality as this one. At once, there is unspeakable serenity — the strings of Funk’s deft sampling of Stravinsky and Bartok speak to the sublime and the numinous, reaching sonic peaks yet always hinting at more. “Hajnal” is quite the weapon, containing undeniably beautiful strings, jazz diversions, and ingenious use of noise and layering. It is the crown jewel of this record.

Yet there is also unfathomable terror to be had in these songs, “Hajnal” included. The endless pummeling of the breakbeat crashes madly about one’s ears, yet it never necessarily interrupts the spectacle, though it can take one by surprise. One can look around the modern world and still find breathtaking beauty, yet the anxieties of our lives still linger beneath the surface of our experiences. There are gorgeous vistas and exhilarating journeys to be had in life — these are the soaring strings of Mahler’s 3rd and the Stravinsky’s works for clarinet. But there is also our own restlessness and madness — can I pay rent this month? Will I get the job? Does she still love me? Is America falling apart? — clawing at our psyche; these are the face-melting bombardments that underpin the whole experience.

Rossz is one of the most cathartic records ever, not just because it manages to capture these paranoias and highlights with such a rich musical language, but because it manages to do so without tossing down a pit of despair. These brutal drums — our fears — are an invitation to go nuts for a few minutes, knowing that we are still in charge of our destinies, chaotic as life may seem. Funk has managed to turn deep-seated tension onto its head, making restless ennui into a musical palette.

Bleakness, however, is to be had in equal parts. Funk handles life-shattering tragedy and daily malaise with unforgiving gloves — the death of one’s lover and ensuing contemplation of suicide are found on “Öngyilkos Vasárnap,” literally “Suicidal Sunday.”

“Öngyilkos” is a curious song, as it is a remix of a Billie Holiday cover of an alternate version of an old Hungarian song, “Szomorú vasárnap,” composed by Jewish pianist Seress Rezső in 1933. Seress’ version is about war and destruction. The modern incarnation of the song, the one Holiday sings a translated version of, is typically translated into English as “Gloomy Sunday,” liberally interpreted from the lyrics poet Jávor László penned to the music. Funk’s rendition maintains much of the melody from the original, occasionally splicing Holiday’s lyrics, and melds the melody with a snappy, focused break that diverts into spasticity only after the emotional weight of each verse has been allowed to set in.

“Öngyilkos” is both an example of mind-numbing globalization — the original Hungarian song has been twisted beyond all recognition, made into something of a curiosity for the autistic music researcher to uncover. (Err. . .) But it is also an example of the creative energies of Europeans. The same Amen break Funk employs on Rossz was also heavily spammed on the first N. W. A. album. It was Funk’s idea to reach into the past and uncover something that contained the spirit of the nation that inspired him to produce this music. It’s an old Hungarian urban legend that “Szomorú” drove countless people to take their own lives. Funk breathed new life to it; though he did have a little help from a black singer in the process.

More to the point, however, is the “bird” suite — the tracks “Galamb Egyedül,” “Második Galamb,” and “Szamár Madár” — “Pigeon, Alone,” “Second Pigeon,” and “Stupid Bird.” Take the narration of “Második”:

The delirious narration of the frightened, confused woman is left ambiguous and unsettlingly pained, resolved only through the explosive percussion that comes in the suite’s final track, “Szamár.”

Perhaps Funk was deliberate in failing to expound any further on this generalized malaise, providing release from his torturous interludes only in the form of his breaks — itself a rich euphemism for our self-contained turmoil. Perhaps the answer to a world full of beauty that is, all the same, drenched in things gone terribly wrong isn’t to find any words. It is to rage, rage, rage — and see if you’ve done something right once the dust you’ve kicked up settles.

All told, Rossz Csillag Alatt Született is one of the greatest — and yet, one of the most modern — albums of all time.