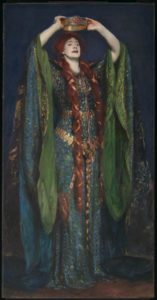 Come, you spirits
That tend on mortal thoughts, unsex me here,
And fill me from the crown to the toe top-full
Of direst cruelty! make thick my blood;
Stop up the access and passage to remorse,
That no compunctious visitings of nature
Shake my fell purpose, nor keep peace between
The effect and it! Come to my woman’s breasts,
And take my milk for gall, you murdering ministers,
Wherever in your sightless substances
You wait on nature’s mischief!

Who says that high culture has to be boring and hoighty-toighty? My own favorite Shakespeare play is his shortest and most violent. Yes, I am talking about the infamous Scottish play, whose name must not be said aloud, lest we have to go through a painful ritual [1] to ward off the bad juju it brings. If you’ve not seen or read Macbeth (Aaaah! Hot Potato, off his drawers, pluck will make amends), stop here and go read it. This article will assume you know what goes on in the play and that you’ve got a basic high-school understanding of the normie interpretations. Just don’t, under any circumstances, watch the Roman Polanski movie adaptation. Polanski, aside from being a rapist pedophile, is also guilty of transforming the most entertaining Shakespeare work into a vulgar snoozefest.

The unsexing of Lady Macbeth is usually taken to refer to mean unwomaning; Lady Macbeth exhorts the spirits that tend on mortal thoughts to make her more into a man, ruthless and remorseless. She asks of them to transform the milk in her breasts into gall, so that she may better commit her murder. Many such interpretations have been thrown about throughout the years, with the most annoying and most prevalent one being the trite feminist bullshit about Lady Macbeth having internalized the narrative of female weakness and believing in the necessity of unwomaning herself in order to commit murder, whereas if she’d been born in our enlightened time, she’d know that one isn’t born, but rather becomes a woman [2]. By the way, a woman is just as capable of murder [3] and treason [4] as a man. I wish we had a superstitious chant to wash that bullshit away, but I don’t think hot potato off his drawers is gonna work here.

But allow me a bold assertion here. The feminists are right in one aspect: one doesn’t need to be a man in order to commit murder and treason. In fact, for a given definition of treason which also includes treasons against friends and family, you could claim that women are likelier to commit treason, and they’re certainly no strangers to murder, whether by manipulating men into murdering on their behalf or drowning their babies in the bathtub. And Simone de Beauvoir is right in one respect: there is a certain becoming to the Ausbildung of a woman. Now, dear old Simone would have you believe that denaturated woman is a blank slate, and that woman is a social category created by the evil patriarchy, indeed, one that all girl-children are shoehorned into when they’d rather be doctors, lawyers, accountants, and lady philosophers. To that, I can only respond that the patriarchy-induced transformation isn’t from genderless tabula rasa to meek and submissive woman, but rather from rapacious, id-driven hypergamous demon to meek and submissive woman.

If you haven’t read F. Roger Devlin’s Sexual Utopia in Power [5], stop and go read it now. But here’s a crash course anyway: The male sexual utopia consists of owning an infinite harem of nubile young women. The female sexual utopia is belonging to an infinitely powerful man. In nature, men fight and kill each other for status and the right to monopolize female attention, whereas women jockey for the attention of the highest status man in the group. Now, while female sexual attractiveness lodes on genetic fitness and fertility and is therefore completely visible, male sexual attractiveness lodes on societal status (genetically determined, but don’t tell anyone, especially not yourself), which can be faked. The “fake it till you make it” attitude of the manosphere works, because the question “where do you get your balls” doesn’t need a truthful answer.

However, women have evolved a powerful mechanism that defends against fake status: the shit test.

In the words of the pimp, bitches give you shit to see if you’re the shit. They’ll start drama to gauge your reactions and thereby determine your position in the status hierarchy in order to know whether to stick with you or to look for someone higher in status. PUA and manosphere lore would have you believe that shit tests are something that you have to pass to make it with a woman — and this is true — but few will tell you that women will keep on shit testing you for as long as they can trade up, or believe that they can trade up. That’s how happy marriages go down the tubes: husbands failing shit tests.

In case anyone is wondering, “you are not a man if you don’t betray and kill your king” is a shit test. It is, indeed, the second-toughest shit test on the planet, for the king is the supreme alpha of the land. The only tougher shit test would probably entail betrayal and murder of God, the supreme alpha of the universe. The only proper response to this I can think of is “shut your mouth, woman,” followed by an activity that is illegal in most developed countries. More technically, the woman should be disabused of her hypergamous ambitions by being reminded that her man may not be the supreme alpha of the land, but he is the supreme alpha of the house, and as such, to be obeyed in all circumstances. Naturally, in a healthy patriarchal society, the king, the law, and general codes of honor actually stand behind man’s dominion over women. The applicable rule in this “go kill your king” context would be some variation of “bros before hoes.”

Now we get to why Lady Macbeth is dripping with sex all over. Her husband fails a shit test, which means she’s fair game — res derelictae, in legalistic jargon — property up for grabs. It tells you, humble audience member and specifically your polygamous male hindbrain, that she’s DTF [6]. That’s why Macbeth is sizzling with sexual tension, even though nothing explicitly sexual happens; something implicitly sexual happens, a power struggle at the highest levels of society, and you just know that some smoking hot babes are gonna change hands when everything’s said and done. The primal ape can smell blood in the water. Oh, Bill Shakespeare, you clever, dirty boy.

“But doesn’t he kill the king and become king himself, thereby becoming supreme alpha?” you ask. Well, sure he did, but in doing so, he violated the honor code that governs all gangs of men, regardless of size and formality. In doing so, he removed himself from the gang and became an outsider — and a man with no gang is always, without exception, lower in status than a man with a gang. Even if all you do is get the phone and buy the other guys cigarettes, revenge against those who wrong you is bound to their sacred honor. Tough guys who fancy themselves lone wolves often learn the hard way about strength in numbers, flanking, and surround maneuvers. And indeed, this is what happens to Macbeth. All of Scotland unites against him, the trees start moving, no man of woman born, and then he gets his head cut off.

But back to Lady Macbeth. What does “unsex me” mean? I posit that it doesn’t mean “strip my fragile and merciful femininity away,” but that it means “strip my patriarchal conditioning away.” Kill Mary and reveal Lilith, the dark, Dionysian, hypergamous, child-murderous demon underneath. Tellingly, she invokes spirits, dark forces which wait on nature’s mischief, wispy and lunar entities kept at bay by Apollonian patriarchy. The Weird Sisters aren’t the only witches of the Scottish play. Lady Macbeth seeks to cease being the Second Sex, made into a woman and subjugated to male authority, but to be what she primordially is, a status-maximizer and ruthless self-eugenicist. Consider the woman who demands the three sixes: six-figure income, six feet minimum height, and a six-pack in a potential mate (and that’s the bare minimum). And what about the “out, damned spot” thing? Well, I posit that it’s no more than the medieval Scottish version of “I done goofed.” Lady Macbeth fought the patriarchy and the patriarchy won. If only she’d kept her hypergamy in store for the 21st century, where we have full-blown gynocracy.

We are under assault not only as whites, but also as men. One of the greatest victories of the enemy has been the successful disarming of the patriarchy as an apparatus of turning Liliths into Marys, or at least Eves. Whatever structures carry on our people’s fight into the future must look to the lessons in male-female relations, woman-wrangling, and the imposition of patriarchal sexual morality we have gleaned from our struggle. An important part of it is the deconstruction of anti-patriarchal interpretations of old European art and literature, such as the work of William Shakespeare. We cannot win if we cannot reproduce, and we cannot reproduce until we once again take mastery of our womenfolk.