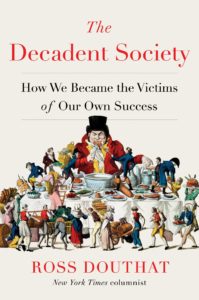 Ross Douthat
The Decadent Society: How We Became the Victims of Our Own Success
New York: Simon & Schuster (2020)

Never-Trumper Ross Douthat is a faux-Christian, faux-conservative writer for leftist publications like The Atlantic and The New York Times. His presence at those publications is akin to that of the house Negro, that is, to provide the appearance of objectivity without ever seriously challenging the accepted Leftist narrative of events. In his latest book, The Decadent Society: How We Became the Victims of Our Own Success, Douthat posits the entirely unoriginal thesis that the Western world has lost its élan vital and has become decadent. This decadence is characterized by technological stagnation, declining birthrates, political gridlock, and the collapse of artistic creativity.

While Douthat’s thesis may come as a shock to the readers of The Atlantic and The New York Times, it is self-evident to anyone with even a semblance of self-awareness and just a passing familiarity with the works of Oswald Spengler and Giambattista Vico. In reality, Douthat doesn’t seem to be that much bothered by the decadence he illustrates. Indeed, the book might have been more accurately given the Seinfeldian title of The Decadent Society: How We Became the Victims of Our Own Success, Not That There’s Anything Wrong with That.

It’s hard to take seriously any book in which the predictions the author makes are obsolete almost immediately after its date of publication. Douthat believes that video games and online pornography will obviate any revolutionary impulses in America and that the decline in crime in the 1990s was not due to the incarceration of criminal negroes but to the somatic effects of sex, drugs, and rock and roll. It’s all a Baudrillardian simulacrum to Douthat: “The reason that the Antifa kids favor masks is that an awful lot of them are playacting their revolution, and they don’t want to put their names and faces to something that’s fundamentally just a game” (p. 133).

Well, as the saying goes: Antifa kids will be Antifa kids. It’s just a game. Perhaps Douthat has read too much Baudrillard, or more likely just watched The Matrix too many times on Netflix during the COVID-19 shutdown. I doubt that the dozens of people killed by Antifa or the thousands whose homes and businesses have been destroyed by BLM rioters would agree with Douthat’s pacific assessment of the intentions of the lunatic Leftists. Could it be that the reason the Antifa “kids” wear masks is to prevent them from being apprehended for rioting, arson, and murder? That possibility doesn’t seem to have crossed Ross Douthat’s mind.

But if the Antifa “kids” get a pass from Douthat, the same cannot be said for Donald Trump or anyone to the right of Bernie Sanders. It is clear throughout the book that to Douthat the worst aspect of Western decadence is that it has allowed Donald Trump to be elected to the American presidency. Almost as bad is Douthat’s opinion of Viktor Orban. According to the author, the illiberal democracy of Orban’s Fidesz Party is just a variation of modern decadence, a decadence with a little bit of paprika added to the sauce:

How is Viktor Orban’s officially democratic but one-party-dominated Hungary all that different from the de facto one-party system that prevailed in Mexico for most of the second half of the twentieth century. . . . It’s quite normal for democratic systems to produce powerful parties that bend the rules to keep themselves in power, and nobody thinks that Mexico when it was dominated by the Institutional Revolutionary Party (PRI) represented an ideological challenge to liberal democracy. For all the sound and fury about so-called illiberal democracy under Orban or Poland’s nationalist party, Law and Justice, the same may be true of eastern Europe today. (p. 164)

For starters, the PRI made certain that Mexico, a country blessed with abundant natural resources, remains a third-world hellhole, whereas Orban’s Fidesz has led to a renaissance of Hungarian culture and an increase in the Hungarian birthrate.

One can infer from the book that the author may not be too pleased with the prospect of an increase in the number of happy, healthy little Hungarians. One gets the sense that Douthat may not be entirely comfortable in his white skin. For example, for someone who claims to be a Christian, Douthat seems to have little understanding of the faith. Douthat does not seem capable of imagining a renewal of Christianity without mass migration from Africa. This is the Cardinal Sarah deception, not unlike the Thomas Sowell deception so beloved of economists. The traditional African Catholic prelate, Robert Cardinal Sarah, is forever being paraded about by the National Review crowd as evidence in favor of unlimited African migration. Just think of all of those Negro Anglicans and Catholics who will renew the faith! Just like the natural conservatives from Mexico who will naturally vote Republican — except that they never do.

The failure of Douthat’s book, its emasculating mediocrity, is based upon the core belief that unifies all of the various facets of Western decadence: the willful refusal to make distinctions, to see differences, to acknowledge the inequalities that exist among human beings at both group and individual levels. Douthat sees no difference between Hungary and Mexico because to do so would make him unwelcome in the editorial offices of The Atlantic and The New York Times. The willful refusal to make distinctions eventually metastasizes into the inability to distinguish between good and bad or right and wrong. This is the true meaning of decadence. Ironically, the existence of Douthat’s book is the best evidence at hand that we live in a truly decadent world.