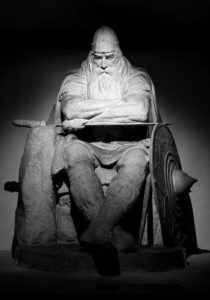 Of all the airports I have traveled through, I have probably spent the most time at Copenhagen Airport. During a recent layover there, I kept passing by a souvenir shop that displayed books about hygge, a Danish term that broadly represents “coziness, contentment, and happiness.” Whether I was visiting castles, discovering ancient burial mounds, or attending heavy metal concerts with friends, I have had many experiences in Denmark that gave me the hygge feeling. As a wanderer, dissident, and white advocate, I realize that this kind of feeling can only be experienced when white people can freely live amongst their own kind and away from non-whites. And it will take the hero in all of us to make that goal a reality.

Since my father’s family came from Denmark, I was always interested in Scandinavian history. Medieval Scandinavian history has often been a mix of history and mythology. One example is Angantyr, an 8th-century Danish king who was said to be the descendant of one of the three warriors named Angantyr in Norse mythology. When I relocated to Denmark in 2008, I got to know some heavy metal musicians who also played in a band called Angantyr. After a few rounds of Carlsberg, they offered to take me to some castles and Viking sites that were only accessible by car.

The first site we visited was the Jelling runestones. Along with a burial mound and a museum, the site displayed two runestones from the 10th century. The first runestone was raised by King Gorm in memory of his wife Thyra. King Gorm was the son of the semi-legendary King Harthacnut, who seized land and power throughout Scandinavia in the early 10th century. When Harthacnut died, Gorm took the throne. The chronicler Adam of Bremen reported that King Gorm began ruling over an extended Danish kingdom in 936. Sometime after becoming king, Gorm married Thyra. Thyra is credited for overseeing the construction of the Danevirke, a system of fortifications located around the current border between Denmark and Germany. When Thyra died, Gorm established the same burial mound and runestone for the queen that we saw at the site. Gorm died in 959. His son, Harald Bluetooth, became the king of Norway and Denmark (and was the founder of the second runestone at the site).

A few weeks later, my friends decided to take me to an ancient dolmen burial tomb. There are over 2500 dolmens, megaliths, and burial mounds throughout Denmark, mostly in the countryside and rural areas. Lucky for me, they drove me to Poskær Stenhus. Poskær Stenhus is the largest dolmen in Denmark and is estimated to be over 4,000 years old. We entered the structure and I was surprised to find the tomb area to be spacious and wide. We spent most of the evening in the field near the site, sharing stories, drinking Gammel Dansk, and listening to classic Danish metal bands. Sadly, some of the musicians from these bands died last year. Every time I drink Gammel Dansk, I think of the hygge experience I had while listening to their music near an ancient burial tomb with friends. Skål to Timi G. Hansen (Mercyful Fate), Kim Jul (Evil), and Morten Stutzer (Artillery).

The next time I saw my friends was when they invited me to one of their concerts on the Danish island of Bornholm. Located in the Baltic Sea, Bornholm has been fought over for centuries by Denmark, Sweden, and Germany. Hammershus is a fortress located on the northwestern edge of Bornholm. It is the largest medieval fortress in Scandinavia. The fortress was built in the 13th century and endured various sieges for the next 200 years. In 1521, Hammershus was taken by King Christian II of Denmark and used to imprison his political opponents. In 1658, Hammershus was briefly taken by Swedish troops until a Danish peasant rebellion, led by Jens Pedersen Kofoed, kicked out the Swedish troops and restored the island to Danish rule. By the 18th century, the fortress was abandoned. Fortunately, various preservation groups have been restoring and maintaining the fortress since the late 19th century up to the present day.

I had a great time at the concert in Rønne, the largest town on the island. I ended up spending a week in Bornholm and I got to see a lot of the windmills, rock formations, and the scenic cliffs that Bornholm is known for. Looking back, I really enjoyed walking with my friends around their neighborhood and the surrounding nature trails. On the ferry ride back to Copenhagen, I met a person from the concert who was originally from Helsingør. He suggested that I visit the famous Kronborg Castle, which was the inspiration behind the Elsinore Castle in William Shakespeare’s Hamlet.

Kronborg Castle was built by Eric of Pomerania in the 1420s and was originally called Krogen (“The Hook” in Danish). In the 16th century, King Frederick II of Denmark transformed the fortress into a Renaissance castle. A fire destroyed most of the castle in 1629, but King Christian IV of Denmark had the castle rebuilt. The castle would be damaged again in 1658 when Swedish troops captured the castle and looted it for valuables. By 1785 the castle was converted into military barracks and by 1923 it became a historic site open to the public. What really impressed me was the underground castle area, as there were various pathways and tunnels that I briefly got lost in. Before finding the stairway back to the ground floor, I stumbled on the statue of Holger Danske.

Holger Danske is a character that appears in medieval French literature as a knight who fights against the Saracens and eventually rebels against Charlemagne. During the 13th century, these French stories were translated into Old Norse and became part of the Karlamagnús saga, an Icelandic saga. In the 16th century, Christiern Pedersen translated the French prose version of Ogier le Danois into Danish. Pedersen also changed Holger’s French background and gave him Danish origins. An opera titled Holger Danske was composed by Friedrich Ludwig Æmilius Kunzen in 1789, with the libretto written by Jens Baggesen. This opera had a large impact on Danish nationalism in the following decades. Bernhard Severin Ingemann wrote an epic poem called Holger Danske in 1837 and Hans Christian Andersen created a short story with the same name in 1845.

According to Danish legend, Holger Dane traveled to Kronborg Castle after saving France from danger and has been sleeping underneath the castle ever since. He will sleep there until the day Denmark faces its greatest peril, at which time Holger Danske will awaken from his slumber and save the nation and its people. Within the last two decades, Copenhagen has seen a dramatic increase in violent crime committed by non-white immigrants. The areas that house these non-white immigrants have become no-go zones and the adjacent white neighborhoods are seeing the attacks, rapes, and murders spill into their areas. If there was ever a time for Holger Danske to rise from his slumber and save Denmark, the time is now.

Fortunately, there are real-life heroes like Holger Danske doing their part to rescue Denmark. I returned to Denmark in 2019 for the Scandza Forum in Copenhagen. This event would be known as the “Siege of Copenhagen,” where Antifa surrounded the building and attacked anyone that tried to get through (including the delivery driver trying to deliver the catered food that was ordered). Various guests and speakers were unable to get into the event. Yet there were many brave people that stood their ground and carried on with the event. I met many of these courageous people. Some have been community leaders and content creators putting their names, faces, and voices out in the open. Others have formed social groups while others have attempted to get involved in politics. Since our enemies control practically all the institutions in our society, we need a multi-tier approach to finding and implementing solutions. That is why we need different people with different skills doing different things. Just be sure that whatever action you take, the benefits and rewards outweigh the costs and risks. The risks and challenges will be different for each person, but we all have an important role in securing the existence of our people and a future for white children.

It takes a hero to speak uncomfortable truths. Yet we can all remind our friends and families that things are never reciprocal with non-white people. Non-white countries are never expected to be multi-cultural, diverse, or tolerant of white people. You never see non-whites holding protest marches when a white person gets beaten, raped, or murdered. The “golden rule” (treating others how you want to be treated) only works when everyone in your society shares your same morals and values. As difficult as it is for many people to accept, non-whites do not share our morals and values because they do not think like us, they do not act like us, and they do not identify themselves as one of us. We are white and the anti-white elites who control our societies depend on non-whites resenting us, retaliating against us, and eventually replacing us. The sooner we get white people to understand this, the easier it will be for more white people to unite as a racial group to stand up for their own lands, resources, and sovereignty. Amongst non-white people, there can be no hygge.

In the baggage-claim area of the Copenhagen Airport, they recently put up posters advertising all the neighborhoods that have become “culturally enriched.” While these posters advertise the increase in diversity and ethnic restaurants, they somehow forgot to advertise the increase in violent crimes. With a smile on my face, I appreciated how these advertisements informed me on which areas to avoid. I then thought of all the things that bring me comfort and happiness: medieval castles, heavy metal, nationalist events, and homogenous white societies.

Now that is the kind of hygge that awakens the hero in all of us.