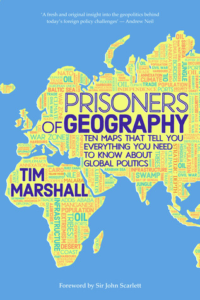 Tim Marshall
Prisoners of Geography: Ten Maps That Tell You Everything You Need to Know About Global Politics
London: Elliot and Thompson (2015)

The physical realities that underpin national and international politics are too often disregarded in both writing about history and in contemporary reporting of world affairs. Geography is clearly a fundamental part of the “why” as well as the “what.”

Ever since I was a small child, roughly from age three or four, I remember staring transfixed at any map I could get my hands on. Atlases, globes, wall charts, everything to satisfy my voracious appetite for map-reading. It’s important to not confuse the map for the territory, but a map is a story of the territory, for those who know how to read it. I would scan maps for hours on end, learning to the best of my ability the various geographical features, the names of countries, cities, and capitals. Much of it I still remember even at my embarrassingly advanced age. So, it should come as no surprise to anyone that I was positively giddy when I heard that a book about maps that explain the world exists. And indeed, Prisoners of Geography: Ten Maps That Explain Everything About The World claims that such maps exist.

The premise of the book is remarkably solid — you could even call it self-evident: the foreign policy and geopolitical decisions made by world leaders are constrained by geography, that nations, states, and leaders are in many ways prisoners of geography. For example, no matter the political system or leadership structure, a leader of Russia has an interest in exerting influence over Poland due to the geography of the European Plain, which is narrowest in Poland — therefore, control of Poland means control of the land gateway between Western Europe and Russia. A Chinese leader, irrespective of political system or leadership structure, has an interest in controlling Tibet, given that all of China’s major and life-giving rivers spring from the Tibetan plateau. And an American state, regardless of political system or leadership structure, must control the port of New Orleans and its gates to the outside world – Florida, Cuba, and the Caribbean. Only then can the world oceans communicate with the vast inland of the North American continent through the many navigable waterways of the Mississippi-Missouri watershed. And of course, dreams of a politically united Europe remain just that: dreams. Unlike North America, a map of European watersheds reveals a patchwork of medium and small riverbeds, with the notable exceptions of the Danube, Dniepr, Don, and Volga.

But aside from the great insights with regard to geography, Tim Marshall’s erstwhile effort gives us a case study of what mistakes smart and insightful people make when they are blinded to certain realities of the world. Indeed, how can the author — a British journalist and international correspondent in good standing — do something as crass as noticing the biological realities of nation and race?

A good example of the inner contradictions within the book itself resulting from race-blindness, and more importantly, blindness to racial conflict, arise when comparing and contrasting chapter 3 (which deals with the United States) and chapter 7 (which deals with India and Pakistan).

Marshall rightfully criticizes Pakistan as having no internal cohesive mechanism outside of Islam and opposition to India given that Pakistan consists of several squabbling ethnic groups. It’s dominated by and resentful of a Punjabi majority, and Marshall predicts a turbulent future for it. But he also gleefully predicts that the United States will keep on going, even as it wanes in power, completely ignoring the problem posed by the emergence of ethnic groups resentful of America’s historic people who are now on the way to becoming a minority. The crux of the argument for America’s continued wealth and power is predicated on the assumption that the port of New Orleans, connecting the Mississippi watershed to the Gulf of Mexico and the Florida peninsula — the gateway between the Gulf and the sea — will remain in American hands. But it is precisely these lands in America that are facing intense replacement migration. A majority Hispanic Florida might choose to leverage its geographic position, possibly in concert with Cuba and other Caribbean nations, and dictate terms to America’s inland, whose navigable rivers are meaningless without access to the high seas. Marshall describes the absolute necessity of the Mexican-American war and the importance of pushing the potentially hostile Mexican state far away from the port of New Orleans, but fails to see the danger that a majority-Hispanic Texas, or even Louisiana, could have on that same port. If the loyalty of the Pakistani Pashtuns to the regime in Islamabad cannot be counted on, can American Hispanics, especially Mexicans, be counted on to be loyal to the regime in Washington?

Nowhere are the epicycles explaining away racial and ethnic differences more obvious than in the section on South America. The wealth of Chile, Argentina, Uruguay, and the Brazilian states of Rio Grande do Sul and Santa Catarina is due to the Rio de la Plata and the natural harbor of Buenos Aires, and in no way due to the white majority in South America’s Southern Cone. Or could it be that European settlers had the foresight to settle these productive regions? Hmm. Either way, a good deal of rationalization could be done away with if only the element of race were to be taken into account. Sadly, what could be an excellent exploration of African geography in chapter 5 descends into similar epicycles.

What can we, as Dissident Rightists and white nationalists, garner from this book? First of all, let’s look at the situation in America. Whites on the North American continent have leveraged the interconnectedness of its waterways to great effect and wealth, but, as mentioned before, the economic utility of the Mississippi-Missouri watershed depends on control of the gates of New Orleans and Florida. Many people assume that the Midwest, possibly the Pacific Northwest, and parts of inland Canada could become a homeland for whites on the North American continent. However, without control of New Orleans and Florida, or at the very least parts of the East Coast, such a country would have no means of entering the Atlantic and coordinating with Europe — preventing the cross-Atlantic cooperation that we have hitherto had for better or worse. Absent the Rio Grande, there are precious few natural barriers between the proposed Midwestern-Pacific Northwestern white homeland and Mexico — opening up the state to hostile invasion and infiltration. All of these factors will dictate the extent and borders of the proposed new homeland. It is important to remember that the USA and Canada took the shapes they took due to geographic expedience and constraints.

Second, we must look to Europe and her defenses. I’ve already written extensively about the possibility of a European alliance to defend the continent’s borders. Geography works to our advantage here — Europe is easily defensible from the south and south-east, and extra layers of defense can be added by exerting influence on the Mediterranean’s south and Eastern shores. The Atlantic to the West seems to be an unlikely route of attack, as does the Arctic to the north (although, as chapter 10 points out, the Arctic is now very much in play as icebreaker technology advances and the polar ice cap recedes). This leaves the East and our old friends of Velikaya Rus, whose loyalty to a potential alliance of European nations and potential imperial ambitions on Europe are something we have yet to determine. Poland will once again take center stage in world history, as it is there that the European plain is narrowest.

Thinking about maps and geography is good for its own sake, too. Obviously, it is fun, but more importantly, we who would be thinkers and rulers must of necessity take into account the facts on the ground; including the literal ground, the climate, the populations, the tides and ebbs and flows of rivers, the mountains, the woods, the deserts, and the seas. The land speaks.

But maps and lands do not tell the whole story. History and the future are tales not only of geography, but also of biology. Tim Marshall is fond of pointing out that geography is destiny, that nations and leaders are prisoners of geography. Our movement’s most emblematic maxim is that demographics are destiny. But a view of one without the other is incomplete. Just as a man needs two eyes to see properly, to perceive depth and nuance, so too does a geopolitical thinker need both geography and biology.

In any case, I warmly recommend everyone imbibe this excellent tome. Unfortunate though his blind spots may be, Marshall has much to teach us.

« Foreword to Graduate School with Heidegger by an Anonymous Heidegger Scholar