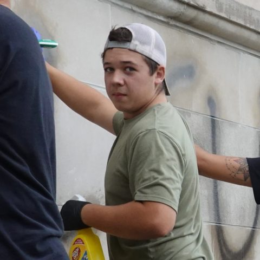 In the days before the shooting, BLM/Antifa rioters set fire to several local businesses, homes, and more than 50 cars and municipal vehicles in Kenosha. The destruction caused by the “mostly peaceful” riots has taken a toll on the town. On Wednesday, the Kenosha County Board requested the deployment of National Guard troops: “Our county is under attack. Our businesses are under attack. Our homes are under attack. Our local law enforcement agencies need additional support to help bring civility back to our community.”

Rittenhouse shot three people, two of them fatally. Mainstream accounts of the incident give the impression that he walked up to rioters and randomly began shooting at them unprovoked. In each case, however, he did not shoot until they attacked him.

As Rittenhouse was running from his crazed pursuers, he tripped and fell in the middle of the street, at which point they shouted “Get his a**!” and charged at him. One man, 26-year old Anthony Huber, hit him on the head with a skateboard and tried to seize his gun. Rittenhouse shot him while lying on his back. Like Rosenbaum, Huber had a criminal record: in 2012, he was arrested on charges of domestic violence, strangulation and suffocation, use of a dangerous weapon, and false imprisonment. (Despite this, he is being hailed as a “hero” and a “peaceful person.” You can’t make this up.)

As Greg Johnson commented, the only thing Kyle Rittenhouse did wrong was to think it was worth risking his life to confront the rioters. This is not our fight, and engaging in conflicts with BLM/Antifa merely gives our enemies ammunition. Our best bet is to remain above the fray for now and swoop down when the time is right.

« In Defense of Kyle Rittenhouse