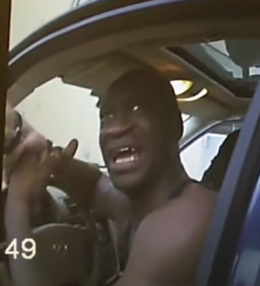 The cries for justice over the deaths of Trayvon Martin and Michael Brown were hoaxes. Both men were criminals who died because they were dumb enough to assault men with guns. The same is true of Ahmaud Arbery.

Jussie Smollet and Bubba Wallace were hoaxers painting themselves as victims of hate crimes. But fake hate crimes are real hate crimes against whites. Both men’s careers should be canceled, and they should end up in jail for their crimes.

There are more than forty million black people in America. Can’t Black Lives Matter find at least one actual victim of racism?

Now, with the leak of the police body-camera footage of the arrest of George Floyd, we have confirmation of what sensible people suspected all along: George Floyd was not a victim of police brutality or injustice.

The story we had been sold was that, for no good reason, Floyd was thrown to the ground by a brutal cop, Derek Chauvin, who then put his knee on Floyd’s neck for nearly nine minutes while Floyd pled that he could not breathe, choking him to death.

Also based on this story, America has been convulsed by more than two months of race riots, which have killed dozens, injured countless others, and destroyed billions of dollars in property and countless livelihoods.

There were many facts that did not fit this story, however.

George Floyd’s autopsy revealed that he wasn’t suffocated. Instead, he died of heart failure. He was suffering from heart disease and COVID-19. He also had the opioid fentanyl in his system as well as methamphetamine. The medical examiner said these drugs contributed to this death. (He also had traces of cannabis.)

Beyond that, Floyd was apprehended before he could drive off, clearly intoxicated, after trying to pass a counterfeit bill. Should the police have allowed him to just drive away? Obviously not. They had to do something to get Floyd out of his car and away from the public so he could not endanger himself or others.

The person who called the police reported that Floyd was acting strangely, which in all likelihood meant that he was intoxicated or mentally ill, thus not to be trifled with. 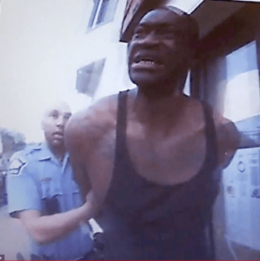 It turns out that Floyd had a long criminal record, including an armed robbery in which held a gun to the stomach of a pregnant woman. In short, George Floyd was a real piece of shit.

Moreover, putting a knee on an uncooperative suspect’s neck is an approved police control technique, so how could Chauvin be indicted for murder?

But now we know that it was all a fraud. What does the police body camera footage reveal?

First of all, it reveals that George Floyd was dishonest, uncooperative, and acted deranged and scary.

Second, the video reveals that the police dealt with Floyd with a level of patience and professionalism that I certainly could not have mustered. One cannot say that Chauvin lost his patience or lashed out at Floyd.

Ask yourself, dear reader, would you have been able to maintain your cool in the same situation? I know I would have snapped. I was thinking “Couldn’t we just arm police with tranquilizer darts to bring these beasts down?” This video gives me nothing but respect for the police who have to deal day in and day out with deranged criminals like George Floyd.

Was George Floyd a victim of injustice? No, he died because (1) he committed a crime, (2) refused to comply with the police, and (3) was so high on drugs that he was not up to the rigors of being forcibly arrested. If he hadn’t done any of those things, he — and a lot of other people — would still be alive today. George Floyd’s death was entirely his fault. It wasn’t murder. It was the predictable result of Floyd’s own bad character and bad choices. It was his just desserts.

Now we have to secure justice for Derek Chauvin and his fellow officers, as well as for the millions of Americans whose lives have been turned upside down by this massive hoax perpetrated by the government of Minneapolis, the State of Minnesota, Black Lives Matter, the mainstream media, and the far Left — aided and abetted by the craven eunuchs of the mainstream Right.

If I were Donald Trump, I would invoke the Insurrection Act, then spend the next few weeks arresting the leaders of BLM and antifa, as well as their collaborators in state and municipal governments, for the crimes they have already committed. Once the Leftist beast is decapitated, I would pardon Derek Chauvin and his fellow officers. Then I’d grab some popcorn.

“But we could never do that! Blacks would burn the country down!”

If that is your initial reaction, I want you to reflect on it. Derek Chauvin, his fellow officers, and the whole planet have been victimized by a blatant hoax. If we can’t do the right thing and call a stop to it, then aren’t we admitting that we have to choose between having justice and having black people in America? Well I choose justice. Which is reason number one-hundred-million-and-one why I believe that blacks and whites in America need to go our separate ways. We need a racial divorce.

« The Prison Plays of Aleksandr Solzhenitsyn