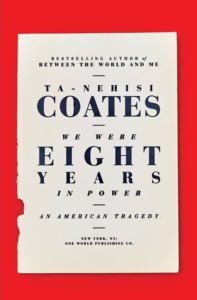 Ta-Nehisi Coates
We Were Eight Years in Power: An American Tragedy
New York: One World Publishing, 2017

I expected to hate We Were Eight Years in Power. After all, the book is written by a guy with one of those, dare I say, unusual black names — Ta-Nehisi — and I’m a total white nationalist. But I ended up finding the book both interesting and wise. Ta-Nehisi Coates well expresses the pain of being black in America. Since Coates’ pain is driving local policy of removing white cultural items from coast to coast, one better take the guy seriously.

The book isn’t about the Obama presidency and its impact on America. Instead, it is a study of Coates’ pain of being black in America next to what Obama was doing at the time in a series of long-form essays. I’ve got a rough overview of the Obama administration below.

Coates shows that Michelle Obama’s family were so deeply ensconced in Chicago’s South Side sub-Saharan political elite that they rarely interacted with the wider white world. They were essentially socially conservative Booker T. Washington people that lived in an all-black ecosystem. He argues that when Michelle Obama said she didn’t really discover her blackness until she got to Princeton, it was because that was the first time she was out of the African-American cocoon of the South Side. She wasn’t radicalized by Leftist beatniks at the university in the way many whites interpreted her statement to mean.

Coates discusses the merits and shortcomings of the Booker T. Washington worldview in depth. He argues that Bill Cosby’s “Pound Cake Speech” (i.e. encouraging blacks to not sag their pants and speak clearly) was well received by the socially conservative black community, but hated by the politically active Leftist elite. However, Coates was frustrated by Obama’s use of similar themes at a Morehouse commencement address.

I understand his frustration. All young men need some version of a tough love “Pound Cake” speech. (Don’t be a jerk, dress well, work hard, etc.), but at some point, one is doing all the right tough love stuff, and one must get advice on how to deal with more advanced problems — and a college commencement address is just the time to do that. I got my definitive tough-love experience(s) around age 14, and then had further tough love experiences until I was 19 working on the high prairie of North America. Then I discovered around age 23 that my next problem was deciding when to fire someone, and it only got more complex from there.

In other words, Coates is correct. It might have been wiser for Obama to give a speech on a larger ethical principle at Morehouse than “pull your pants up.”

Coates is also interested in the Civil War. He approaches the conflict from the viewpoint of a descendant of black slaves. Coates downplays the interpretation of the event as a failure to compromise, or some kind of big tragedy, that is put forward in historical works like Ken Burns’s Civil War [1]. Instead, he views the conflict as primarily the result of slavery. From his viewpoint, blacks should be as engaged with the history of the Civil War as whites. They were the war’s ultimate winners.

I agree with this assessment. The Civil War was primarily caused by slavery — or better said — how slavery would expand, and Africans were the winners. All the other problems between the North and South were secondary. What made slavery so explosive is that Southerners understood African limitations while Northern abolitionists did not. I think one point Coates brings up is worth repeating:

The celebrated Civil War historian Bruce Catton. . . refers to the war as “a consuming tragedy so costly that generations would pass before people could begin to say whether what it had bought was worth the price.” All of those “people” are white (p. 77).

I don’t believe what was gained by the Civil War will ever be worth the price. While there is a real pain of being black in America, there is the pain of blacks being in America upon everyone else, and the Civil War was part of that pain and the war made the condition worse.

There is a great deal of discussion about mass incarceration. Coates believes that mass incarceration is due to simple racism. He argues that the crime wave of the 1960s through 1990s was global, to include a crime wave in the Nordic countries. There might have been a rise and fall in crime in Sweden at the time, but Swedes weren’t committing crimes at the scope and scale of blacks. Stockholm also didn’t go to rack and ruin like every city in the path of the black migration. Denmark didn’t have a crack epidemic or drive-by shootings. If you wish to have a society with the fraud of “civil rights,” then you must have big prisons for blacks.

There is a long essay about reparations for slavery. I won’t go into it, but I’ll mention that the problems arising from such a payout are easy to see, and those problems would likely play out like the bloody end of the 1919 Versailles Treaty or the Baron’s Revolt against King John in England.

Coates believes blacks are plundered by whites in America. This might have been true when slavery was around, but it is not true since slavery’s end. Blacks are a financial burden for whites.

As mentioned above, the book isn’t about Obama as much as Coates expressing the pain of being black in America. While the book has a great deal of wisdom and insight, and I enjoyed reading what Coates had to say, I must indulge in a cheap shot mentioned by many others: All black intellectual endeavor ends up being about nothing but blackness itself, and this book is no different.

Meanwhile, Obama was in power for eight years and his presidency should be discussed.

Obama became president due to factors outside himself and within himself. Outside himself, Obama had the following advantages:

Within himself, Obama was a non-white version of a hero in a James A. Michener novel, but he came from the Pacific Islands to North America, rather than the opposite way Michener described in his books. Obama was mixed-race, lived in the Pacific, and went to a foreign people (South Side Chicago blacks) and intermarried with them, and then went to rule with liberal 1950s-style “civil rights” values.

Obama’s story was what many Americans craved. He was a blank screen for blacks and whites to project their fantasies upon. Additionally, throughout his career, people believed in Obama and saw something presidential in him.

Obama’s central accomplishment is being a better custodian of the United States than his predecessor. Otherwise, much of what he did was just poke along. However, he exacerbated divisions in the United States that are already unbridgeable and will likely lead to great instability and bloodshed in the future.

Obama’s negatives first became noticeable when he commented upon the arrest of Professor Henry Louis “Skip” Gates in 2009. Professor Gates was returning from vacation and had locked himself out of his house. He was spotted by a concerned citizen breaking into the property. The police were called, and Gates was arrested after making a scene.

While blacks (as a group) felt the police were in the wrong in that case, the affair really showed a lack of judgment on both Obama’s and Gates’ parts. Gates was a privileged, bookish professor who could have easily explained the situation to the beat cop and ended the problem in a minute. Obama’s comment on a local police matter made the incident a national racial firestorm.

Then Obama and his coalition — the media, black community organizers, et al — cynically made martyrs of two low-scale sub-Saharan criminals to turn out his base during election years. In 2012, the coalition’s hyping of Trayvon Martin helped get Obama re-elected, although the Republican challenger Mitt Romney had many, many, many negatives. In 2014, hyping the Michael Brown case eventually morphed into the Black Lives Matter movement in 2016. Black Lives Matter has since turned into a vast semi-terrorist network and left a trail of destruction wherever it’s been.

Coates is highly critical of the media’s handling of the Trayvon Martin affair in this book. His remarks on it are really wise and introspective and I felt his frustration. He’s a good writer.

Then there was the “Clock Boy” crisis. In 2015, Ahmed Mohamed, a Sudanese Muslim immigrant, was arrested for having what teachers thought was a bomb. Obama and his allies in the media turned the issue into a “teachable moment” on “Islamophobia.” However, it was discovered that Clock Boy had dissembled a clock to make it look like a bomb and was playing a carefully constructed prank.

I believe that Obama’s handling of the “Clock Boy” incident was a demonstration of a lack of judgment bigger than the Gates incident earlier. It is a well-known and standard policy for all government agencies to take bomb threats seriously. Furthermore, it was universally known that Islamic people have a propensity to bomb others. Obama’s handling of the matter signaled to actual Muslim terrorists an official stupidity. It turned out to be a green light for terror. Islamic terrorists plagued the United States and Europe thereafter until the new administration enacted a Muslim Travel Ban.

Obama never truly understood that nation that he ruled.

Obama did a passable job winding down the war in Iraq and he sent his elite sailors to slay Osama bin Laden in an event I still find glorious. But in other places, his foreign policy also poked along with no benefit to anybody.

In 2011, a civil war broke out in Syria. The cause of that conflict is beyond the scope of this article. The problem for the Americas was that Obama, acting in concert with his out-of-control and ambitious Secretary of State Hillary Clinton, Israel-first Jews, and evil warmongers such as Senator John McCain, supported “moderate Syrian rebels.”

It quickly became clear that the “moderates” were not so different from the fanatics. The definitive history of this episode has not been written, and quite possibly will never be written, but it is not unreasonable to suppose that supporting a faction in the Syrian Civil War was done in part to secure Israel, and that support led to great evils such as the rise of the Islamic State. Obama also supported the overthrow of the Libyan dictator Gaddafi, which set off a chain of events that ended similarly poorly.

Obama also poured money into Ukraine to stoke a war there. As a result, Ukraine lost the territory that held a Russian-speaking population, including the vital Crimean Peninsula. I cannot explain or understand why Obama got involved in this region of the world other than to say he was unable to resist the pleadings of anti-Russian ethnonationalist Jews in the Democratic Party.

Suffice to say, American whites have responded to Obama’s eight years of weeping Negritude and crying deviants by electing Donald Trump as President, but the race problem remains. We have a choice. Build the white ethnostate, in part by encouraging blacks to follow the vision of Marcus Garvey, or we can submit to the endless emotional blackmail of the pain of being black in America.