Bright Eyes’ Down in the Weeds, Where the World Once Was 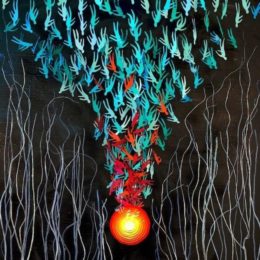 Believe it or not, there was once a time in the now-enviable 2000s in which Midwestern indie bands were considered the epitome of cool. If you wore plaid shirts (sometimes, with a t-shirt over said shirt), could play passable guitar, and had a just-so-slightly off-kilter voice with which you could sing about outsiderdom and ennui, then you had a one-way ticket to a record deal.

At once, the explosion of pop-punk, grassy acoustic indie, and other sweater-clad rockers represented an America at the peak of decadence. What could be more postmodern than handing down centuries of sonic research, artistic innovation, and instrumental precision to a bunch of sullen 20-year-olds and then telling them to whine about their hometown? Yet despite that, the populist undercurrents of this moment in pop culture are impossible to ignore. Bands like The Shins, Sunny Day Real Estate, Cap’n Jazz, and the topical Bright Eyes filled the airwaves with music that spoke more directly to the listlessness of the nation’s more forgotten folks, the flyover types who were just as maladroit as everyone else — except they didn’t live in California.

Bright Eyes is of special note for their folk influences. Conor Oberst, the band’s frontman, signed the band’s records with vibrato-infused lamentations that ran the gamut from anti-hero biographies, plane crashes, and loosely-constructed political critiques. The band fit their time and place very well, incorporating the musical forms of old that could be found in their hometowns — more grievances than just cornfield confusion. The band’s broadly anti-Bush stance in the 2000s was also not limited to pandering that was trending on MTV and other major outlets. It’s not often you get a song the implicitly suggests you burn your Social Security card.

In short, Bright Eyes were folky in the true sense of the word, a product wholly of their era and area. That energy can synthesize into truly great works of art for the people that they’re meant for, but this also has an unfortunate side effect. Once a group like this hits it big in the mainstream, their message can become confused and muddled, and they risk adopting subcultural cues and notes that they don’t truly understand or perhaps even believe in. Matters can be made even worse when their musical forms don’t follow this shift in rhetoric, becoming trite and shallow for their pseudo-nostalgia and inappropriateness for their subject matter.

That’s exactly what has happened to Bright Eyes, and it is made obvious by their new record, Down in the Weeds, Where the World Once Was, an album that followed a 9-year hiatus. It is chock-full of every imaginable early-to-mid 2000s musical archetype, handled not with a self-aware irony or nod to nostalgia, but stripped of its significance. The most on-the-nose example I can think of is the forward-facing Spanish introduction to the album on “Pageturners Rag,” smacking immediately of Queens of the Stone Age’s post-”Knows” intro to “Go with the Flow” without any of the prerequisite sardonics. (Is Los Angeles, where Oberst maintains a second home, getting to him?)

Where Oberst’s political messaging was once subdued and cloaked in a fitting post-industrial worldview, he now sings of the usual dead horses, like climate change, police brutality, and earthquakes (“Look now as the crumbling 405 falls down / When the big one hits“) on “Mariana Trench” and that strange, unintegrated wistfulness for a dying old American town on “One and Done.” It is difficult to consider the band “outsiders” in the useful sense of the term, given their now extremely comfortable positions in life, so to hear of Oberst wailing about the loss of Americana despite his rather predictable departure to the Golden Coast feels a bit tone-deaf, if not an outright betrayal, considering the music that propelled the band to initial success among their jacket-clad audiences.

Musically speaking, the album does sound very much like Bright Eyes, but a modern facsimile of Bright Eyes as it was in the 2000s, printed on paper stained by the ink of 2020. It’s criticism enough to accuse the band of recycling their old forms, which is what they did, but even more damning is the fact that they’ve swallowed up quite a bit of modern influences that reflect none of their original project’s energy. I found myself asking why I was getting Father John Misty vibes from this album. The answer is simple: you can sell records to mopey millennials if they sound like everything else but are dressed up in throwback packaging.

Oberst and his band members have also grown older since they first began making music. Artists aging can be a double-edged sword, with some bringing greater maturity and experience to their projects, and others simply losing their mojo and deciding to beat dead horses for the royalties. Bright Eyes, in contrast, seems to have followed a path far less intriguing than either of the aforementioned, opting to pretend they still have the same youthful energy of rebellion and sonder in their hearts as they did in their youth — except they seem to have sublimated this romantic ideal into the woes and observations of today’s “youth,” preoccupied as they are with the things they see on Twitter. It is a bit off-putting to hear a man in his 40s spin convoluted metaphors out of the things that give today’s teenagers anxiety, like interpersonal angst or whatever is going on in China. Oberst and company have grown older, and are consequently experiencing things that come with this age, like death and reconciliation, but they seem stuck in the distinctly American pop culture myth of eternal youth.

Weeds is part of a larger trend in implicitly white music, the germination of which can be observed in the early part of the 2010s. The albums that receive the most jubilation from the press and the most studio dedication tend either to be hip-hop or dance-influenced records, reflecting the changing tastes of a changing demographic. There are, of course, still hipsters, and consequently a demand for albums to sell to hipsters when they are done pretending to like rap music. Bands like Bright Eyes meet this demand, bringing their name recognition and warm-and-fuzzy feelings of the better, less-complicated 2000s to the table, only to serve up more of the same.

It’s time to hang up the flannel.

» The One Perversion That Can’t Be Normalized