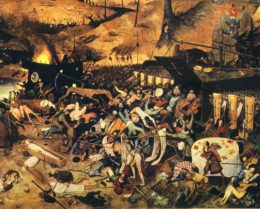 It feels like a slap in the face when you think you are living in interesting times, but then you realize, no. No, you were not. Those times, or really, our memories of those times which slowly evaporate even as they cling more tightly to the fear centers and emotion hubs of our minds, were not terribly interesting at all, were they? It hurts to think that we did not know what interesting was — back in those times.

And how we long for them now.

Those dull, insipid, placid times feel so long ago, don’t they? Two months. It’s been almost two months since the death of black felon and affirmative action martyr George Floyd triggered the death spasm of the United States. It feels like an entire generation ago. It’s as if future historians will point to this event, like that moment in 1914 when Archduke Franz Ferdinand of Austria-Hungary was assassinated, and say, “Here. Here is where history begins to turn on its head and nothing would ever be the same again.” This is a greater historical shift than 9/11. After 9/11, we tore ourselves apart trying to deal with an enemy from without. Today, the enemy is within, and there is no dealing with it.

We all knew it was coming. But at least on May 24th, 2020 BFE (the last day of the Before-Floyd Era) we had some faith in our institutions. They hadn’t eroded that far, at least not yet. Sure, there were signs that things were going south — all the Orwellian censorship and de-platforming, the bogus three-year-long impeachment of President Trump, the mainstream media’s blind anti-Trump rage, and the hysteria surrounding COVID-19, just to name a few. But in the BFE, we had at least some faith that our leaders would not capitulate entirely to the Bolshevik mob. We had at least some faith that America as we knew it would keep chugging along. After all, habit and momentum must count for something.

And now that we are in Year 1 AFE (After-Floyd Era), we must all realize that the United States has been irrevocably damaged, like the Titanic moments after it had been sliced open by the iceberg. Yes, it will stay afloat for a while, but it’s only a matter of time before it sinks and takes a tragically large number of people down with it. A coalition of radical Leftists and racially-vindictive non-whites have hijacked the Democratic Party, burned and looted our cities, torn down our statues, and vowed to destroy the current system and replace it with a racially-charged form of communism. These people are well-funded, organized, violent, and ruthless. Meanwhile, Hollywood, academia, and the mainstream media — the traditional enemies of the Right — root them on.

If things continue unchecked, there will be war. Either Trump wins reelection in November, and they attack, or Trump doesn’t win in November, and they attack. And they won’t stop. The battle lines will be deeper than Democrat vs. Republican or Blue State vs. Red State. It will be essentially non-whites vs. whites. Yes, of course, there will be many whites on the non-white side and a few non-whites on the white side. I imagine that most neutral non-whites would rather hunker down in their own neighborhoods or flee the country entirely before taking sides in what will likely be a deadly affair. Maybe Mexican forces will start probing into Arizona and southern California once the shooting starts. Who knows?

In either case, this isn’t about blowing up Fort Sumter or invading Poland. This isn’t about enslaving blacks or oppressing Jews. This is ultimately about white people offending their enemies’ sensibilities by living and breathing and having white babies. There will be no ostensible cause to this coming conflict less ridiculous than the death in police custody of a violent black felon who was high on meth and suffered from coronary artery disease, hypertension, and COVID-19. No, in the AFE, the war is coming to you whether you like it or not. Your white skin, which used to be a badge of honor, is now quickly becoming a target. History has reached its apogee and is now spinning its way through its inevitable 180-degree turn.

So, what should a white person do? First on the list is an attitude adjustment, and second, a lifestyle change. We are fighting the clock as well as our enemies. We need to move, and here are some suggestions which demonstrate the stark difference between the Before- and After-Floyd Eras:

In the BFE, we shopped for firearms mostly for hunting or for self- or home defense. In the AFE, we should be thinking about neighborhood defense or town defense. Or maybe even — perish forbid — various forms of offense.

In the BFE, we saved money mostly for our retirement or legacy or for our own pleasure and comfort. In the AFE, we should be thinking about ways we can invest or convert that money into forms that can actually survive a civil war.

In the BFE, we went food shopping to shore up the week’s supply of breakfasts, lunches, dinners, snacks, and desserts. In the AFE, should be looking at expiration dates on canned goods and beef jerky, and making room in our basements and pantries for durable foodstuffs that we hope we will never need to consume.

In the BFE, we kept in contact with old friends in distant parts of the country mostly for nostalgia or amusement. In the AFE, we should be considering moving and forming real-life communities with these people in case our enemies make life intolerable where we are now.

In the BFE, we encouraged our children to move wherever they needed to, including faraway places, in order to pursue their careers. In the AFE, we should be telling our children to stay close to home as much as possible, careers be damned.

In the BFE, we attended sporting events and purchased merchandise and paraphernalia of our favorite universities and sportsball teams in order express allegiance to our city, region, or school. In the AFE, we should now reconsider supporting organizations that practice anti-white racism no matter where they are.

In the BFE, we worked out because we wanted to have our gainz and look good in a mirror. In the AFE, we should be working out because that extra few pounds of muscle mass just might come in handy in a brawl.

In the BFE, we went running because we wanted to be trim and fit or because we enjoyed the adrenalin rush. In the AFE, we should be thinking about being able to outrun the mob, or being able to chase someone down if necessary.

In the BFE, we considered camping a purely recreational activity. In the AFE, not so much.

In the BFE, considerations such as price, perks, style, and reliability went into our automobile purchases. In the AFE, a vehicle’s off-road capability and gas mileage should factor into it a lot more.

In the BFE, we often read books for pleasure. In the AFE, we should consider reading books for war: survival manuals, basic military tactics, firearms technology, military history and memoirs, apocalyptic scenarios, outdoorsmanship, white identity. That kind of thing. For those just starting out, one can do a lot worse than Lucifer’s Hammer by Larry Niven and Jerry Pournelle.

In the BFE, we were on social media. In the AFE, we should consider dropping social media and electronic communication as much as possible, and instead returning to face-to-face, telephone, or even letter writing for our communication.

In the BFE, we could openly support unfashionable causes such as Blue Lives Matter or All Lives Matter without fear of anything more than being unfriended by our hipster relatives and friends on Facebook. In the AFE, taking the same stands now brings the added concerns of losing one’s career or having one’s home or business burned to the ground.

In the BFE, we often bit our tongues in the presence of family and friends whenever the taboo topic of race came up. In the AFE, we should consider running our mouths a lot more about race. In the AFE, every riot, wrecked statue, torched building, and racial insult amounts to a fuck that a white person should no longer care to give. And the overall supply of fucks out there is dwindling fast.

In the final analysis, the AFE is reintroducing whites to a fundamental law of life: that we must fight to survive. Not only do we have to fight to achieve what we have, but we must also fight for the right to keep it. These eternal truths were not on the minds of most of us during the final years of the relatively uninteresting Before-Floyd Era.

But now that we are in Year 1 of the After-Floyd Era, things are going to get very interesting very fast — whether we like it or not.