The Life of the Wanderer 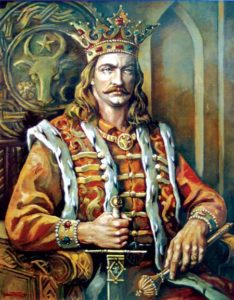 Some might consider me a wanderer. I have spent most of my adult life living and working in various US states and European countries. Since the spread of COVD-19 this year, travel restrictions have forced me to stay in the US longer than originally planned. I have spent a lot of time these last few months reminiscing on my travels and adventures. For some reason, I keep thinking about my adventures in Moldova. Reflecting on my time there has given me insight on myself, my life, and my goals as a white nationalist.

Heavy metal sparked my interest in the languages, history, and cultures of Eastern Europe. While I started listening to Scandinavian metal bands, the black metal bands from Eastern Europe caught my interest with lyrics of Carpathian landscapes, medieval castles, and ancient folklore. I met a lot of metalheads from Eastern Europe when I lived in Germany. They always recommended places to visit, castles to explore, and local foods to try. When I had the time off from work, I made a goal of visiting all the countries in Eastern Europe (except for Kosovo and Albania, for safety reasons). Near the end of 2018, the only Eastern European country I had yet to visit was Moldova. After doing some research and planning, I reserved an apartment in downtown Chisinau and booked a local tour guide to take me to a few historic sites.

I arrived in Chisinau the last two weeks of December. Since Moldova is a majority Christian-Orthodox nation, they start celebrating Christmas on December 25th until their official Christmas day on January 7th. Every night I got to walk around the downtown area while it was decorated with Christmas lights and ornaments. I also went to the largest Christmas market to drink mulled wine and eat zeama, mamaliga, and placinta. Across from the Christmas market was a large park with a statue of Stephen the Great.

Stephen III of Moldovia was born in 1433 as the son of Moldavian Prince Bogdan II. When Bogdan was assassinated by his brother, Peter III Aaron, Stephen escaped to Hungary. With the support of Wallachian voivode Vlad Tepes, Stephen returned to Moldavia to take the throne in 1457. He spent much of his reign defending the principality of Moldavia from foreign invaders and political rivals.

Stephen attacked an invading Ottoman army in 1462 and defeated the same army two years later at Chilia (modern-day Kiliya, Ukraine). When the King of Hungary Matthias Corvinus invaded Moldavia in 1467, Stephen defeated him at the Battle of Baia. Peter III Aaron also tried to attack Stephen but was defeated and executed. It was during this time that Stephen started building fortresses along the Moldavian territories. One such structure was a fortress in Tighina.

As the Ottoman Empire launched campaigns against Wallachia, Ottoman armies also invaded Moldavia. It was during these invasions that Stephen defeated a large Ottoman army at the Battle of Vaslui in 1475. It was from this victory that Pope Sixtus IV gave him the title “Champion of Christ.” In 1476, Ottoman Sultan Mehmed II attacked Stephen and his army at the Battle of Valea Alba. Stephen had to retreat due to low provisions and a plague outbreak. The Ottomans then expanded into the area and captured Chilia and other Moldavian territories in 1484.

The King of Poland John I Albert decided to use this period to gain political control of the area by claiming Moldavia for his younger brother Sigismund. Albert then attacked Stephen in 1497, but was defeated by Stephen and his Hungarian allies at the Battle of the Cosmin Forest. During his last years, Stephen co-ruled with his son Bogdan III. Stephen passed away in 1504 and was given the title “Stephen the Great” soon after his death. Stephen the Great has become a national hero to Moldova and some of the fortresses and monasteries he established are still around today.

As I sat down to eat in the Christmas market each evening, locals sitting next to me would often say hello and start a conversation with me. I mentioned my interest with Stephen the Great and how I passed his statue on the way to the market. Everyone seemed eager to describe what Stephen the Great meant to Moldova and to themselves. To the people I spoke with, Stephen the Great represented the Moldovan spirit and their struggle for independence.

Most of modern-day Moldova was part of the Principality of Moldavia from the 14th century to 1812, when the Russian Empire took control after the Russo-Turkish war. The area then became known as Bessarabia. After a brief unification with Romania in 1856, Bessarabia fell under Russian rule again in 1878. During the 1917 Russian Revolution, Bessarabia proclaimed itself the Moldavian Democratic Republic. They declared independence the next year, but were later integrated into Romania. Due to the Molotov-Ribbentrop Pact of 1940, Romania ceded Moldova to the Soviet Union. This led to the formation of the Moldavian Soviet Socialist Republic (MSSR). During the dissolution of the Soviet Union, the MSSR declared independence and became an independent Moldova once again.

I booked a local tour guide to take me to some historical castles and monasteries outside of the Chisinau region. I tried to find and older tour guide that could talk about their personal experiences during the communist period. I found a middle-aged woman to drive me to the Old Orhei monastery. She brought her elderly mother along and they both told me about their lives under communist rule. After the tour, they invited me to their home for a traditional dinner and plenty of Moldovan wine. After dinner and a few glasses of wine, the woman offered to take me on a tour of Tiraspol, Transnistria, and the Bender Fortress.

Transnistria (also known as Pridnestrovia) can be considered an autonomous area within Moldova. Although still recognized by the international community as part of Moldova, the Moldovan government describes Transnistria as an autonomous territorial unit with special legal status. After the fall of the Soviet Union, tensions between Moldova and the Transnistrian territory resulted in a military conflict known as the Transnistrian War. The conflict lasted a few months from March to July of 1992, when a ceasefire agreement was reached between Russia, Moldova, and Transnistria. Despite some unresolved issues of the agreement, Transnistria has its own government, military, police, and flag (the only flag in the world that still displays the socialist hammer and sickle).

After checking through passport control and answering a few questions (in Russian), I was in Tiraspol, Transnistria with my tour guide. The first few stops were at the war memorial and cemetery. Seeing all the hammer and sickles made me feel like I had traveled back in time to the Soviet period. Nevertheless, there were plenty of Christmas decorations throughout the main boulevard and downtown area. We walked around various markets, parks, and government buildings.

After exploring Tiraspol, my guide drove me to the Bender Fortress. This was the site of the original fortress that Stephen the Great built in Tighina during his campaigns against the Ottoman Empire. In 1538 Ottoman sultan Suleiman I conquered the area and changed the town’s name to Bender. For the next three centuries, the fortress went back and forth between Ottoman and Moldovan control. The fortress was then besieged three times by the Russians during the Russo-Turkish wars. It had recently been renovated and it was one of the highlights of my trip.

On my last evening in Moldova, a young mother with her son and pug sat next to me. I told her that I had a pug that passed away the year before. She told me about herself and her thoughts about Moldova. She explained that while her family was poor, she was happy to live close to her family and friends. Being around her family and friends made her feel at home in Moldova. She asked me if I missed my family, friends, and home. I told her that while I missed my dog the most, I would continue to travel until I found my own friends, family, and home. After sharing the last pieces of placinta with her pug, I wished them a happy new year and went back to my apartment to prepare for my flight the next morning.

Moldova is one of the poorest countries in Europe. Yet despite their poverty and low GDP, they have something that the richest countries in Europe cannot buy. They have an ethnically homogenous nation. They have a shared history, religion, and culture. As poor and impoverished as the people of Moldova are, I doubt they have to worry about accusations of “systemic racism.” I doubt their schools, media, and corporations are telling them that “Ottoman lives matter.”

Within the past month, terrorist groups like Antifa and BLM have been allowed to threaten, intimidate, and commit violence while having support from corporations, the media, and our own politicians. Our governments no longer represent us, the police no longer protect us, and whatever laws or rights we had in the past seem to no longer apply to us. Yet when we as white people defend ourselves, the police, governments, and court systems work against us.

I have been a wanderer for most of my adult life. I have been on an amazing journey filled with concerts, medieval castles, and language learning. But I never had an overall destination in mind. When I think about the young Moldovan woman with her son and pug, I am reminded of why I keep wandering. I travel to conferences and events to make friends and contacts with other nationalists in these spheres. I move around to help our people rebuild their communities. I produce content to help our people stand up for their land, resources, and sovereignty. We all have different talents and skills, yet we all have the same goal to secure the existence of our people and a future for white children. I will continue to wander until all white men can safely live in their own communities with a wife, child, and a dog. Where white lives matter.

I will continue to wander until all white people have a homeland of their own. That is my goal and destination. Until I reach that destination, I plan on enjoying the journey there for as long as possible. Such is the life of the wanderer.

« Is Xenophilia a Mental Illness?