Sitting Out the China Cold War 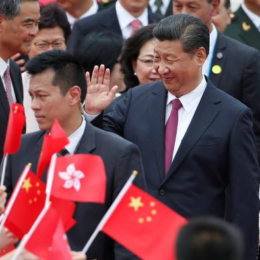 The United Kingdom will now potentially allow millions of Hong Kongers to become British citizens. The new policy was made in response to China’s new security law that curbs Hong Kong’s autonomy. Under the new policy set by the Conservative government of Boris Johnson, all Hong Kongers who have a British National Overseas Passport would be able to move to the UK and remain for five years before having to apply for permanent settled status. It’s estimated that at least 350,000 Hong Kongers have this passport and 2.6 million are eligible for it.

Johnson intends for this policy to hit back at China’s tyranny, but it mostly just opens up his nation to millions of aliens who will complain more about British colonialism than Chinese communism. The UK’s current immigration rate is roughly 300,000 per year and Johnson’s government wants to reduce it to less than 100,000 per year. That’s impossible to do when nearly half of Hong Kong’s population is now eligible to migrate to the U.K.

The UK’s decision signals the silliness of a Western cold war against China. Rather than a conflict between two rival civilizations, it becomes a lame ideological war between liberal democracy and communism. The China hawks just want to impose the fruits of freedom on the Chinese people! China is no friend to the Dissident Right or our ideas, but that shouldn’t blind us to what a new cold war will result in. It would empower America’s Homo Empire and cement liberalism’s terrible effects. It also distracts us from the real threats to our civilization’s survival. China is not the one organizing Black Lives Matter protests and endorsing the destruction of our heritage; it’s our own elites.

The US is also considering granting refugee status to millions of Hong Kongers. Secretary of State Mike Pompeo said in early June that the Trump administration was “taking a look at it.” Legislation to give Hong Kongers refugee status has earned bipartisan support in both chambers of Congress. This act will do nothing to preserve Hong Kong’s autonomy, but it will allow tens of thousands of Hong Kongers to come here and exacerbate America’s demographic transformation.

It’s also strange for Republicans and conservatives to deeply care about Hong Kong’s plight when our own country is going through a cultural revolution that none of them can stop. They complain about Hong Kong’s lack of freedom when their own constituents face job loss and deplatforming for saying All Lives Matter. China isn’t pulling down our statues, getting ordinary people fired for thought crimes, burning and pillaging stores, or defunding our police. Yet, these politicians can’t be bothered to go after the marauders, defend our heritage, or protect our civil liberties.

Some conservatives try to claim that the “ChiComs” are the secret power behind America’s unrest. “I would actually argue that many of the aspects of Mr. Floyd’s murder are driven also by the CCP [Communist Party of China],” former Trump strategist Steve Bannon told the Asia Times. “Think about it. Mr. Floyd was murdered by these police officers. However, we now know from the autopsy he had COVID-19, which came from the CCP. Whether it came from a lab or part of a biological weapons program is beside the point.”

Bannon also blamed the fentanyl in Floyd’s system and his counterfeit money on the ChiComs. He claimed that China taking all our manufacturing jobs ensured “Mr. Floyd never had access to a great manufacturing job.” Mr. Floyd’s criminality is a better reason why he never had a great job.

Bannon says that China will be the “defining aspect” of the 2020 election.

Fox News host Laura Ingraham asked her fans to “raise your hand if you believe the CCP has its hands in the riots and the current push to destabilize America.” Ingraham is looking in the wrong direction. The rioters have earned the support of current and former American military generals, kneeling FBI agents, every corporation imaginable, and most politicians — Republican and Democrat. She should probably ask about the American deep state’s role in the current push to destabilize America. If China was behind the riots, we wouldn’t have James “Mad Dog” Mattis, an eternal servant of the military-industrial complex, saying Antifa represents America’s true values.

The unrest shows our real threat is domestic, not foreign.

Your humble writer has critiqued right-wing hagiography of China in the past. In March, I wrote:

China doesn’t care about our cause, and the Han will never be our allies. China is developing biological weapons to specifically target whites. The Han treat all of their ethnic minorities like dirt, and they can’t wait to treat us the same way.  Chinese global domination will mean the eclipse of white civilization. It will probably be worse for white people under GloboHan than globohomo. At least globohomo doesn’t put us in concentration camps.

That is still largely true. However, the possible China Cold War is shaping up to be more cringe than I thought. I argued that competition with China must be “seen as a war of peoples, not of clashing global ideologies.” Unfortunately, it is shaping up to be just another competition between “freedom” and communism. Our leaders think that Hong Kongers can become Britons or Americans overnight. They also think the Han majority also secretly want to be just like the West.

The situation has also changed a lot in the last few months. At the onset of coronavirus, it appeared China would dominate the discourse for the rest of 2020. The disease exposed the dangers of globalism, manufacturing outsourcing, and mass immigration. It also presented the opportunity to shift America’s attention away from the Middle East and Russia to the great non-white threat in the East. The idea we would witness a great cultural revolution that toppled monuments and transformed American life seemed far-fetched when we’re all under lockdown.

Coronavirus is no longer seen as a foreign threat, but a bogeyman raised by liberal elites to buttress their power. China’s meddling seems less threatening when American elites openly declare war on our heritage and want to turn whites into second-class citizens. Life under Chinese domination would be terrible, but it’s not an immediate threat. We need to focus on the regime we actually live under.

And a Cold War with China strengthens the “Empire of Nothing.” It encourages senators to continue to pour millions into the military-industrial complex. It distracts us from the real internal enemies. It demands we welcome millions of foreigners who are “oppressed” by the communists and conduct “humanitarian” interventions in Africa to stop Chinese encroachment. It solidifies America’s fake identity as just an egalitarian idea open to all; we need that marketing pitch to sell to China’s potential allies and say we are the real democracy. It makes us care about places we shouldn’t care about, like Hong Kong and Xinjiang. It’s what crooked generals, CIA spooks, State Department AWFLs, neocons, and the think tank blob all want.

The good news is that we are likely incapable of another Cold War. Journalist Aris Roussinos made astute points about America’s rivalry with China in his recent article on our national decline. For one, we shipped out the manufacturing base that won us the first Cold War to China. Second, we are far too economically entwined with China to turn them into an enemy like the Soviet Union. Third, we utterly lack the national will and social cohesion to wage a Cold War against China. “It is hard to imagine an American governing class scandalized at calling COVID a Chinese virus waging an existential conflict against China to a successful conclusion,” Roussinos writes.

America’s cultural revolution should make us wary of any attempts to make us see China as the immediate enemy. We don’t want to support the Empire of Nothing that crushes our traditions and demonizes us to spread freedom to the far East.

We want it to end so we can be free.