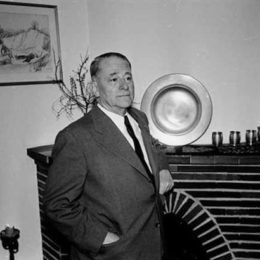 If you search for Carl Schmitt on Counter-Currents, you’ll get a veritable deluge of articles written or inspired by this most eminent of German jurists. From my own humble attempts at applying his friend-enemy distinctions to American race relations, much grander thinkers’ treatments on the deeper aspects of Schmittean thought, and his own writings, the influence of the man is undeniable. Time and the eventual success of our intellectual project will determine whether we merely stood in this giant’s shadow, or saw further than anyone else because we held the privilege of standing on his shoulders.

Schmitt confuses the liberal world order and leaves it dumbstruck. Much like the incredulous liberal of memetic yore who can but point and sputter at a Right-wing meme, the liberal world has done its darnedest to ignore Schmitt even as it grudgingly recognizes his unparalleled intellectual influence. The liberal worldview reacts to Schmitt and us in such similar ways because Schmitt is so incredibly us and we are so incredibly Schmittean. But that is a tale for another day.

Instead, I’d like to turn your attention to a biographical episode of Carl Schmitt’s life. He was at one point, believe it or not, canceled.

Oh, they did not call it canceling back in the day. It was known as “denazification.” It meant internalizing the narrative that all Germans were at fault for the actions of the German regime during the Second World War. It meant acceding to the claim that all Germans are evil; indeed, that all Germans qua Germans are uniquely evil and that any authentic expression of Germaneness can only result in evil ends. It meant developing a massive guilt and self-hatred complex at a national level, but also at a very individual level. Of particular interest were the intellectuals, the professors, the artists, the jurists, the thinkers, the philosophers, the historians — anyone who could provide a coherent counter-narrative to the one of the conquering forces. To refuse denazification meant forfeiting any position in public life, in academia, media, or anywhere of consequence. Carl Schmitt refused denazification, losing his university posts and spending the rest of his long life as a private citizen as a result. And yet here we are discussing this illustrious man.

The Left and its many creatures imagine that a man is prominent and respected because he is a professor, that the students hang on his every word because he speaks his words in a lecture hall. It does not occur to them that a man becomes a professor for the same reason he is prominent and respected: what he has to say is worth listening to, eliciting the fascinated response of the students. Indeed, it does not occur to these builders of institutions — as they sometimes like to call themselves — that the university is the unnecessary (though facilitating) party in this relation. The professor and his enthralled students may be in the woods somewhere, dressed in buckskins and sharing wisdom by the creek.

Carl Schmitt did not wear a buckskin between the years 1945 and 1985. He swapped out the lecture hall for the correspondence desk and the salon. In person and through epistles, he continued his career not only as a political thinker, but also as a teacher to both young intellectuals and established and eminent thinkers.

Much as the late Carl Schmitt, we too are made to meet in secret, communicate through epistles (though we call them e-mail and social media now), and on the occasion we try to make a grand happening, bad actors barge in and try to disrupt our symposia. Our foremost intellectuals are denied the social status and recognition they rightfully deserve. There are no Dissident Rightists in academia. There are no Dissident Rightists in media, with the possible exceptions of the venerable Ann and Tucker. And yet we’re still standing. The university goes on, if online and under the name of Counter-Currents.com.

Carl Schmitt could have bowed his head, said a few magic words, and then been reinstated. But he refused to. To do that would have meant repudiating all that he believed and stood for. To accept denazification would mean that he didn’t really mean all that is written in Concept of the Political, Legality and Legitimacy, Crisis of Parliamentary Democracy, or his many other works. He could have grabbed on to the straw of his ideological disagreements with the National Socialist regime or National Socialism as such and held that straw all the way back to social rehabilitation. The occupation forces in Germany were especially adept at perniciously exploiting the human capacity for self-effacement and self-deception in the face of overwhelming force. But Carl Schmitt persisted in remaining what he was.

He wasn’t just a great thinker. His integrity in the face of the cancel culture of his day behooves us to also call him a great man.

« The Politics of Meat:
An Ecofascist Perspective