No Fantasy for White Men 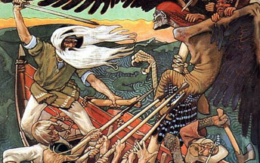 I grew up reading fantasy books. Throughout my teenage years, fantasy books gave me countless hours of entertainment. Yet with any form of entertainment that has a predominantly white male audience, the fantasy genre has also succumbed to anti-white propaganda. Nevertheless, reflecting on the modern fantasy genre has reminded me of the importance of the hero’s journey described in many European epics and mythologies.

The monomyth, or what some refer to as the “hero’s journey,” can be understood as a broad genre of storytelling where a protagonist goes on an adventure, experiences trials and tribulations, and returns home after achieving victory. In The Hero with a Thousand Faces, Joseph Campbell describes the basic narrative structure of the monomyth and hero’s journey as having three main acts: departure, initiation, and return. Each act has its own scenarios and tropes. Campbell notes that many protagonists leave their village or country during the departure act, embark on continuous trials during the initiation act, and return to their original village victorious but also as a changed person. In the end, the hero chooses to either stay in the village to live happily ever after or continues their adventure for a larger goal or purpose.

This structure is evident in J.R.R. Tolkien’s The Hobbit and The Lord of the Rings. For my 11th birthday, my mom got me a Tolkien book set that included The Hobbit, The Lord of the Rings, and The Silmarillion. It took me almost a year to read the entire set, but those books changed my life. Tolkien’s books got me interested in the fantasy genre and sparked my passion for reading. As a teenager, The Silmarillion became my bible, as numerous black metal bands, artists, and songs got their names from the characters and settings listed in the book. The Silmarillion also appealed to me because it was written in a similar style to the classical European epics and mythologies that inspired Tolkien. If it was not for The Silmarillion (and Christopher Tolkien’s efforts in compiling his father’s work), I may never have read Beowulf, the Mabinogion, or the Kalevala.

Knowing that I read and enjoyed all the Game of Thrones books, my girlfriend got me four fantasy books for Christmas in 2015. These books were The Name of the Wind, The Blade Itself, The Way of Kings, and Gardens of the Moon. Each of these books were recommended for people who enjoyed Game of Thrones and wanted something similar to read. After thanking my girlfriend for the thoughtful gifts, I decided to start reading the shorter books first and the longer books last.

The Name of the Wind is the first book in The Kingkiller Chronicle series by Patrick Rothfuss. Unlike most fantasy series with a large cast of characters, this series focuses on one main character, the once-famed assassin Kvothe. The majority of the first book follows Kvothe as a beggar, pickpocket, and university student. The second book, A Wise Man’s Fear, has Kvothe embarking on more adventures throughout the world.

I felt that both books were well-written, but I had a hard time relating to the main character. Despite there being only two books, there have been various attempts by Hollywood to adapt the series into a film or TV show. This makes sense, as Kvothe often reminded me of a self-hating white liberal. I finished reading both books back-to-back within a month, and while I enjoyed some aspects of the story, I would not recommend the series due to its lackluster protagonist and slow pacing.

The next series I chose to read from my Christmas book collection was The First Law Trilogy by Joe Abercrombie. The series follows several main characters across three kingdoms at war. The first thing I noticed when I started reading the first book, The Blade Itself, was how the author changed and altered many of the common fantasy tropes and archetypes. The dashing swordsman became a crippled torturer. The hulking barbarian ends up becoming a philosophical pacifist. The elderly wizard was more interested in politics than magic.

I enjoyed the series, but I found the overall dark humor to be somewhat distasteful at times. I also am conflicted about the author’s attempt to turn so many classic fantasy tropes upside-down. I understand and appreciate originality but there were times where characters seemed different just to be different. Overall, I would recommend the series with the caveat that many people in our community would find some of the characters and overall humor “degenerate.”

After a short break, I spent the winter of 2016 reading the first two books of Brandon Sanderson’s The Stormlight Archive series: The Way of Kings and Words of Radiance. Sanderson is a renowned author who has written various young-adult series and was chosen to finish The Wheel of Time series after Robert Jordan died. Sanderson is an incredibly talented writer and even teaches an annual writing course at Brigham Young University. The Stormlight Archive has been a project that Sanderson has been working on for years and the overall story is expected to cover ten books.

The series takes place in the world of Roshar where different kingdoms, nations, and classes are engaged in conflicts over powerful artifacts that were left over from the ancient wars between the forces of good and evil. Each chapter follows various characters from all the different nations, each with their own goals and struggles. While each book is over 1,000 pages, I found myself staying up late each night to find out what would happen next. There were many likable characters and the detailed world-building made me feel immersed in the various lands and locations. Unfortunately, there are some plot twists in the third book, Oathbringer, that seem to give lip-service to the anti-white narrative about native peoples and native lands. Whether this virtue-signaling plot twist was unintentional or not, I hope that the future books in the series do not incorporate unnecessary virtue-signaling.

The last book from my 2015 Christmas gifts was Stephen Erikson’s Gardens of the Moon, the first installment in The Malazan Book of the Fallen. This ten-book series is an epic saga over various continents in a world with different empires and races, some with thousands of years of lore. I chose to read this series last and I am glad I did, as it took me over three years to finish. It was only during the COVID-19 pandemic that I had enough time in quarantine to finish the series.

Erikson originally planned to make a table-top game like Warhammer 40K, but used the races and lore he created to write an epic fantasy series. Gardens of the Moon is notorious for throwing the reader into a complex world without any exposition or background. The second book, Deadhouse Gates, follows a completely different cast of characters on a different continent with a different plot. Each book switches between these plots and continents until everything merges in the eighth book, Toll the Hounds. Erikson is a unique writer, but because of his writing style, I had a hard time following certain plot points and events.

My favorite parts of the series were the different worldviews and philosophies of each race. The morality and beliefs of each race were often shaped by their environments and ancestral rivalries. There are various moments in the series where different characters will question the meaning of freedom, rights, and individuality. Naturally, there were always characters to discredit any “non-liberal” ideas, but I still enjoyed the different moralities and histories of each race. I finally finished the series last month, and this is the series that I would recommend the most from my 2015 Christmas books.

While I enjoyed reading these modern fantasy series, I still prefer the classic epics and mythologies of our ancestors. From my experience, nothing comes close to the fulfillment of reading such classics as the Kalevala, Kalevipoeg, Beowulf, or the Nibelungenlied. For those like me who enjoy the works of Tolkien, I encourage all of you to read these classics. If the antiquated prose is not your cup of tea, then support the authors in our community who are creating fantasy and other fictional works for our people. One recent example is Prometheus Rising by Jason Köhne, an inspiring epic that all Tolkien fans in our community will enjoy.

Sometimes the best stories focus on the battles between good and evil. They always tell the same hero’s journey where a young man leaves his village to save the world and return a hero. As cheesy or cliched as these stories may be, they are the archetypes of our mythologies and folklore. They are the stories of our cultures and ancestors. The monomyth of the hero’s journey will always be the story of white people. One day, these stories will describe our own quests, struggles, and victories.

I enjoyed fantasy books as a teenager. Yet as an adult, it is time to embark on my own hero’s journey. There will be many quests and adventures. There will be many trials and tribulations. The paths and challenges will be different for each of us. Yet we all have the same goal to secure the existence of our people and a future for white children. In this goal, we shall be victorious. We have no other choice. There is no fantasy left for white men. We must become the heroes of our own reality.