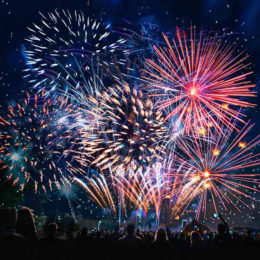 The Fourth of July is a bittersweet holiday for me. I have fond childhood memories of fireworks and BBQs with my family during each Fourth of July weekend. Yet as an adult, I have been living in Europe where I never celebrate the holiday. Due to the recent extension on travel restrictions, I spent this Fourth of July back in the USA. Unfortunately, this year’s holiday seemed more like a funeral than a celebration of the nation’s independence. The harsh reality is that America no longer represents or protects white Americans. It is time for white people in America to celebrate our own independence by forming our own communities, cultures, and identities.

As far back as I can remember, I always wanted to live in Europe, particularly in Scandinavia. That was where all the heavy metal bands I listened to as a kid and teenager came from. While I never had a complete disdain for the US, I always hated certain aspects of American culture. I never liked sports and I hated rap music. I also never got along with the non-white kids at my school. My father recommended me to stay away from them and later explained to me that non-whites committed violent crimes at a much higher rate than white people. Thus, I wanted to move to Europe where I could live safely amongst white people while also attending the heavy metal festivals I read about in magazines.

Yet despite having to live and go to school amongst non-whites, my parents made sure that I had the best childhood and teenage experience possible. My mom always got me video games, fantasy books, and heavy metal albums for birthdays and Christmas. We also celebrated all the major holidays. When I was a kid, the Fourth of July was a time where I would light fireworks with my family as we ate hot dogs and waved American flags. You could always see merchandise with bald eagles with the words “freedom” and “liberty” printed in red, white, and blue. Even at an early age, I realized that only white Americans took pride in these symbols and meanings. Non-white kids may have been excited about the fireworks, but only white families raised the American flag in front of their homes. Only white people cared about “the land of the free and the home of the brave.”

America no longer protects the rights, liberties, or freedoms of white Americans. The police and elected officials no longer protect the physical safety of white people. Yet when white people try to defend themselves, the police and various law enforcement agencies move heaven and earth to find them and arrest them. President Trump cannot even protect his own supporters attending his rallies or speeches without being attacked by BLM and Antifa. The country that white Europeans built no longer exists. Whatever has replaced America now continues to allow and promote propaganda, intimidation, and violence against white people.

Modern-day America seems more like an oligarchical empire than a Western, democratic nation. When I look at the current state of America, I see an empire defined by anti-white liberalism, tech-censorship capitalism, and endless wars in the Middle East for Israel. The demographics of the country show that white people have already become minorities in specific age groups and geographical areas. As white people decline in population, so too will our customs, traditions, and holidays. It is only a matter of time before the Fourth of July is labeled too “racist” to celebrate. Maybe America’s Independence Day will be replaced by a Wakandan day of atonement. Or maybe the Fourth of July will be erased and rewritten, just like the 1619 Project is rewriting American history in public school systems.

Even in my own lifetime, I have seen the dismantling of white holidays and festivities. First, they started criticizing Christopher Columbus and guilting white people for celebrating Columbus Day (despite the questionable background of Columbus). The holiday was then given an alternate title of “Indigenous People’s Day.” Within the last few weeks, various statues of Columbus have been vandalized, torn down, and removed. The same has occurred to other statues in the US of historic Europeans.

On June 19th, 2020, at Golden Gate Park in San Francisco, California, various statues were vandalized and toppled beyond repair by Antifa and BLM. The statues were of Miguel de Cervantes, Junipero Serra, and Francis Scott Key. Cervantes was the author of Don Quixote, a milestone in European literature that many consider the first modern novel. Despite having his statue vandalized in protest of “racism” and “slavery,” Cervantes himself was a slave. His ship was captured by Muslim Ottoman pirates in 1575. Cervantes was forced into hard labor in Istanbul before his ransomed release five years later in 1580. Cervantes would use his experience as a slave in many of his writings.

Junipero Serra was a Spanish Franciscan priest who created 21 Catholic missions from San Diego to San Francisco. Along with religious institutions, Serra and his Franciscan friars brought transportation and infrastructure to the area that would become California. Despite his many charitable works, BLM and Antifa vandalized a statue of Serra at Golden Gate Park and another statue of Serra at the California State Capitol in Sacramento during this year’s Fourth of July celebrations.

The Fourth of July holiday would not exist as we know it without Francis Scott Key. Key was a lawyer and poet who composed the lyrics to America’s national anthem. Key witnessed the attacks on Fort McHenry during the war of 1812. After seeing the American flag still flying over the fort at dawn, he immediately wrote the lyrics to what would become “The Star-Spangled Banner.” Even as I write this, I hear fireworks going off in my neighborhood. When I hear any type of fireworks, I will always think of the Fourth of July. It was Key who was able to transform a dangerous battle scene into explosive emotions of freedom and liberty. Over 200 years later, communist terrorists would vandalize Key’s statue at Golden Gate Park.

Perhaps it is time for white people in America to form a new identity. If America no longer represents us or protects us, why should we be loyal to America or identify as Americans? I might have been born in the US, but that does not mean that I will always live in the US or die in the US. Perhaps I will continue to live somewhere else.  Perhaps the US will Balkanize and dissolve into various nations. Maybe white people can move to areas where they can form communities, neighborhoods, and businesses around other white-positive people. Certain European countries even offer right-of-return programs to people with family members originally from those countries. These are just a few different ideas for people in different situations. Regardless of your situation, it is time that white people declare their freedom and independence from the oppressive tyranny of the anti-white USA.

Despite being proud of my Danish and Karelian heritage, I have been told by people that I will always be “just an American.” Would they say the same thing to the people that lived in the USSR or Yugoslavia? Will those people always be Soviet or Yugoslavian? No. While those oppressive regimes impacted their lives, it is no longer their identity. They are Russians and Ukrainians. They are Serbs, Croats, and Macedonians. They are the Slavic people of the white race. And just like all empires that grow too large and become too diverse, America will eventually fall and burn. Perhaps only from those ashes will white people in America be able to rebuild a society for themselves. A new Denmark. A new Karelia. A country dedicated to securing the existence of our people and a future for white children.

Until then, I will always be proud of my race, my ethnic background, and my country of origin. No matter where I live, I will always have my accent, my personality, and my positive attitude. I will always enjoy wheatgrass for breakfast, green tea for lunch, and pizza and red wine for dinner (along with a shot of whisky with friends). Yet wherever I live, I bring my racial genetics and cultural behaviors with me. I will maintain my languages so that I can teach them to my future children. It is through these things that we can rebuild our communities, culture, and identity.

In the land of the free and the home of the brave, let freedom ring with ethnic sovereignty and white solidarity.