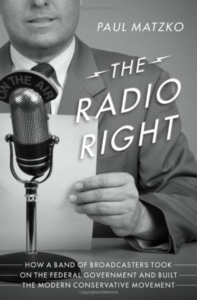 Paul Matzko [1] [1]
The Radio Right: How a Band of Broadcasters took on the Federal Government and Built the Modern Conservative Movement
New York: Oxford University Press, 2020

The decade of the 1960s is laden with irony and contradictions. On the one hand, especially in the early days of the decade, there was the appearance of national unity and calm across America. But just under the surface, explosive forces were gathering. One of these forces was “Right-wing” radio. This situation is explored by Paul Matzko from a libertarian point of view.

It was I Love Lucy, the first television smash-hit sitcom, which helped create Right-wing radio. Better said, perhaps, was that it was the technical and cultural triumph of television in the 1950s that freed radio to move into controversial political areas. In the 1930s and 40s, radio was controlled by a few corporations and they collectively chose to not rock the boat. Radio was thus a bland stream of Westerns, Buck Rogers, big band music, and news. After television burst upon the scene, radio stations became free to air whatever programming they felt like playing.

Well, the radio stations were sort of free. When television started to capture large audiences, radio stations had to scramble for content that paid. One such paying program was Reverend Carl McIntire’s [2] [2] show, the Twentieth Century Reformation Hour. It went from being played on one station in 1957 to 480 stations in 1964. 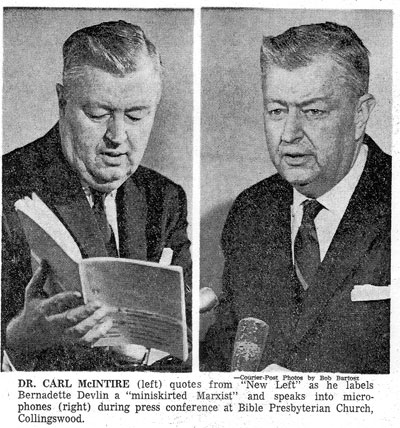 Carl McIntire is one of the most influential Protestant ministers in American history. His efforts created the New Right coalition that produced Barry Goldwater and Ronald Reagan.

McIntire was a New Jersey-based Presbyterian who fell on the Fundamentalist side of a bitter Modernist/Fundamentalist conflict among Presbyterians in the 1920s. The Kennedy Campaign saw McIntire as a threat during the 1960 West Virginia Democratic primary. West Virginia was heavily Protestant, and the Kennedys feared an anti-Catholic swell of primary voters due to programs like the Twentieth Century. 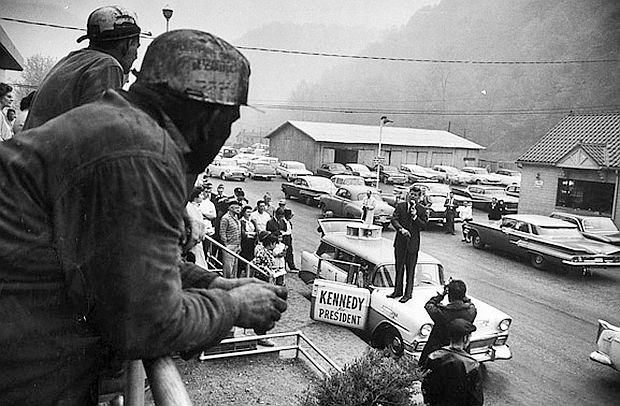 It hardly mattered though — at least in 1960. The Kennedy campaign’s expert strategizers carried out one of the greatest domestic political feats in the highlands of the coal country. The arch-Irish, arch-Catholic Kennedys reached out to an enormous and influential mainline Protestant group called the National Council of Churches (NCC), and the NCC mailed pro-Kennedy literature to every Protestant minister in West Virginia.

It worked. Kennedy won, but Kennedy’s battle with Right-wing radio was just beginning.

This book doesn’t go too deeply into the content of what Right-wing radio shows were saying or the reason for their growing, cash-flush audiences, but I will try to explain using my own words and ideas:

However, most of the problems above — especially points 4 and 5 — were unfashionable to bring up in polite company. There were many anti-anti-Communists around and pro-Kennedy liberals controlled the high points of American culture and society.

Right-wing radio offered a chance for politically active anti-Communists to get around the liberal cultural chokepoints. In the early 1960s, one in nine Americans listened to shows like the Twentieth Century Reformation Hour. Matzko:

You did not have to be a committed conservative activist to turn the radio dial to a conservative program. You could do it in the convenience of your own home, in your car on the way to work, or on a handheld set with headphones on. Holding a Right-wing newspaper under your arm visibly branded you as conservative, but radio was anonymous. And that anonymity made it possible for those who may have been previously apathetic about politics or politically moderate to test out conservative ideas without being forced to commit to the ideology. As broadcaster Clarence Manion put it in 1965, “We know from eleven years’ experience that, once Mr. Average American gets a chance to find out what is happening to his country, he becomes a dedicated Conservative.” Radio was an evangelistic medium for the New Right. (p. 24-25)

It was the 1962 Polish ham boycott that alerted Kennedy to Right-wing radio’s power and political impact. During the 1960 election, Kennedy had run on a strong anti-Communist platform. Then he hit upon a plan to divide the Communist world by increasing trade with Poland and Yugoslavia in the form of ham and baskets respectively.

Kennedy’s plan had some merit, but there were obvious drawbacks:

Anti-Communists radio hosts in Miami alerted the public to the problem and a massive, women-led boycott of Polish ham followed. The boycott was so powerful that the Kennedy administration had to change direction.

The women involved in the boycott often identified themselves with the prefix “Mrs.” in their letters to corporate headquarters and editorials. This situation would never have been noticed had white women not voted against Hillary Clinton in 2016, thus causing a Dindu/Leftist backlash against “Beckys” and “Karens” that continues as this article goes to print.

Right-wing radio also supported General Ted Walker — a Kennedy rival. Walker created a panic in the Kennedy administration as well as his liberal supporters. For a time, they genuinely thought he would lead some sort of military coup.

After the 1962 Polish ham setback, Kennedy turned the ideas laid out in the Reuther Memorandum — a document named for the two union leaders who crafted the ideas to fight Right-wing radio. The Memo recommended: 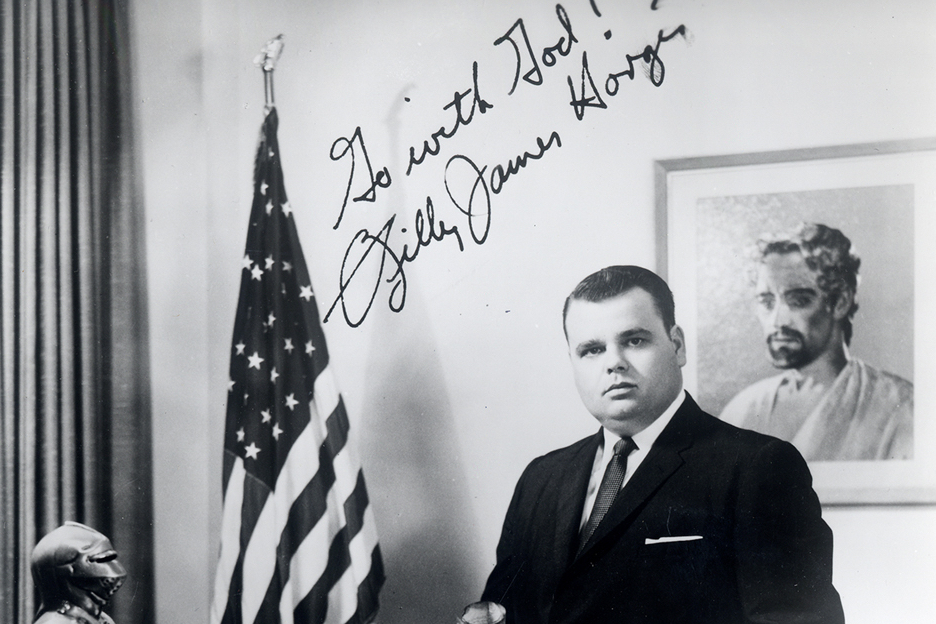 Billy James Hargis was a target of the Kennedy administration’s attack on Right-wing radio. It was during this time that terms like “hate groups” became part of the lexicon.

With the Reuther Memorandum as a guide, the FCC (along, in some cases, with the liberal United Church of Christ) launched “Fair Use doctrine” lawsuits against various radio stations. The Reuther strategy proved to be effective; Right-wing radio declined starting in 1964, and was nearly gone by the end of the Nixon administration.

President Nixon was a man with the same basic outlook as President Kennedy. He was not a conservative, nor was he “Right-wing” in the way that Carl McIntire was. Indeed, the political differences between the two men were more related to their opposing coalitions. Kennedy had passionate “civil rights” supporters. Nixon had supporters from the victims of “civil rights.” Nixon worked against Right-wing radio as much as Kennedy did. President Lyndon Johnson was less involved in suppressing radio, but he didn’t put a stop to the forces Kennedy put in motion.

What turned things around was FCC policy during the Carter administration. Then, the FCC focused on expanding new communications technology such as cable and satellite. As a result, the restrictions on electromagnetic spectrum bandwidth that formed some of the logic for the Fair Use doctrine were made moot by the advance of communications technology. With such a gap in FCC suppression of free speech, Ronald Reagan was able to build a considerable following in 1970 on a syndicated radio show which eventually made him president. By 1987, the Fair Use doctrine was quietly laid to rest.

The result was a return of Right-wing radio and other forms of media. Carl McIntire was a pioneer for Rush Limbaugh, etc. Of course, today, Right-wing media (at least the race realist Right, rather than the religious) is again suppressed. This time, however, the suppression of free speech is led by private corporations. Censorship was overcome in the past through technological advances. Legal strategies, new forms of technology, and payment processors will, therefore, be crucial to our success in the future.

[2] [6] Carl McIntire (May 17, 1906 — March 19, 2002). McIntire was descended in part from New England Puritans. This was very common for anti-Communist activists at the time. The premier ethnic conflict in America is that of Yankees vs. Jews. In McIntire’s case, of course, the conflict was rendered into a proxy of anti-Communists vs. Communists.

[3] [6] Although “Mainline” did refer to mainstream Protestantism in the 1960s, the term actually refers to the collection of liberal Protestant Churches along Philadelphia’s “Main Line” railroad. The Mainline Protestants of Philadelphia were bitterly opposed to Carl McIntire, who was based in Philadelphia’s New Jersey suburbs. Indeed, the American midlands are often where American cultural conflicts are fought.