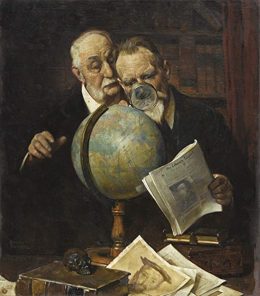 America’s problem is that we are a nation without fathers, without men. We are a nation of children raised by children. Preoccupied with toys and trinkets, shiny playthings that divert our attention, we shirk responsibility and cry when we don’t get our way.

I’m not blaming you, Mr. Individual. A man cannot be a man in a vacuum devoid of masculinity. Manhood requires community to strengthen it. Womanhood requires leadership from men. Without men to lead, what can be expected of women other than infantility? A waltz needs one partner to lead and the other to follow, but this waltz has been replaced by the “running man” and the twerk.

Indeed, the race riots of 2020 are the collective temper tantrums of coddled, fatherless blacks and spoiled, entitled whites. Not a man nor a father exists among them, or the rest of us. No discipline, no mentorship, no wisdom, no respect. Only the chaos of perpetual adolescence.

Donald Trump is not a man. He hides in his bunker, looking for an apron to cling to, while he tweets words he’ll never back up with action. He’s a spineless coward. He’s been challenged with the greatest shit test of all, and he’s failed, bigly. America needs to be thrown across Donald Trump’s lap and spanked, with a belt, but alas, that might get him or someone else called a bad-white name, and America is deathly afraid of being called those names. We’re fragile children, whose bones are too brittle for mean words. Easily broken, quick to capitulate.

Look in the mirror, eyes wide open, but don’t beat yourself up too much. I’m standing there with you, my friend, my reflection as guilty as yours. My father had an apron to hide behind, and so did his. Besides, it’s been a long time since a father really took his misbehaving kid behind the woodshed. Most are too busy with their shiny toys to be bothered.

Blacks need a father. They need discipline, not kid gloves. White people used to know this. We filled that role. Now, we have coward NYC police officers kneeling in “solidarity” with the rioters they should be arresting. They’re afraid to administer a spanking, afraid of being called a mean name. I guess these cops need a daddy too.

Antifa. Don’t get me started on the trust fund babies. Remember Tim Kaine’s son? Oh, but he has a father (technically), right? Gotcha! No. Kaine is not a father, he’s simply a chromosome contributor, too afraid of woodsheds to ever go near one with his son. That’s the story of Antifa. Spoiled. Entitled. Brats. Spineless parents. American rot in every home.

Hollywood. Celebrities. Gated communities, security guards. Money. “We’re standing in solidarity with the protestors!” they tweet from their Caribbean summer home. They don’t have real fathers, either. Cowards.

I suspect this lack of fathers in America isn’t as new a thing as it might seem. Alas, Ward Cleaver and Jim Anderson from Father Knows Best were pop culture fictions, 1950s idealizations. But even those fictitious characters were soft, passive, non-confrontational, lacking the assertiveness and assuredness of their betters. My own father, a good man, an honest man, has never tread out of bounds. He’s never ventured thoughts that were novel or brave. I don’t blame him, because neither did my grandfather.

My father and your father, all of our fathers, lived their lives with an infection, a pandemic worse than Coronavirus. A viral contagion inflamed by nihilism and selfishness. It has rapidly spread since the day the ink dried on parchment in 1787. We didn’t need a Chinese wet market to spawn this virus. All it took was giving in to human nature. No quest for rights or “pursuit of happiness” ever absolved us from our duty to posterity. But here we are, like orphans in search of a family.

Still, there are glimmers of sanity. The fact that you’re reading this offers us all hope. A blazing fire begins with a spark, does it not? And there is fuel aplenty. The spirit of manliness, of fatherliness, it’s there in you. I know it isn’t dead.

My own father, a Boomer, is feeling the rage, sensing the regret, pondering forbidden thoughts, finding some courage. He’s old, he has no energy to fight, but he finally gets it. He knows what once was, and what has been lost. He won’t be around much longer to see change, but he knows what must be done.

As for the rest of us, no more aprons to hide behind. No shiny toys to occupy us. Time to man up. Time to strike the match and fan the flames that burned inside our ancestors.