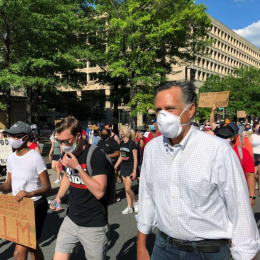 “We need a voice against racism. We need many voices against racism and against brutality,” he told reporters. “We need to stand up and say black lives matter.”

Romney’s march photo-op was incredibly goofy. Here was this model WASP financier walking down the street surrounded by Left-wing miscreants. They sang the horrid tunes of the sixties Civil Rights Movement as they walked with Willard Mitt Romney down downtown DC.

Romney’s siding with racial agitators who want reparations and police abolishment keeps with his family legacy. His father, George Romney, marched with civil rights protesters when he was Michigan governor in the sixties. Romney the Younger sees this as a point of pride. In truth, it’s a disgrace, and shows how deeply committed the Romney family is to white dispossession.

George Romney was a standard moderate Republican [4] of his day. He declared “discrimination” the biggest problem facing America when he became governor in 1963. He eagerly championed the Civil Rights Act of 1964 and refused to support Barry Goldwater, the Republican presidential nominee that year, because of the conservative’s opposition towards it.

Mitt brought up his father last weekend to celebrate the elder Romney’s response to the 1967 Detroit riots. According to the younger Romney, his father knew that “force” alone would not stop the riots; the government must appease the black rioters with more gibs. He felt he honored his father’s legacy by siding with BLM.

This is my father, George Romney, participating in a Civil Rights march in the Detroit suburbs during the late 1960s—“Force alone will not eliminate riots,” he said. “We must eliminate the problems from which they stem.” pic.twitter.com/SzrcAyfPD8 [5]

This was an unsubtle subtweet of President Trump and his demand to use force against the current race rioters. However, the elder Romney begged for federal troops [7] during the Detroit riots and watched helplessly as Michigan’s largest city burned. LBJ, not Romney, was the reason the troops were delayed. LBJ worried about the optics of sending in troops straight from Vietnam against black marauders. It would signal the failure of his Great Society program and possibly help a future presidential rival in Romney.

The riots helped usher in a black takeover of Detroit and the city has been a shithole ever since. No good came out of it and no leader performed well in the face of the chaos. Gov. Romney later blamed whites for the riots. Romney’s presidential aspiration died against Richard Nixon, the man who promised to restore law and order.

Romney’s worst acts [8] were to come as Nixon’s Housing and Urban Development secretary. This agency exists solely to give handouts to non-whites and Romney felt empowered to advance its insidious cause. The former Michigan governor interpreted the Fair Housing Act of 1968 as a mandate to forcefully integrate white suburbs. He denied federal money to cities that resisted his plans to build projects in white neighborhoods. The money denied included grants for basic needs such as highway construction and sewer repair. He thought the suburbs were a “white noose” around black communities.

Romney deliberately targeted Warren, Michigan, a suburb that attracted white refugees from Detroit. He wanted to impose Detroit’s undertow on those who fled the riots and crime. As governor, he had previously sent state police to the town to protect one interracial couple from harassment.

Nixon opposed Romney’s forced integration program and overrode most of his deputy’s decisions. Disgruntled at his failure to impose multiracialism on the suburbs, Romney resigned from the administration in 1972.

His racial advocacy put him at odds with the Mormon establishment. Like his son, Romney was a devout member of the Church of the Latter-Day Saints. At that time, the Church still preached its hilariously white supremacist theology that black skin color marked them as disfavored by God. The LDS was one of the few churches to not fawn over civil rights. Its leaders expressed their concern to Romney, who ignored their advice to stay away from black advocacy.

This was a man who was so committed to multiracialism that he went against his own church, party, and core constituents to advance it. That’s serious dedication to white dispossession.

Romney’s zeal for punishing white America was shared by his fellow liberal Republicans. Nelson Rockefeller, John Lindsay, and John Anderson were all avid civil rights champions who couldn’t stomach the GOP’s appeals to the South. One of the only good things about Ronald Reagan was his crushing of this faction in the 1980s. Anderson ran a kind of NeverReagan independent campaign against the future president in 1980.

Modern-day Conservative Inc. hagiography insists Reagan defeated the moderates by exposing their big government tendencies. In reality, they were outmaneuvered on racial issues. Reagan campaigned and won on euphemisms for scaling back the civil rights regimes. Of course, as Chris Caldwell points out [9] in The Age of Entitlement, Reagan didn’t reverse the civil rights regime. But the popularity of his dog whistles made it uncomfortable for open supporters of busing and forced integration to remain within the GOP.

Romney the Younger’s BLM march signals a new era may be upon Republicans. Romney will likely join other Republican senators [10] in calling for major reforms of the police departments. The Utah senator and failed presidential candidate probably won’t call for defunding the police, but he might advocate for the end of qualified immunity and the suppression of police union power. Both ideas would make police even weaker to enforce the law. Without qualified immunity, police could be sued for everything and would fear using force against dangerous criminals. Police unions keep liberal dictates and shrieking at bay; without their support, cops would be powerless to resist progressive meddling.

Cops are, of course, servants of the state and do not merit unqualified idolization. They would happily arrest dissident Right-wingers if ordered to do so. That still doesn’t negate the fact that they operate as the thin blue line between white America and black criminality. Life would be far worse for white Americans if police were defunded or neutered. The same happened for whites under the boot of the civil rights regime championed by George Romney.

The Romneys probably had no idea about the consequences of their actions. They just think they were doing what’s “morally right.” They don’t think their grandkids will be the ones beaten by their black peers at schools, they don’t envision their houses suffering home invasions from newly empowered POC, and they don’t see their wealth being expropriated for reparations. They just all see these efforts as moving us closer to the multiracial utopia where everyone can live comfy suburban existences.

Both Romneys desired approval from the moral guardians of American society. They wanted to be liked by the press and assured they’re not racist by civil rights leaders. Many whites, particularly white elites, are like them. They want to gain respect, not lose it. They politely acquiesce to the demands of radical agitators in the hope that makes them a “good person.”

A “good” white person is ultimately a harmless one. He will be a good boy and listen and do what he’s told. You don’t have to worry about him complaining about busing, non-white crime, or mass immigration. He knows good people support those causes and he’s too busy making money to notice the shithole around him.

Mitt fantasizes about an America that can overcome its divisions and come together to cut the deficit. We just need to restore civility and decency to reach the promised land.

Unfortunately for Mitt, there will be no civility or decency in the America he’s helping to build. Civility is impossible in a system founded on racial resentment and one cannot be equal to those you kneel before. The new country will be worse for all whites, even wealthy white elites like the Romneys who can seclude themselves from most of its ill effects.

And it will be brought about by deluded whites who just wanted to be “good people.”