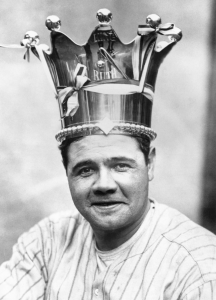 Here’s a story about Babe Ruth. One day in 1921, the New York Yankees were traveling by train to a baseball game with the team in one car, and the sportswriters in another. And everything was going swimmingly until, out of nowhere, the Bambino comes running screaming through the journalists’ car. Hot on his tail is a knife-wielding woman who happened to be the wife of a prominent politician. After the pair disappears into the next car, the journalists are left to ponder this embarrassing and potentially devastating episode. Are they to report it? Are they to introduce scandal to the Yankees and besmirch Ruth’s career? And after a moment, one journalist faced the others and said to the effect, “Boys, it’s a real good thing we didn’t see that, isn’t it?”

Much of what constitutes the culture wars today depends on perspective — as in whose perspective reaches the most people and is presented on the widest platform. Those journalists who witnessed this unsavory aspect of Babe Ruth’s life had the widest platform available at the time and could reach millions. Reporting on it certainly would have sold more newspapers. But it also would have contradicted the perspective the media had (or wanted to have) of sports heroes at the time — that they were, among other positive things, wholesome role models for America’s youth.

So, the journalists kept quiet about the affair, and life went on.

In many ways, today’s mainstream media and the Leftist elites which fund them are like those tight-lipped sportswriters in that train car — reporting only that which reinforces their perspective and silencing perspectives that don’t. This is more than half the battle. When Travis McMichael shot and killed Ahmaud Arbery in self-defense on February 23, 2020, the media reported only one side of the story, and the Left went ballistic. And now, after the video of George Floyd being held down by the Minneapolis police before dying in custody went viral, the Left is going ballistic again, this time indulging in looting, assault and battery, arson, kidnapping, and murder across the country. This is happening because the mainstream media frames the story as a murder when the investigation hasn’t even been completed. Officer Derek Chauvin’s right to be innocent until proven guilty has been shredded by a Leftist media that is not afraid to act on its anti-white racism. Further, the media also frames the ensuing riots as “protests” and “demonstrations” rather than present evidence that the rioters are both terrorists and criminals. They eagerly present that which supports their perspective, and do what they can to avoid presenting that which does not.

So, when blacks in this country misbehave, the media behave like those sportswriters in that train car — it’s not part of their perspective, and so they don’t report it. And when whites misbehave (or when they seem to misbehave but really don’t), well, then the media will make sure everybody knows about it. That sort of thing is like a Babe Ruth home run for them.

It’s not fair and honest. Then again, our mainstream media never cared about what’s fair and honest. Just the opposite, actually — especially when it comes to white people. Just ask Derek Chauvin, or the McMichaels, or the Covington kids, or Darren Wilson, or George Zimmerman, or the Duke Three. The list goes on. And, if you’re feeling frisky, you could even peruse Paul Kersey’s ever-growing list of memorials for whites who have been killed by blacks and ignored by the mainstream media.

Here is a list of American black-on-white murder victims from the month of May alone:

The national media reported none of this. The national media also does not report how in 2018, blacks committed over ninety percent of the 593,598 interracial violent victimizations, excluding homicide. No, they’d rather focus on the 56,394 crimes committed by whites and then blame President Trump for it all. The inconvenient fact that the proportion of white interracial criminality since 2012 has decreased from fifteen to ten percent since 2012 also gets overlooked.

There are a lot of things whites can do to counteract this racial bias in our mainstream media. First and foremost, however, should be to prop up media of our own. Where the mainstream media deals in lies and distortions, ours deals in truth, and from that truth comes justice. Of course, we have been doing this for a long time, but frankly, not enough of us have been pitching in. This must change. With the mainstream media now stoking the fires that are raging across our cities, truth and justice are what whites need today most of all.

When the sportswriters looked the other way on Babe Ruth’s indiscretions, they at least had a constructive reason. They were hiding what was sordid and violent to promote a wholesome — if somewhat unrealistic — image of America. Today’s media do the exact opposite. They expose what is sordid and violent in order to promote an unwholesome — and even more unrealistic — image of America. How much longer are we going to let them get away with this? When will we start hitting home runs of our own again?

In May there were over 240,000 unique visitors to Counter-Currents. If only a quarter of this number contributed as little as $10 to this site in the numerous possible ways, then Counter-Currents would be that much more able to counteract the racist lies the mainstream media constantly levels at us. This is something we all can do, right now, quickly, and painlessly.

With our civilization in flames and falling more and more under the thumb of the genocidal, nation-killing Left and its black and brown cohorts every day, is there any excuse not to?

Currently, we are unable to take credit card donations except through a site called Entropy. Entropy is a site that collects “paid chat” or “superchat” donations for livestreamers. But they can take donations any time.

Just go to our Entropy page and select “send paid chat.” Entropy allows you to donate any amount from $3 and up.