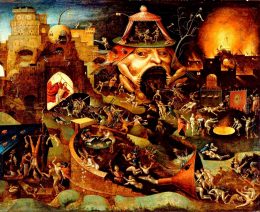 Anonymous, Harrowing of Hell in the Style of Limbo.

It is often said that those who forget their history are doomed to repeat it. As crazy as the looting, violence, and capitulation has been this week, I get the feeling that history is currently repeating itself now. Watching the videos of non-whites assaulting random white people reminds me of the horrors of the Haitian Massacre of 1804. Hearing Black Lives Matter extortionists blame white people for “institutional racism” reminds me of the struggle sessions used by the Red Guard during Mao Zedong’s Cultural Revolution. The only thing that we have not seen before is the extent to which self-hating whites are willing to kneel and grovel before anyone that calls them “racist.” Yet despite the destruction of our cities, monuments, and societies, white advocates must now stand up for ourselves, our families, and our property.

After the Haitian Revolution ended on January 1, 1804, Jean-Jacques Dessalines proclaimed Haiti an independent nation and gave the order to kill all the white French settlers. He suggested that the Haitians should use knives and bayonets to kill the white settlers instead of rifles so the murders could be done more quietly. Moreover, Dessalines did not want the white settlers trying to flee or escape after hearing gunfire.

Dessalines traveled to all the Haitian cities to enforce and encourage the mass killings, which often took place on the streets and town squares. White women and children were also raped and murdered. When Dessalines arrived in Port-Au-Prince on March 18, 1804, the rapes and murders increased. By the end of April 1804, over 5,000 white French settlers had been killed since the massacre began. Dessalines did not even try to hide the massacre from the world. He referred to the mass-killing of white people as a “political necessity.” Dessalines would often brag that the massacre was the defining moment that black Haitians were truly “free.”

The footage I saw this week made me think of the Haiti Massacre of 1804. Just like in Haiti, groups of blacks have been attacking and killing white people all over the US. Whether they were young white men beaten on the streets or elderly white couples being attacked in front of Walgreens, I kept asking myself: why would the police let these attacks happen? This week the riots and lootings spread to Europe. Now the police in London, Paris, and Gothenburg are being attacked by African rioters. If the police and military cannot stop these violent looters and rioters, then more white people are going to get attacked and murdered.

What really made my blood boil was seeing all the white people kneeling and groveling on the ground in the attempt to virtue-signal and gain acceptance from these BLM terrorists. Blacks commit 50 percent of the violent crime, 60 percent of all murders, and 70 percent of all the rapes in the US, but we are told that blacks are still victims of white supremacy and institutional racism. The recent vandalism and destruction of historic monuments and statues are also similar to Mao’s methods of destroying the culture and history of China’s pre-communist past.

The Cultural Revolution was a social-political movement in communist China from 1966 to 1976. The goal was to reestablish Mao’s power and influence after the failures of the Great Leap Forward, which led to over 30 million deaths due to starvation. Mao called on the youth to rebel against the counter-revolutionists through violent class struggle. Many teenagers and college students responded by forming Red Guard groups who worshipped and preached Mao’s collection of quotes, known as The Little Red Book. Mao also encouraged the Red Guards to attack and dismantle the “Four Olds” of Chinese society: old customs, old culture, old habits, and old ideas.

The first things to change were the names of streets and stores, such as Red Guard Road. In the early stages, the Red Guard held protests and marches where they criticized and mocked those who did not support the revolution enough. In the later stages, architecture was destroyed, classic literature and paintings were torn apart, and even temples and cemeteries were vandalized. One such site was the Cemetery of Confucius. The Red Guards also broke into the homes of their enemies and destroyed paintings, books, and furniture. They destroyed these items to erase the customs, culture, and history of the past.

During the Cultural Revolution, millions of Chinese citizens were persecuted, tortured, and murdered in what would be known as “struggle sessions.” Those who were accused of being against the revolution were harassed, beaten, and tortured in public. Many teenagers and college students even went as far as to accuse their own parents of being counter-revolutionists. Those who survived initial persecution were imprisoned, raped, and eventually worked to death. Those who were unable to stand the torture often committed suicide. The Cultural Revolution ended when Mao died in 1976, and it is estimated that the death toll from the revolution could be around 20 million.

Does any of this sound familiar? I have seen far too many videos of blacks lecturing the police about “institutional racism” all while these same protestors end up attacking the police, assaulting white people, and burning our cities to the ground. I have also seen videos of naïve teenagers threatening to get their parents fired from their jobs because their parents said something racist. People have already been fired from their jobs simply for stating that “all lives matter” on their social media accounts. Despite these riots destroying billions of dollars in retail property, many corporations like Apple, Target, and Walmart have shown their support for BLM and these violent protests.

It feels like Western civilization has fallen under the influence of Stockholm Syndrome at a racial level. Stockholm Syndrome has been defined as a condition where a victim develops a psychological bond and alliance with their captors or abusers. The term refers to a 1973 incident where bank robbers took four employees hostage at one of the largest banks in Stockholm, Sweden. The hostages were held captive for six days in one of the bank’s vaults. When the hostages were released, none of them would testify against the bank robbers in court. Instead, they began raising money for the bank robbers.

Altruism may be in our blood and DNA as white people, but our altruism has been weaponized against us to the point of social, cultural, and racial suicide. Blacks and other non-whites are beating, raping, and murdering whites throughout the world, yet a large percentage of white people have been conditioned to sympathize and apologize to our enemies. Enough is enough! This goes beyond a race war. This is the slaughter and massacre of a group that is not allowed to stand up for themselves or protect themselves.

Every day since these riots started, I have seen videos of white people being pulled from their vehicles and assaulted by mobs of Antifa terrorists and violent black people. Each time I see these horrific videos, I keep thinking about what I would do if I were in their situation. If I kept driving, I know that I would be arrested, face an unfair trial, and given a harsh prison sentence just like James Fields. If I obeyed the law and did not try to drive away from the rioters, then I would probably be beaten to death. Yet we know that those rioters would never be arrested or face a day in court. I would be just another number in the black-on-white crime statistics.

I have always disavowed illegal activity, but before you can declare what is illegal, you first need a government that will enforce the laws to prevent or stop illegal activity. The police cannot even protect themselves, let alone protect white people and white families. When white people complain about this or try to defend themselves, they are the ones who get censored, fired from their jobs, and arrested. Now the anti-white mobs are demanding to defund and abolish the police in major cities. Removing or defunding the police will only encourage blacks and other non-whites to commit more crime, as seen in the Ferguson effect in many US cities after 2014.

We as white advocates need to hope for the best but prepare for the worst — and before things get better, I have a feeling that things are going to get worse. The short-term goal is to protect ourselves and our families. A medium-term goal could be to relocate near other people in our community so that we can build and protect our own neighborhoods and businesses. The long-term goals are going to be different for every person depending on their skills, resources, and location. Regardless, any law or government that stops white people from defending themselves, their families, or their property should be considered illegitimate and should not be supported by our tax dollars.

My father used to tell me that it is better to be judged by twelve than carried by six. I would rather die defending myself than kneel to any person, group, or government that is anti-white. White people have survived plagues, massacres, and violent revolutions. But we cannot survive racial suicide. We must stand up for our land, resources, and sovereignty as white people. We must stand up to secure the existence of our people and a future for white children. Never apologize. Never kneel. Never give up hope.

« Speak the Truth or Kiss it All Goodbye