From Destruction to Desolation 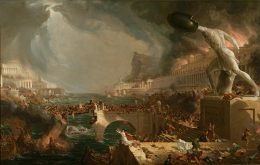 White people need a racial divorce from non-whites. We need to reclaim our freedom of disassociation from non-whites. Any law, policy, or government that stops white people from establishing their own homogenous communities should from here and now be considered illegitimate. There is nothing left to debate, argue, or negotiate. A person is either pro-white or they are anti-white. The choice is theirs. But the decision must be ours to secure the existence of our people and a future for white children. That means having our own white societies.

» The Birds Or: Everything You Always Wanted to Know About Coronavirus (But Were Afraid to Ask Hitchcock & Heidegger), Part Four