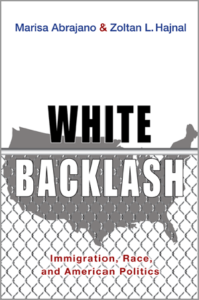 In the act of reading race-related studies by Leftist social scientists, it can be hard to stomach their dégagé anti-whiteness. Jared Taylor, for example, in his review of a 2015 book, White Backlash, by Marisa Abrajano and Zoltan Hajnal [1], makes no attempt to disguise his contempt for the authors. While I certainly sympathize with Mr. Taylor, one must not let the authors’ obnoxious anti-white bias distract him from the utterly good news reported in this book. Political scientists often marvel at the strength of party affiliation (so strong is the typical citizen’s party affiliation, it is considered in the discipline of political science to be a fundamental part of the citizen’s personal identity). And so it is indeed remarkable that Abrajano and Hajnal find that Latino immigration (not just immigration — Latino immigration!) has caused whites to be more conservative ideologically and to be more prone to identify as Republicans. As part of their theory, they explicitly acknowledge that American demographics are changing, and that whites notice this change. They argue — perhaps naively, perhaps insidiously – that whites’ opposition to immigration is “surprising”:

From a Dissident perspective, this is interesting. Let us say that “the best social science data” are right to “suggest that the net impact of immigration is generally a positive one for most Americans.” As can be inferred from the cited passage, Abrajano and Hajnal are referring to certain economic costs and benefits: The “overall empirical reality” they are talking about has to do with the alleged material benefits that Latino immigrants provide to white Americans. If it is true that the average white American materially benefits from Latino immigration, yet still opposes it, this is cause for Dissidents to feel euphoric.

One interesting contribution that Abrajano and Hajnal make is the provision of a theory that connects whites’ views on immigration and their views on other seemingly unrelated issues. The logic is that whites view Latinos as competitors for resources, and so their views on immigration will be related to their opinions about such things as how generous the government should be in the provision of welfare. Even though Dissidents rightly complain that the Republicans are frauds on immigration, in 2016, Donald Trump nevertheless proved that Abrajano and Hajnal were correct to label the Republican Party the party of opposition to immigration; they argue as part of their theory that the difference between the two parties on immigration has become “increasingly clear” to voters. Moreover, given the “growing Latino support of the Democratic Party, there is little doubt that party images have changed in recent decades” (p. 44). It may be easy for Dissidents to overlook the political and social significance of this argument, in part because it is so obvious. But what they are theorizing is that the “image” of the Republican Party is that it is the white party, while that of the Democratic Party is that it is the nonwhite party — and whites are responding to this change in image by becoming Republicans, in spite of the fact that changing one’s party identification at times seems as dramatic as going through a sex change.

Abrajano and Hajnal’s argument, therefore, is that whites are racist: They are racist because immigration is materially/economically good for whites, but their stereotyping of Latinos blinds them to the ways in which Latinos make life materially/economically better for them. This is an obnoxious argument (and, as I will argue later, the authors fail to demonstrate that immigration is actually materially/economically good for whites). But imagine if this were true — imagine if it were true that whites’ ethnocentrism actually did cause them to be blind to the material/economic benefits of living in a multiracial society. Is that not music to the ears of a Dissident?

But I should not oversimplify Abrajano and Hajnal’s argument. They believe that whites are racist, but they blame two things for whites’ racism that make ordinary white people less personally responsible: The “immigrant context” (e.g., “size of the out-group or rate at which the out-group is growing” [p. 48]) and the media. A run-of-the-mill paleoconservative would argue that fast-changing demographics can stoke an anti-out-group bias — Tucker Carlson has made this very argument on his show — so this, in itself, is not exactly an “anti-white” argument. It is easy to laugh at blaming the media as a cause of white racism, but I would argue that we should not be too quick to dismiss it. Like the blind squirrel or the broken clock, the media do get things right sometimes. A 2000 study by Franklin Gilliam and Shanto Iyengar found in an experiment that coverage of violent crime by local TV news can cause an increase in whites’ “symbolic racism.” [1] [2] Some may immediately object that this is because blacks commit more violent crime — and I would agree with this objection. But consider this: Gilliam and Iyengar found that even TV news reports of violent white attackers caused white viewers in this experiment to exhibit an increase in measures of symbolic racism. In reporting these findings, I am not saying that whites are irrational; it makes sense that if violence is positively correlated with blackness relative to whiteness, people are “rational” (in the economic sense of the word) to think “black” when they hear “violence.” Insofar as the media report on relevant and real news, it is reasonable to think that whites will respond to this reporting in a way that the Left characterizes as “racist.” Abrajano, Hajnal, Gilliam, and Iyengar are the types of Leftists who believe, basically, that the media should not report truthfully on racial issues, lest whites react rationally.

In their fifth chapter, Abrajano and Hajnal operationalize media coverage of immigration using a New York Times index (which is a typical way of operationalizing media coverage in the American social sciences). Using data from 1980 to 2011, their media coverage variables are operationalized so as to account for immigration articles’ “tone,” what racial group is covered, and the articles’ “issue content” (e.g., immigration in the context of the economy). They also included statistical controls for other media or media-related variables, such as “volume of coverage.” First, they were able to statistically demonstrate the media’s ability to influence the populace (a fact which I always find interesting and important to emphasize). However, they show that the tone of immigration articles did not affect white macropartisanship. In other words, articles that “positively,” “negatively,” or “neutrally” covered immigration were all ineffectual in influencing white macropartisanship. The immigration articles’ “issue content” was also ineffectual in influencing white macropartisanship, indicating that, at least when it comes to the question of whether a white person identifies as a Democrat or a Republican, he does not distinguish between immigration’s relationship with one issue and its relationship with another issue. However, they found that articles about Latinos caused whites to identify as Republicans. In other words, when the media indicate that Latinos are the immigrants, white people respond by becoming more Republican. This is obviously the reason the media suppress information about race so often in articles when they have reason to believe that there will be a “white backlash” to such information. As per Abrajano and Hajnal, when the media do suppress racial information, it is likely that they are having real effects on public opinion/behavior. The good news, however, is that this chapter provides evidence of white ethnocentrism.

If Abrajano and Hajnal’s fourth chapter had been titled by a Dissident, it would be called Latinos Cause Whites to Be Based and Red-Pilled. If ever there was a group of whites who came to act increasingly “based and red-pilled” (broadly speaking), it would apparently be whites who live in states whose populations are heavily Hispanic. Although Mr. Carlson’s argument that demographic change can cause an anti-out-group reaction makes sense, Abrajano and Hajnal find that this is not true at the state level: “White Americans may be somewhat responsive to the growth of the immigrant population, yet they are clearly influenced by the overall size of the Latino population.” (p. 147)

According to Abrajano and Hajnal, how do whites defend their interests — i.e., in what policy-specific ways do whites living in relatively Latino states act “based and red-pilled”? This question is partially answered in their sixth chapter. This chapter also shows that there is real competition between whites and Latinos in terms of public policy outcomes. One of the policy issues that they look at is taxation. Sales taxes, of course, are known as regressive taxes because they apply to everyone equally regardless of his level of wealth. Property taxes, on the other hand, are progressive taxes, since those with more wealth have more property. Since whites are on average wealthier than Latinos, it makes sense that whites in states with more Latinos would prefer lower property taxes and higher sales taxes, and that whites in states with fewer Latinos would prefer relatively higher property taxes and relatively lower sales taxes. Abrajano and Hajnal confirm this hypothesis, finding that as a state’s percent-Hispanic increases, property taxes fall and sales taxes climb. Back in their fourth chapter, they stated:

Again, if this is true, it is good if one considers the fact that it can be interpreted as evidence of white ethnocentrism. However, as they show in their sixth chapter, after the average state’s population of Latinos became high enough relative to the white population, the state’s revenue-collection policies switched back from regressive to progressive. So it seems that whites and Latinos are indeed in competition with each other to control public policy. In fact, Abrajano and Hajnal actually admit that “Latinos. . . are able to shift policy in a pro-Latino direction if their numbers are large enough.” (p. 200) On the same page, they also admitted that “the decision to reduce education funding and increase corrections funding in states with a large Latino community may exacerbate the problem [of racial inequality] even further.” But wait — if whites are objectively better off with more Latinos and if their perception of a “Latino economic threat” is irrational, then how can there be “pro-Latino” policies? Would the policies not also be pro-white? If Latinos benefit more than whites do from high spending on education, does this not suggest that Latinos consume more public resources than whites do? Does it not suggest that Latinos may change the nature of a formerly white society — from a society where high spending on public education buys really good public schools, to a society where high spending on public education buys something less than really good public schools?

White Backlash is generally encouraging. The future is clearly not unfolding as the Left wants it to. Not only is race becoming more of a central variable in the American social and political scene, but whites appear to be willing to act in their own interests, albeit covertly and indirectly for now. But at this rate, “Republican” will simply be another word for “white,” and “Democrat” will be another word for “nonwhite.”