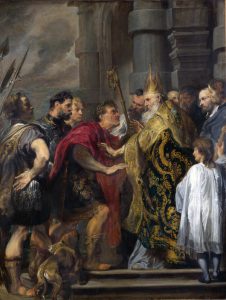 Many people today would describe themselves as being more spiritual than religious. Despite being baptized in two Christian churches, I consider myself a spiritual person of folkish, ancestral faith. Regardless of religion, ethnic nationalists and white advocates stand in opposition to the all-encompassing theocracy of anti-white liberalism. Due to our beliefs, we are modern-day heretics. From classical antiquity to the Modern era, heretics and dissidents have been persecuted in a similar pattern. Nevertheless, I believe that faith can help us overcome the persecution that white people face in Western societies.

Pagan persecution under Theodosius began in 381 while he was emperor of the Eastern Roman Empire. Theodosius restored Constantine’s ban on certain practices of the Roman religion. Theodosius also limited the rights of pagans to meet and congregate in public. When pagan temples started to get vandalized, he made few efforts to find or punish the perpetrators.

Between 389 and 392 he implemented the Theodosian Decrees. These decrees removed non-Christians from various political offices and banned all pagan holidays. During this period, Theodosius started closing pagan temples, confiscating temple property, and banning priests and priestesses from practicing religious rites.

In 393 Theodosius issued a comprehensive law that banned all pagan symbols in public. Many people that were accused of continuing pagan customs or celebrations were arrested. During this time Theodosius is likely to have discontinued the ancient Olympic games, as many of the games had non-Christian traditions and customs.

Theodosius died in 395. His elder son Arcadius inherited the Eastern Roman Empire and his younger son inherited the Western Roman Empire. Both rulers had to deal with invasions, civil war, and economic decline. Some historians attribute these problems to the increasing religious persecution that Theodosius implemented during his reign. One such historian is Zosimus, a Greek historian that lived in Constantinople during the reign of Theodosius. Zosimus recorded these events in Historia Nova. In this account, Zosimus noted that the persecution of pagans under Theodosius occurred in gradual steps of demoralization, destabilization, and usurpation of political power.

Throughout history, competing kingdoms and empires have fought over land, resources, and sovereignty. The victors usually killed the men, raped the women, and sold the children into slavery. The victors also imposed their religion and culture onto the lands and people they conquered.

This is what has been happening to white societies around the world. Instead of foreign hordes invading our countries through warfare, our governments have imported millions of African and Middle Eastern immigrants without our consent or approval. And just like the invaders of history, these non-whites are killing white men, raping white women, and forcing young white girls into prostitution. Yet the media covers up these atrocities and our governments often punish the people who report these crimes. I often ask myself how white people ever got into this situation in the first place. Then I remember the interviews that Yuri Bezmenov did in the 1980s.

Bezmenov worked with the KGB in spreading propaganda through various news agencies in the Soviet Union. He defected to Canada in 1970 and spent the rest of his life explaining the propaganda and subversion tactics used in the Soviet Union. His interviews and lectures on these subjects are often removed and deleted by YouTube. Nevertheless, Bezmenov is best known for describing the four stages of subversion.

The first stage is demoralization. During this stage, the identity and morality of the country are put into question, creating doubt in the minds of the people. Manipulation of the media and academia with concepts of “white privilege” and “institutional racism” are some examples. In this stage, peer pressure and social stigma are more influential than facts and reason.

The second step is destabilization. Destabilization occurs during the gradual changes in culture, society, and demographics. A major goal here is to impose an ideology that permeates society and the lives of its citizens. Entitlements and benefits are also promised to a small part of the population in exchange for their support and enforcement of that ideology.

The third step is crisis, and involves a change or usurpation of power. This is where an unprecedented event divides the country and creates panic among its citizens. Recent examples include the Black Lives Matter movement, the refugee crisis of 2015, and the COVID-19 pandemic. The people in power take advantage of these incidents to circumvent the law and obtain more authority and power.

The fourth and final step is normalization. This stage is where the population finally accepts the imposed propaganda and begins to assimilate it as their own beliefs and morals. It seems that many Western countries are currently at this stage. Most white people have been indoctrinated their whole lives with anti-white propaganda in our schools, media, and governments. Yet when a few individuals dare to speak up or question the anti-white narratives, they are shamed, censored, or arrested. For many people in our community, our situation seems hopeless.

When asked how a culture or society can overcome its propaganda and subversion, Bezmenov’s answer was “faith.” Faith can be a great tool to fight anti-white propaganda, persecution, and subversion. However, I do not think it can be the type of faith that we normally put into our religions, governments, or economies. If anything, it should be a faith that we put in ourselves, our people, and our race.

I am really impressed with the amazing work our community is doing on social media. Every day I see people in our community reporting on all the violent crimes committed against white people that the media tries to cover up. These photos and videos are difficult to look at, but it is important that these crimes and atrocities are not silenced and forgotten. Various social media accounts might get censored or deleted, but they cannot censor all of us. I have hope and faith that the dissident right will continue to spread awareness of the violent crimes committed against white people.

One such crime was the murder of Tommie Lindh. Lindh was a 19-year-old Swede who was stabbed to death by a non-white refugee. Apparently, Lindh was at a party where the refugee was intimidating a young female. Attempting to protect the woman, Lindh was stabbed numerous times by the refugee and later died at the hospital. Our community continued to report this tragedy on social media despite media slander and lies about the incident. I have hope and faith that Lindh will not be forgotten and will be remembered as a hero who stood up to protect his land and his people.

Another person who recently passed away was Simon Harris. Harris was a well-respected musician, content creator, and activist. He had recently appeared on a few YouTube shows and that was when I first discovered him. He talked about the importance of ethnic sovereignty and his experience in the nationalist scene over the years. What I found most inspiring was how Harris was able to share his views with his adult daughter. He explained on the show that he was able to share his views with her by focusing on what makes our people unique and what makes our culture worth preserving. I never met him in person, but he seemed like the guy you wish you knew for years. I have hope and faith that his memory inspires all of us to celebrate a positive white identity with our future children.

Spirituality is part of the European spirit. It is in our nature to find our place in the world, a purpose in our lives, and to have hope for the future. Whether you are Christian, pagan, or agnostic, I hope you can find faith in securing the existence of our people and a future for white children. That is why I thank the gods every night before I go to bed. I thank them for everything I have and for surviving another day. I thank them for having the opportunity to be in the white-positive community. I ask them to grant me another day to help my people stand up for our lands, resources, and sovereignty. As a modern-day heretic, I have faith in our people.

I have faith in you.