The Counter-Currents 2020 Fundraiser: No Fire Can Burn Without Setting a Spark 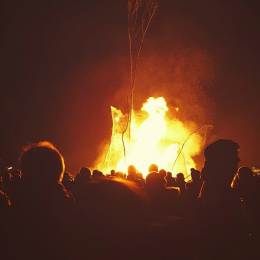 There is a war on, and we are losing.

As I drive through my beloved rural Dixieland country, I see home after home flying the flag of President Donald Trump. I see the devotion with which white Christian conservatives, the rank-and-file of the Republican Party, those whom we must win to our cause, revere President Trump. He won our votes in 2016 by making himself the avatar of white identity, and most of us foolishly believed him. His utter waste of political capital on tax cuts for the ruling class which perpetuates our dispossession, his surrounding himself with the Jewish neoconservatives and Republican ethnomasochists whom he had just defeated, his disgusting Negrophilic pandering, his status as the greatest President that Israel has ever had, and his unwillingness to follow his politically incorrect tweets with the necessary action have all pushed us away from him.

The final straw for me, however, is his downright despicable treatment of the patriot Jeff Sessions, running to reclaim the Senate seat that he surrendered in order to serve as President Trump’s Attorney General. This is the same seat in whose 2017 special election the President and the Party abandoned the former Chief Justice of the Alabama Supreme Court, Roy Moore, over fabricated pedophilia claims. Sessions surely should not have recused himself from the criminally fraudulent “Russian interference” investigation, but then again, the President should have made better use of Sessions elsewhere in his Administration.

The President has shown his true colors in this debacle more than in any other, endorsing Sessions’ opponent, Tommy Tuberville, yet another Republican traitor who opposes every key piece of the America First agenda; Sessions, by contrast, was an immigration patriot for many years before the appearance of Donald Trump. The President has thus chosen, once again, his own petty, egoistic vendettas over the interests of our nation, our people, and our civilization.

The “war” between the President and the “Swamp” that has now devoured his Administration was never anything any deeper than the level of personal revenge for Donald Trump. Indeed, I believe his whole idea to run for the Presidency was initiated in 2011, when President Barack Hussein Obama ridiculed him at the White House Correspondents’ Dinner. So, when I see those Trump flags waving in the yards of my neighbors’ homes, I am sickened. It is such a tragedy that these people, these men and women who should be our allies, have allowed themselves to be so deluded in their desperation for salvation. During his campaign, Trump famously said, “I could stand in the middle of Fifth Avenue and shoot somebody and I wouldn’t lose voters.” He was exactly correct; his supporters truly believe that he is our last, best hope for survival.

In reality, the Republican Party, which exists solely to strangle in the cradle any nascent American Right, must be destroyed if we are to survive.

If one visits the comments section on any Breitbart article, he will see that those who criticize the President from the real Right are called Leftist “Never Trumpers,” smeared as traitors to their country. For Trump devotees, the President is white America, our savior. What a joke this is, and yet we cannot laugh. The Trump Administration has bred a fatal sense of complacency in those quarters of the country that we need most urgently to awaken. We are not #winning. We are losing, and losing badly.

Clearly, our people, more and more each day, are looking for salvation. Privately, more people are willing to utter racial heresies than in the recent past, though we obviously have enormous work to be done to return to the freedoms of decades past.

Our task, then, is to offer our people something better.

We cannot even begin to attempt to do that, however, in our current state. We face more repression than ever before, and it will undoubtedly get much, much worse. Without debating the merits or demerits of accelerationism, we must acknowledge that it really doesn’t matter all that much whether President Trump or former Vice President Biden, or, more precisely, the ventriloquists pulling the broken and senile shell of a man’s strings, wins this year. Either way, we are heading into the mouth of Hell. Remember that it is under the Trump Administration that we hold hearings on “white supremacy” rather than black crime; perhaps the only difference between our two “choices” is the timeframe of our deaths, and that under a Republican Administration, censorship will be carried out by the private corporatocracy, while a Leftist Administration will do the dirty work itself.

We are outgunned. Our side, the real Right, has little financial resources relative to the seemingly unlimited wealth of our bipartisan Enemy. We must rely on one another to weather the coming storms, and indeed to fight those storms, but we cannot do that unless we can physically organize. We cannot physically organize without the communication networks necessary to do so, and we cannot communicate without the few remaining bastions of freedom that we still retain.

As the last ramparts fall, one by one, how can we ever mount a real opposition if we do not even have online spaces like Counter-Currents?

Though we may sometimes be dismissed as grandiloquent, it is no overstatement that we are currently engaged in a struggle for our lives, for our children’s lives, for the future of our race and our civilization; hell, we are engaged in a struggle to prevent our past from being erased and overwritten. Can we not scrape together more than a pittance? No one will do this for us; the task, the duty, is ours alone. Every little bit helps; our numbers grow with each time a Counter-Currents article is shared with a friend or a relative, with each time that we take the ideas that we are exposed to here and spread them into the world.

Please, brethren, I implore you to donate whatever amount you can, whenever you can, for Counter-Currents is staring two shotgun barrels in the face. Without your support, we will vanish, and with us one of the last brilliant lights of liberty in this country, on this planet. The fire is ours to keep, for once it dies it will never return.

Keep in mind the last words of that masterpiece, Se7en:

“Ernest Hemingway once wrote, ‘The world is a fine place and worth fighting for.’ I agree with the second part.”

Other Ways You Can Help:

If your bank does free money transfers to other banks in the US, please contact Greg Johnson, Editor-in-Chief, at [email protected].