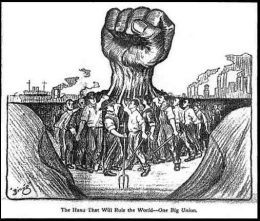 Leaked documents from Amazon [1] depict a “heat map” of Whole Foods stores at risk of unionization. One of the determining factors was a given store’s ethnic diversity. The more diverse a store is, the less likely it is to unionize, according to the metric used.

Of course, this makes sense to anyone with their head on their shoulders about the realities of race. Organizing of any kind requires that the proposed group have a lot in common; common interests, values, experiences, and behaviors. This is true for every organization, and it scales up to societies and governments, as well. A person’s race changes their viewpoints and values, and even if you don’t believe in a biological basis for race, it would be difficult to argue that there exist no sociological differences between identifiable races.

Amazon’s methodology raises a few interesting points. Many on the Left were quick to attack Amazon on the tired charge of racism, both because Amazon acknowledged that race exists (a no-go for many) and because Amazon states that they funnel greater “resources” into stores at high unionization risk; thus privileging the less-diverse, higher-risk stores with these nebulous “resources” that are denied to more diverse stores. Some on the Right found the story to be equal parts amusing and heartening; Amazon is based and redpilled for even collecting pertinent data on ethnicity in the stores, and for utilizing it in making corporate decisions. Others, like Business Insider, who broke the documents, barely gave the mention of ethnic diversity a passing sentence, preferring to focus on the economics of trust-busting instead. The whole thing feels swept under the rug.

The implications of this data go much further than these talking points, though. It couldn’t be any more timely to talk about the curious relationship between race and labor, either, given that today is May Day. There is the accidental, and obvious, admission by Amazon that diversity is an impediment to cohesion. Amazon’s data is also a rare warning from a large corporation about just how much they know, and just how much they’re willing to do. Finally, there is the question of what data like this means for those who consider themselves National Socialists or “Third Positionists” of any stripe.

Let’s begin with the obvious: by correlating stability negatively with ethnic diversity, Amazon is admitting a fundamental truth. It is difficult, or nearly impossible, for you to make any sort of headway on organizing with people who do not share your values and may not even speak your language. In the instance of labor organization, there are other factors at play, too.

For one, ethnic minorities are less inclined to view their struggles at work through the lens of class. They are allowed, and often encouraged, to engage in identity politics. You would be hard-pressed to get a black coworker of yours to agree that you share in a struggle of some kind, a simple prerequisite to unionization. If members of a prospective union all feel different levels and kinds of victimization — or, in extreme cases, blame other members of the proposed union for their problems — such a body won’t last for long.

Effective labor organizations are also predicated upon their members generally feeling fraternity for one another; the best unions are built not just upon solidarity, but in workers belonging to a union actually knowing each other and liking each other. This is crucial in ensuring members are ready and willing to participate in collective action, as they are not forced to make a choice between surrounding themselves with people they like, or securing a better workforce. We know that people of different ethnicities are broadly segregated in the labor force [2], both by industry and by their role in the same workplace. Whether this is due to external factors or personal preference — though I would hazard the latter is of vital importance — is ultimately irrelevant, as the mere existence of this divide is enough to inhibit the familiarity necessary to a solid union spine.

Amazon knows all of this. That is why they collect the data and use it in the first place. But this is certainly not cause celebré. Plenty of institutions are aware of the chaotic externalities brought about by diversity, but view these things as means to an end. Amazon has a pretty strong incentive for them to prevent unionization from occurring, and it just so happens the homogeneity — with all its benefits to us — threatens their labor practices and therefore their bottom line. An Amazon executive might know that diversity makes life miserable for his employees, but he’d much rather use this information to funnel Indians into a shop full of charmingly idealistic white kids to crush their morale than he would to improve their circumstances.

The people who call the shots at Amazon are also not in positions where they worry about race. In fact, a deracinated society may be ideal for them, as it means that personal identity can be more easily supplanted by consumerism. The people up top are largely able to escape the consequences of their policies by using their wealth to flee to gated neighborhoods and high societies.

Sounds like as good a reason as any to guillotine the bastards, right?

You wouldn’t be alone in thinking this. Many on the Right have been agitating for action against plutocrats for some time now, and some have even begun to advocate for class politics to take precedent — momentarily — over race politics, believing that the nation’s plutocrats are the chief enemy of the ethnostate. A sort of Red-Brown Alliance [4], if you will.

This sounds mostly correct on the surface. The elites stand to benefit from demographic shift, because such a thing helps create more passive consumers. They have the information they need to identify where, who, and what is lacking in diversity, as evidenced by Amazon’s heatmap and countless other tools used to study demographics. And, they have the power to make it happen, whether that’s in the form of replacing their employees with H1-B hires or busting their unions with a busload of Mexicans (maybe they broke the picket line because they just couldn’t read the signs). Remove the Fat Cat, and suddenly, all of these misaligned incentives and malicious actions vanish, as well. You also get socialism, or at least something like it, as a bonus. Secure the bag!

Such a fantasy sounds nice, but unfortunately, a NazBol rebellion remains just that. There are several problems with allowing class to take precedent over race.

The first issue is that a class-based approach opens you up to weakness from multiple sides. In a multicultural society, shifting your attention towards the plutocrats leaves you open to attack from those engaging in identity politics, often against you. Class-based political organization is also dependent upon class-consciousness transcending racial lines. Even if people of different races choose to work with you, which is unlikely itself, there is now a component of your movement with interests and goals that are likely different from yours. Reconciling these is often impossible, which means that you will eventually part ways as a matter of course.

Also, it is not in spite of, but because of the fact that the elite use racial diversity as a tool to make class politics a challenge, the question of race must be solved before the question of class can be. You can put your efforts into instituting a Glorious Dictatorship of the Proletariat all you would like, but the folks in charge can disarm you with a strategic infusion of Africans. Take away race, and the upper class has lost one of the most impactful means by which they can manipulate societies. Such an undertaking is also one possible via metapolitical efforts, whereas any implementation of class-based ideology is inevitably political. You can spread racial consciousness throughout your day-to-day life and see it positively impact the society you live in, but organizing to lop the head off of your landlords requires much more direct action.

There is an unmistakable appeal to class politics. For many, it can act as a euphemism for white identity politics, especially when those who stand to be harmed the most by a strong working-class body are often either Jews or multicultural advocates. For others, it’s cathartic. I know that I would get a kick out of seeing the man who laid off my father during a recession get tarred and feathered. For others, still, it is simply about justice.

These are laudable and valid reasons to support economic change, but allowing class to lead over race is putting the cart before the horse. Amazon exploits racial divides to prevent organizational action because these divides exist. An alliance with people who claim that they do not — like the Left — would be one that is counterproductive and potentially damaging to our cause, as people hostile to our interests will be given a seat at the table once power is redistributed.

The aims of the New Right are not incongruous with those of organized labor and radical economic policy, but to believe that the aims of the former can be achieved through the means of the latter is disingenuous at best and harmful at worst. It is true that the rich and powerful exploit diversity to harm us. But this tells also tells us that by striving for homogeneity, we can undermine them. Without explicit ethnonationalism, we shall remain weak and vulnerable to the same methods that have been used to oppress us for decades.

This May Day, I call for the white workers of the world to unite — with other whites. The only thing we have to lose is our same-day shipping.