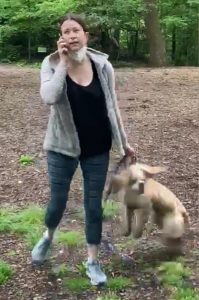 Audio version: To listen in a player, click here [1]. To download the mp3, right-click here [1] and choose “save link as” or “save target as.”

The internet can’t stop hating on Karens. These middle-aged white women continue to cause problems for America and are hated by both the Left and the Right. The Left claims they’re white women who weaponize their privilege to oppress minorities. The Right ignores the racial angle and says they’re just annoying tattle-tales. According to conservatives, any race can be a Karen!

The Karen meme’s popularity among dorky liberals and boomer conservatives has rendered it a dead meme. If your mom is posting about Karens on Facebook, it’s no longer funny.

It would be one thing if it was just an unfunny joke, but it’s not. The Karen meme explicitly demonizes whites for simply giving a shit.

If you demand to know why the homeless loiter around your neighborhood, you’re a Karen.

If you ask POC to turn down their music, you’re a Karen.

If you call the cops on suspicious blacks, you’re a Karen.

If you notice anything you’re supposed to ignore, you’re a Karen.

How can one not be a Karen? Just look the other way and mind your own business. Adopt the attitude that allows your community to decline and crime to run rampant. Just focus on yourself and your own business. You don’t want to become woke Twitter’s new villain and lose everything.

New York resident Amy Cooper learned that lesson this week [2]. She got into a dispute with a black birdwatcher (they apparently exist) in Central Park. Things escalated when the black man allegedly threatened her dog. Cooper then called the cops on the black man. That act, which was caught on video, ruined Cooper’s life. Now she’s jobless and the most hated person on the internet.

Just because she called the cops on a black guy.

“Central Park Karen” is likely a liberal who believes that diversity is our strength. She may even think that white racists are a greater threat than blacks. But her hypothetical liberal views didn’t save her from the internet lynch mob.

Some on our side may say: “She got what she deserved!” They may relish the Schadenfreude of an AWFL (affluent, white, female, liberal — a different creature from Karen) tasting the bitter fruits of wokeness. But these celebrants miss the larger picture. Cooper isn’t being punished for being a goofy white liberal; she’s ruined for calling the cops on a non-white. This is considered the worst thing that a white person could ever do and merits extreme social shaming. The main takeaway from Central Park Karen isn’t an AWFL getting hoisted on her petard — it’s that whites should never call the cops on non-whites.

Any person with functioning common sense would know black men are far more dangerous than pushy white women. But our opinion-makers, unfortunately, lack that basic quality. It explains why there is far greater news coverage of the Central Park Karen than that of the black man who beat an elderly white man [5] in a Michigan nursing home. That black man is just misguided, and his crime is just part and parcel of living in a diverse society. The injustice of Karens is something we cannot tolerate in a diverse society. Whites need to know their place and not cause offense to our wonderful minorities. Whites having a problem with non-white behavior is a sign of racism, which is the worst sin imaginable. Whites must feel discomfort at the thought of calling the police on non-whites. At the same time, they need to accept that their grandfather may be beaten to a pulp in a nursing home. That’s just a fact of life.

There is a particular type of white woman that deserves criticism: AWFLs [6], unlike Karens, actually have power in our society and fully believe in the racial justice bullshit. They focus more on their careers and their own “empowerment” than creating a family and protecting their community. The typical Karen is a suburban housewife who’s a little too eager to make sure every lawn in the neighborhood is properly cut. The typical AWFL aspires to power so she can outlaw hate speech and welcome more immigrants. The AWFL threatens our society; the Karen is merely annoying.

Some on our side do see Karens as a problem though.

Karen is not a last stand for a nice, white country. Karen is a last stand for the status quo she grew accustomed to in the last several decades, a world in which her entitlement went unchecked and the underclass she could boss around didn’t talk back,” Bakewell writes. “The Karen archetype doesn’t have much of an identity, if any, beyond herself. She will harass white teenagers and Mexican fast-food workers with equal zeal. A Karen is merely a blandly conservative AWFL — they differ solely in the types of people that they love to complain about to the authorities.

He then goes on to lambast Karens for caring too much for consumer goods and failing to care about the “struggle.” He says we should destroy everything Karens care about and these women are “irreparably damaged by the trappings of modernity.”

The same could be said about all women. Women are not revolutionaries, and they desire security. Karen moms want their kids to grow up in a nice area, not subject to privation. Karens are overemphasizing protective behaviors found in the ideal mom. Nearly all whites suffer from the same materialist concerns and troubles. We shouldn’t hate the Karen for wanting good customer service and a clean neighborhood. It’s also an unwise pitch to explicitly say we will significantly reduce the quality of life for whites. Why would ordinary whites join our cause if their lives will just get immeasurably worse? They would rather stick to their normie suburban ways.

Karens are not the agents that lead to mass immigration and globalization. They may benefit from some of those effects, but that doesn’t make them our enemies. Most of these women don’t know any better. It certainly doesn’t help our cause by joining with our enemies because Karens may have once hired a Hispanic lawn mower.

The Karen probably knows nothing about demographic change or the 1965 Immigration Act. But she does recognize a problem in her community and isn’t afraid to call it out. For that trait alone, she is worthy of praise.