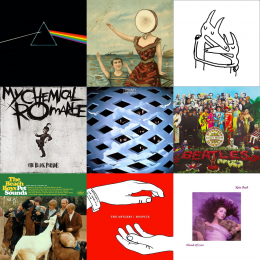 Trahndorff-by-way-of-Wagner’s concept, Gesamtkunstwerk, refers to a work of art that incorporates all of art’s mediums in its final incarnation. The word in German literally means “altogether artwork.” Wagner’s later operas are often cited as approaching the realization of this ideal, and modern cinema is often evaluated upon this concept or used as a barometer for it.

Discussed less often, however, is the “concept album.”

The term “concept album” inevitably provokes discussion itself. What is a concept album? Aren’t all records with some degree of cohesion arguably unified by “concept?” Couldn’t any middling hipster with a Jazzmaster decide to call his embarrassing solo effort a “concept album?” Is Ram Ranch a concept album? I will admit I do not have the answers to all of these questions, but for the purpose of this article, a concept album will be defined by these qualities:

By this definition, all of the classic records can be included: The Dark Side of the Moon, Tommy, Sergeant Pepper’s, as well as more recent incarnations of the medium. These traits are inherent to the “concept album” label, but do not quite capture the completeness inherent in the Gesamtkunstwerk. The concept album’s relation to the Gesamtkunstwerk lies on the specific musical, visual, and dramatic forms that they take in relation to the listener and their interpretation of the album.

The completeness of a film or opera is plainly obvious to the audience, as one can immediately perceive that these works tick all the boxes: There is sound, acting, visuals, narratives, subtexts, and more. One can certainly look back upon the film once it has ended, and contemplate its elements retrospectively, but the nature of a film necessarily requires the focus of one’s visual-auditory senses at nearly all times while one is actually watching it. Unless one is fond of particularly slow films, it’s also fair to say that the degree of stimuli a film provides is an order of magnitude greater than that of a still image, or even a song. There’s a lot going on, and you have to be present for all of it.

Contrast this to music. Musical arrangements are often benign enough to one’s consciousness that they’re easily used as background noise; in fact, this may be the primary circumstance in which music is listened to, especially by Westerners listening to commercial pop music. This certainly isn’t a commendable attribute of the modern musical form, but it’s also not one to decry, either; the passivity that songs allow on the part of the listener without any detraction from their understanding of the track means that there are open avenues of contemplation that can be addressed in a musical work. In short, it takes a whole lot less of your active brainpower to understand a musical work than it does to understand a multimedia one. Concept albums take up that remaining space with their narratives and meanings; but rather than divert attention from contemplation, a well-arranged musical work invites it. I hazard that this is the case for two reasons.

For one, music can strike closer to the soul than a multimedia experience can. The conscious and unconscious efforts of the mind to parse information such as plot, dialogue, visual stimuli, and more mean that a multimedia work’s impact is filtered through several different layers of the brain before it reaches a man’s spirit. Even a film’s most emotionally or intellectually moving scenes must pass through man’s higher-order reasoning faculties before it begins to make sense; this is why people who can’t seem to understand interesting films are often dumber than boxes of rocks. Music, on the other hand, is a medium that is perceived with a greater deal of immediacy; for works with lyrics, the only higher-order processing needed to understand them is that of language, which comes to most with great ease. Sounds necessarily shock us awake, soothe us, or otherwise play with our senses on account of their evolutionary role in human history. We react to the pummeling of a kick drum or the shouting of a vocalist the same way we react to bumps in the night or screams from a neighbor.

The other reason is due to the ways in which a good concept album is packaged. Their narratives, and — not to eat my own words — visual content are presented to the listener in a way that allows them to dwell on their contents in real time. Good cover art, good narratives, and melodic arrangements that frequently involve repetition allow the listener to engage on terms innate to our more primal psyche, freeing up our mental faculties to process how we feel about the music as it occurs.

These qualities do not necessarily make a Gesamtkunstwerk, however; they merely make it easier for an artist to create one, and for their audience to understand one. A concept album in its most idealized form touches on all of the points of the Gesamtkunstwerk.

A concept album is full of music. This is the most obvious one.

These albums are also inherently dramatic; their premises invariably revolve around a source of conflict and its resolution (or non-resolution). Pink Floyd ruminated on a person slowly escaping madness in The Dark Side of the Moon, Will Toledo detailed an imagined romance in Twin Fantasy, and Jeff Mangum’s. . .  relationship with his idealized Anne Frank dream-girl comes to a simultaneous end with his real-life relationships on In the Aeroplane Over the Sea. The drama doesn’t end with the plot, however, as the musicians more often than not assume some kind of character or persona for the recording of the work, even if that persona is one loosely based upon or entirely rooted in their own psyche. (I like to call this “method musicianship.”)

Concept albums also have a limited visual element as well; the cover art. These images, while often very simple, are works of art in and of themselves; they often represent themes, sonic textures, and emotions intended to be conveyed by the music of the album. Their simplicity does not detract from their significance, and could arguably even make them better for contemplation, as there’s only one image for a listener to ponder as opposed to a whole reel of them.

The sum of these parts lends the concept album a very real quality of immediateness. I do not mean this in the disparaging sense, suggesting that these works do not require retrospective analysis — they almost always do — but they are far more easily felt in their moment than they are dissected. The concept album is the perfect medium for the complete work of art for this very reason. It is easy enough to detach oneself from other works, like films and stage productions, because they require some dedication of your higher faculties. Sounds, try as you might to resist them, have a tendency to strike bone.

This immediacy is, in fact, the basis for another medium itself; the medium of emotive state.

Consider the notion that the human psyche is, itself, a sort of blank canvas. The art that we observe can have profound impacts upon our mental state, outlook, and creative drive, so much so that works of art were (and are) routinely banned on the basis that they may incite people to behavior considered undesirable. The most common example of this may be bans on literature, historically speaking, but bans on popular music quickly became a common occurence in much of the West, especially during periods of unrest. Finely crafted musical works are not complete works of art without the reaction and engagement of their listeners. Very few mediums are capable of eliciting understanding so universal, and so visceral, as that which music can. Visual art can achieve the same effect to some extent, but expressing one’s feelings about photographs, paintings, or films often requires the use of language that may be a mere approximation of what is truly felt in one’s gut. Contrast this to a coherent musical work; all you have to do to express what a given work makes you feel is to sing or play along.

In this way, an album transcends the medium it came in. It’s not just a complete work in and of itself, but is made even more complete by the participation of those listening. And that is what makes it an example of the Gesamtkunstwerk.