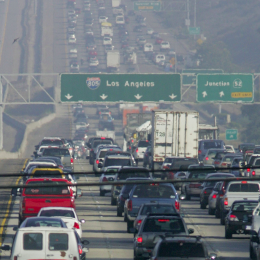 I will preface this by saying that this year, you’re most likely not struck in traffic. We owe a great big “thank you” to the ‘rona for making Earth Day 2020 a rousing success [1]. It’s positively alpine out there!

In normal times, however, it’s highly likely that a majority of you jump into a car in the morning, crawl your way towards a workplace of some kind on a slab of freeway, and then repeat the process in reverse in the evenings. This ritual has been enshrined in the American way of life: the commute. The freedom to move at 2 miles per hour on a sheet of pavement 10 times a week; that’s how we roll in the United States, baby. The vast majority of those who participate in this national pastime think nothing of it, beyond it being how life works. Those with consciousness above the level of an NPC might be able to offer one or two reasons as to why they drive everywhere: maybe it’s because the bus is full of minorities, or it’s too slow, or they live in some soulless suburb that precludes cycling or public transit by virtue of distance or want of infrastructure.

If you ask the average urban planner or transit advocate about the root causes of this, you’ll get an entire earful about white flight, redlining, and income inequality. Truth be told, they’re not entirely wrong in mentioning any of these causes. They are missing one crucial part of the puzzle, though. White people also suffer from the consequences of suburbanization and sprawl. Our natural environment does, too. All told, the externalities of suburbanization, be it air pollution, destroyed neighborhoods, and big-box dystopia affects people of all races that live in a given area. And like many other problems, suburbanization wouldn’t exist if we didn’t try to make different people share the same space.

I would like to suggest that you don’t drive because you want to, you drive because you have to. This applies to almost all white people in the United States. For some, it is theoretically possible to ditch the sedan and jump on the proletariat chariot, but doing so would either double or triple your commute time, or put you at undue risk of harassment, assault, or other aggression from some plainly visible groups. The American suburb is, for the most part, the home of the nation’s whites.

There are numerous reasons why this is the case. The foremost cause of this geographical arrangement is one often cited by the Left when painting the portrait of Evil White People: Affluent white folks fled the blacks that populate the inner city, settling in the suburbs. Well, yes, they did. But that is a perfectly legitimate thing to do. It’s not entirely different from the Chinatowns, Comptons, or Castros that dot the landscape of the average American city. One can hail the diversity of a given metropolitan area all they want, but on the street level, it’s highly likely that things are rather heavily segregated. Suburbanization was, broadly, the same pattern of segregation replicated on a much larger scale, sustained only by post-war prosperity and the relatively higher earning potential of whites — earning potential that these very same suburbs cannibalize.

The initial baby-boom zerg rush of suburban development has long since ended, but American whites continue to be raised in the same, or similar, suburban areas in which their parents were born and raised. It is simply life as we know it. The city center is typically viewed as a place for occasional merrymaking, office jobs, and more than likely, where crime and panhandling mostly occur. It is both what is known and what is preferred.

You can buy Greg Hood’s Waking Up From the American Dream here. [2]

These suburbs, as is well known, are not havens of walkability and sustainable design. A walk about a plot of single-family tract homes will reveal more and more single-family tract homes. To go grocery shopping requires a visit to a giant box floating in a sea of parking. The same thing is done to go to school, work, church, yoga class, or backgammon practice. This is inescapable; the form of the suburb demands the use of an automobile on account of its choke-point road design and extremely low density, which makes any sort of public transit or walkability scheme impossible to maintain. This didn’t occur in a vacuum, as is frequently suggested. Public transit was being gutted in the inner city [3] at the same time the automobile-centric suburb began to spring up; mobility was becoming more difficult for anybody on foot or by mass transit, making the need for an urban form suited to cars visible and desirable. In some cases, this transition was part of a megalomaniac’s master plan more generally; you can thank Robert Moses — a first-generation German-American Jew — for the waterfront-destroying FDR Drive [4] in Manhattan.

The shortest way to describe the American suburb is in one word: unnatural. Its forms and shapes were guided not by centuries of trade, construction, and creative chaos, like the metropolises of Europe and even the American eastern seaboard prior to the 20th century. Rather, they were a slapdash solution to a problem created by a demographic experiment nobody consented to. It is, on a surface level, reasonable to defend the American suburb as a last stand for American whites. But this “solution” has brought us many more problems than it has solved.

As housing spreads further outward, American whites are quickly being dispossessed of their economic productivity, which invariably occurs in the city center. Even the most “blighted” of urban blocks, by virtue of its land value, mixed uses, and density will produce up to 13 times the revenue that a big-box retail outlet would [1] [5] — all while consuming far less, on average, in tax revenue because it doesn’t require a citywide network of freeways to facilitate access to it. That’s tax revenue that the average American white, living in a different, suburban municipality, won’t see a dime of in services, schools, or infrastructure. This isn’t even mentioning the fact that the average suburban tract ends up being a net economic loser; the money generated in property, income, sales, and other taxes is never enough to stay ahead of infrastructure repairs, necessitating either endless growth in the form of new homes or an increase in taxation. [2] [6]

If the municipal fiscal burden wasn’t enough, suburban homeowners or renters are also expected to shoulder the cost of an automobile, its insurance, and its maintenance. The average American spends roughly 13% of their income on transportation costs. [3] [7] Automobile loans also constitute a large chunk of American debt [4] [8] aside from housing, opening up our people to financial predation from the usual suspects.

Fiscal costs are one thing. Keeping with the theme of Earth Day, the environmental costs are even greater. Tailpipe emissions constitute 28% of the United States’ total greenhouse gas pollution, [5] [9] in no small part due to single-occupant car commutes. 1.4 million hectares of land was lost to suburban development between 1990 and 2000, [6] [10] pushing farmland further out, necessitating greater transportation costs (and emissions), and demonstrably impacting the ecology of the regions surrounding a sprawling metropolitan area.

In short, the last-ditch attempt of America’s founding stock to live amongst their own both enables our financial downfall and the destruction of the natural landscapes that only we cherish [11]. Environmental destruction is but one of the countless other social ills caused by ethnic diversity. This seems to escape the average ecologist.

The solution to this pressing environmental and social problem is urbanism. Much like I hazarded that you don’t like driving everywhere, you simply must drive everywhere, I would also like to hazard that you don’t dislike cities qua cities. You dislike the diversity, degeneracy, and deculturation that occurs inside of them. The appeal of a suburb — a quiet, safe place, with room for you, your family, and your garden — is not exclusive to development on the furthest-flung fringes of a city. When our cities are populated only by us, there is both plenty of room to raise your children and grow a garden, and plenty of peace and quiet to be had if you know where to look for it. It doesn’t take massive tower blocks of apartments for a plot of land to break even on its expenditures or ecological impact; simply building houses on narrower roads can be enough to achieve the density needed for a town to thrive. [7] [12] You might even find that a tight-knit community forms, much like they did in Europe before the automobile. But for this living arrangement to be possible, our cities must be populated by our people. To suggest otherwise is a pipe dream that ignores the most basic of human instincts and desires. It is for this reason that environmentalism, in any viable form that it takes, is inescapably nationalistic and racially conscious.

If we must move around less in order to reduce our impact on the planet in the form of emissions, it must be possible to walk for our errands, but we must also never feel the need to run away from our neighbors. The radiant cities of North America and Europe are ours. It is time we take them back, for both ours’ and nature’s sakes, before it is too late.

Please support our work by sending us a credit card donation through Entropy [13] — just click “send paid chat.” Entropy allows you to donate any amount from $3 and up. All Entropy chats will be read and commented upon in the next episode of Counter-Currents Radio, which airs every Friday.