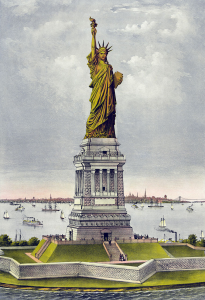 I’ve never set foot on the American continent. I’ve lived in Europe my whole life. I hadn’t even left the Mediterranean basin until I was already a man. As I told one of my American friends who had come to visit, I’ve never had to go forth and see the world because the world always saw fit to come to me. For someone who’s loath to travel, I have an impressive history of drinking Finnish metalheads under the floor, throwing chairs at Polish football hooligans, seducing Russian and Romanian airheads, picking apples in my grandfather’s orchard with the CEO of an Italian automobile producer, collapsing in a drunken heap on top of a heap of drunken Irishmen, falling face-down in the mud of a wetland because an Iraqi challenged me to jump over a creek, helping an Austrian playwright put on a show, kissing a French girl in the shadow of the church of my baptism, carrying a drunk Croat twice my height on my back, regaling drunk working-class Englishmen with tales of throwing chairs at Polish football hooligans, and trussing up a refreshingly sober American writer for Counter-Currents on my back, wrapping him in Macedonia’s ancient flag and carrying him up a flight of stairs.

But I’ve never been to America. It is a strange land, as far as I’m concerned. Her size alone fills me with a sort of dread, that she can never be fully known, like a willful woman who can be briefly had but never possessed. Wistfully, at a distance, I think of that vast continent, spinning fantasy upon fantasy about the great land beyond the ocean. Mother Europe is a small place, where I can hop in my car and be in a different country within the hour, whereas my Texan friends think nothing of commuting for 3-5 hours. Just how big is America? I can look at the figures and maps, but I do not think that I’m mentally prepared for the vastness in space. As I’m fond of saying, the beauty (and monstrosity) of Europe come from vastness in time — men lived here, as I live, many thousands of years ago. But the beauty (and monstrosity) of America come from vastness in space, of land as far as the eye can see and beyond.

That’s to say nothing of America bucking the rule of European man. The teeming Amerindian and mestizo multitude has already beaten down the old Iberian aristocrats who once ruled the continent south of the Rio Grande. Now, this great human, alien mass is streaming into the heart of the USA, securing allies in all of the non-Europeans who’ve been foolishly brought or invited into this garden forged by European man. There is a sense of something dark and inhuman moving under the surface of complacent American suburbia. Something plumed, something serpentine, something which hungers for sacrifice.

For this reason, much though it would improve the sovereignty of European peoples, I cannot fully rejoice at the fall of the American empire. While it would free Europe from Washington’s yoke, it would unleash the monsters of old, pre-Columbian America onto white Americans. I have no ill will for this noble nation, even though they themselves do not explicitly understand that they are a nation, whose fate needn’t be tied to that of the American empire. This is the America not of Jefferson, Lincoln, the Roosevelts, the Kennedys, the Clintons, the Bushes, the Rockefellers, and other criminal clans, but of Andrew Jackson, Robert E. Lee, Madison Grant, Ezra Pound, Robert E. Howard, Huey Long, Pat Buchanan, Richard Marcinko, and Ross Perot — the nation that made the empire possible and was ultimately betrayed by the swamp creatures in Washington. This nation is also yet to be fully formed and differentiated, but it nevertheless is there, waiting to rise up, kick a little ass, sew a flag, drive a big truck, etc.

My great hope in the year 2016 was that Donald Trump would scale back the American empire and retreat the American armed forces back to the homeland, or in the words of Ann Coulter, remove them from the Euphrates and post them on the Rio Grande. This would have been the best-case scenario. It would have freed the nations of Europe to choose sovereignty and nationalism while allowing the American nation to peacefully arise as the empire dissolves its presence abroad. This is still an option, incidentally. If not Donald Trump, then a future president who understands the futility and cost of empire can issue such an order and implement such a policy. However, time is rapidly running out and the US deep state swamp has proven itself remarkably drain-proof. It has even absorbed Donald Trump and integrated him into the mammonist wing of the Molochite-Mammonist duopoly at the helm of the empire.

In my last two articles, I called for a military and diplomatic alliance [2] between the nations of Europe, which would proactively defend Europe’s borders [3] and ensure the survival of European peoples. Such an alliance would necessarily be racial, for it is not our intent to host the nonwhite multitudes of the world within Europe’s borders. However, this still leaves out a sizeable chunk of whites, specifically the European diaspora, or the inhabitants of the so-called European settlements, in the Americas, in South Africa, in Australia, in New Zealand, and elsewhere.

The reality of the situation is that if their countries fall, Americans, Canadians, Australians, New Zealanders, and South Africans would be faced with the choice of either being massacred and/or enslaved by the conquering nonwhites or fleeing, ultimately to Europe. Now, remember what I said about Europe being tiny? The sheer numbers of the white diaspora make the proposal of letting them in a tough one. While I have a soft spot in my heart for America, I shudder at the thought of 200-odd million white Americans pouring into our tiny continent, and that’s not even counting the teeming masses of Canucks, Aussies and Kiwis and their logic-defying accents and cultural practices. One solution, which I’ve heard given before, is that Americans who can trace their ancestry back to particular European nations should return to that nation. In practice, this would mean inflicting the Real Housewives of New Jersey on the Italian Mezzogiorno — a region which I believe has suffered enough, to say nothing of the fact that there are approximately 10 times as many Irish-Americans as there are inhabitants of the Emerald Isle.

Well, why not just turn them away? Leaving aside the obvious moral odiousness of leaving 200 million people to be devoured by the nonwhite hordes, it’d undermine the cohesion and solidarity of a European racially-based alliance. If we can turn away these white people and leave them to their own devices, why couldn’t we leave this one specific European nation out in the cold for whatever reason? If we follow this logic, our grand alliance would soon be in tatters.

Europe should look after her children, uncultured and ungrateful though they may be, lest our nations are inundated with people who munch hamburgers two at the time, think football is played by throwing an egg around a rugby pitch, and well. . . you know the stereotypes. This means providing military assistance for the European diaspora in the event that their lands are threatened. The American, Canadian, Quebecois, Australian, Novozealandian, Argentinian, Brazilian, Afrikaner, and other white nations or nations-in-waiting will have to be supported, and Europe might even find herself forced to construct ethnostates for them, lest they be either massacred or found knocking on the door of the old continent. And make no mistake, every European settlement is under threat. Even distant Australia and New Zealand risk falling prey to Chinese legal replacement migration. In some nations, the support will be less dramatic; merely a promise from Europe to dispatch Euromarines in the defense of these lands. In others, it will consist of perhaps rebuilding troubled settler states from scratch. Something of the latter sort is liable to happen in the North American continent, where the USA and Canada seem not to be the most stable of entities. Entirely new solutions will have to be reached for Latin America, whether creating ethnically homogenous exclaves for that region’s white populations (with each allowed to set its own castizo tolerance levels and policy), or evacuating them to defensible locations, probably in S. America’s southern cone where the majority of Latin America’s whites live.

In these ventures, Europe mustn’t act as a conqueror or nation-builder. Knocking out the Washington hegemony is meaningless if we replace it with another one straddling the Mediterranean. Rather, the European diaspora of these nations will build their own nations, and avail themselves of European military and diplomatic might if and when the need arises, under conditions of reciprocity. The guiding goal should be maximum independence and sovereignty for both the nations of Europe and the various European overseas settlements and mutual assistance for the attainment of these goals. If one neighbor helps another, the other one is in his debt, but does not become his slave.

One of our writers here for Counter-Currents came to visit me recently. As I mentioned before, I don’t have to go out and see the world: the world comes to see me. He’s an American, but he assured me that he has no loyalty to America, and that he’d rather live in Europe, in the land of his ancestors. I was taken aback. Say what you will about the current American regime, but America is a grand and beautiful land. White people, English, Spanish, French, Scotch-Irish, German, and God knows how many others fought and died for it. To abandon it to the barbarian hordes is to betray these countless warriors, both known and unsung. From my ivory tower in the Balkans, I’ve read about the heroism of Christopher Columbus, Ferdinand Magellan, Francisco Pizarro, Hernan Cortes, Abel Tasman, Jean-François La Perouse, and James T. Cook, of the courage of the pioneers, the Voortrekkers and the many generations of white people who discovered, conquered and built these great states, who founded these nations, as well as seen with my own eyes the true grit of Davey Crocket, Wyatt Earp, and Mick “Crocodile” Dundee, real, imagined, or merely embellished. These are our places. We paid for them with our blood, sweat, and tears. And blood, sweat, and tears have to be invested if they are to remain ours.

The future of white Europeans seems, to me, inextricably linked to a form of international racial solidarity which nevertheless recognizes ethnic differences between European nations and respects the sovereignty of those nations. I do not believe that the various European overseas diaspora nations are exempt from this form of solidarity.

Above all, the great warrior ancestors of European man must lend him their strength and courage yet again. We are a race under siege, in every place where we live — most of all, in our heads; where the lies and propaganda of globohomo seek to defeat us without firing a single shot, by breaking our spirit and manipulating us into consenting to our replacement. They’d have the descendants of Alexander and Caesar, of Charlemagne and Ragnar Lothbrok, of Napoleon and Nelson, of Bismarck, of Pilsudski, of Wrangel and Mannerheim, of Patton, Rommel and the million others whose might shattered the world to go gently into the good night. This is something we cannot allow. The darkness must be defeated. The various snakes and dragons, plumed or gold-hoarding, must be defeated and defeated everywhere they dare threaten our people and our lands.

In all our tongues and faiths, prayers must be said for the soul of Europe, that her sons do not lose hope, that their strength wavers not, that their swords are sharpened and wielded with grace, that we live to see her people bask in the golden sunlight of joy.