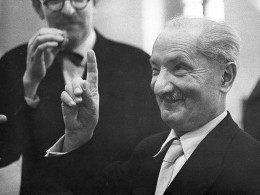 The following brief introduction to Martin Heidegger’s philosophy does not discuss the concept of Being (Sein), simply because there’s no need to.

Our consciousness is a complex interplay of filled and empty intentions, of presence and absence.

But there’s more to showing up than just being present. Even present objects are partially absent. When I look at the knife on the counter, the top side is present, and the underside is absent. But I see the same knife in its presence and absence. If I flip the knife over, the present side becomes absent, and the absent side becomes present. But the knife remains the same. Things show up through an interplay of presence and absence. We encounter them through an interplay of empty and filled intentions.

If the things in the world are never fully present, what about the self? There is nothing closer than our selves. Surely our selves are fully present.

Let’s think this through. When I look at the knife, hear and smell butter sizzling in the pan, and rummage around for the vegetable peeler, these objects are present or absent. But I am not present. I am not focused on myself. I am focused on things other than myself. Moreover, if I were focused on myself, I would not be focused on the things around me. They would still be happening, of course. Smells and sounds and sights would still be bombarding me. But my attention would be focused inward, on myself. When I make myself present, the things around me become—relatively speaking, at least—absent, or I become absent-minded toward them. I could, of course, focus back outward at any time, and I might be jolted into doing so, for instance if the pan began smoking and the fire alarm went off.

To understand what is going on here, we need to make a distinction between focal awareness and marginal awareness. When we are focally aware of an object, we retain a marginal awareness of other objects. We can also switch our focus, making the margin the new center of our attention, while the former center becomes the new margin. Because we are simultaneously focally and marginally aware, the mind can be in many places at the same time. But the mind cannot be focally in two places at the same time. In order to focus on the world around us, we must not focus on ourselves. For the world to be present, the self must be absent.

But what if we set the world aside entirely and just focus on the self? Can the self be fully present to itself, fully transparent to itself?

You can buy Jef Costello’s Heidegger in Chicago here [4]

Heidegger called the ultimate non-objectifiability of conscious life our “facticity.” But doesn’t talking about the non-objectifiable make it into an object? Yes and no. Yes, because everything we talk about is in some sense an object. No, because not everything we talk about is a well-defined, present object. Language can also point to absences and mysteries and blurs.

Heidegger invented the term “formal indication” for non-objectifying discourse about human beings. In Being and Time, he coins the term “existentials” to describe ways of speaking about human beings, reserving the Aristotelian “categories” to describe ways of speaking about things. From his earliest writings to the end of his career, Heidegger was focused on trying to find non-objectifying ways of talking about the human realm, which is one reason his work is so difficult to understand.

Thus far, our discussion of human consciousness has seemingly been entirely abstract and universalist, applicable to any man, anytime, anywhere. But that’s not really true. I am writing this in English, my mother tongue. You are reading this in English, but for many of you, English is not your mother tongue. As soon as we learn to speak, our consciousness is bound up with language. Although the ability to speak is a universal trait of human nature, languages are not universal and natural. There are many different human languages, which vary from time to time and place to place.

Moreover, like all other meaningful social practices, we learn language by imitation before we are capable of self-conscious-ness and critical thinking. Languages and other social practices are traditions, passed down from time out of mind. Language may even be older than man, since we may have learned languages and other practices from our pre-human ancestors. Thus, at the core of the practices by which we make sense of the world, there is an unobjectifiable mystery that transcends each individual mind, merging us into myriad collective traditions that fade into the mists of unrecorded history.

You can buy Collin Cleary’sWhat is a Rune?, featuring extensive discussions of Heidegger, here [8]

Heidegger uses the word “humanism” for the idea that language and other meaningful human practices can be constructed and controlled by human consciousness. Heidegger is an anti-humanist, because he thinks it is closer to the truth that language, culture, and history construct the human mind rather than the human mind constructs language, culture, and history.

This is important, because from Ancient Greece to the present day, our civilization has been in the grip of diametrically opposed views of knowledge and power. When Plato denigrated sense experience and received opinion and claimed that true reality consists of unchanging “forms,” or when Descartes discarded sense experience and tradition until he arrived at an unshakeable foundation (“I think, therefore I am”), they were defining the real as that which satisfied their desire for certitude, which was based ultimately in a desire for power. They were “humanists” because they defined reality as what satisfies human desires. This drive culminated in modern scientific and technological civilization, which defines the real as what is susceptible to scientific understanding and available for manipulation, control, and consumption.

Humanism is a profoundly self-alienating and self-destructive worldview, since it uproots us from the plurality of languages and cultures that give us meaning. It also abolishes all sense of limits to human knowledge and power—the whole dimension of absence, i.e., what escapes our knowledge and power. Humanism severs us from meaning and measure.

By destroying meaning, humanism condemns us to nihilism. By denying measure, humanism delivers us over to the unbounded pursuit of technological mastery over nature. I am going to call the complex of humanism, technology, and nihilism modernity, for short. The end result of modernity is the dehumanization of man and the devastation of the earth.

How, then, can we overcome modernity? Can we lay bare its roots, plan out an alternative, and then put that plan into action? Obviously, such a solution presupposes that we can understand and engineer human history—which is the very modernist delusion we seek to supplant. One can’t fight humanism with more humanism. One can’t fight modernity with more modernity. The solution to nihilism is not intensified nihilism. This is the lesson that Heidegger drew from his political involvement in the 1930s.

Heidegger’s later philosophy is essentially a theory of historical change. As an anti-humanist, Heidegger does not think that human minds create history. Instead, history creates human minds. Modernity was not thought up by Plato, Descartes, and Nietzsche. Philosophers are not the hidden legislators of mankind. But they often offer the earliest and deepest articulations of fundamental changes in the Zeitgeist. To express the idea of historical change without an agent behind it, Heidegger uses the word “event” (Ereignis). The event refers specifically to fundamental transformations of the meaning of everything, such as the emergence of modernity—or its replacement with something else.

But if modernity was not created and imposed by humans, then an alternative to modernity cannot emerge that way either. Anti-modernists need not despair, however, for if Heidegger is right about historical change, then our discontent with modernity is not merely subjective. We too are responding to a change in the Zeitgeist. There’s nothing to prevent us from unplugging as much as we can from modernity, but we don’t have to do the impossible to create a better world, for the change that we dream of is, in a sense, already real, and it is coming to meet us.

If you want to support Counter-Currents, please send us a donation by going to our Entropy page [9] and selecting “send paid chat.” Entropy allows you to donate any amount from $3 and up. All comments will be read and discussed in the next episode of Counter-Currents Radio, which airs every Friday.