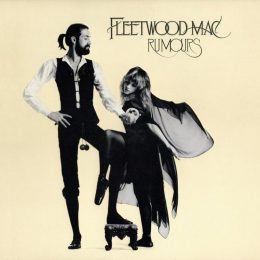 Rumours was recorded by putting five musicians who hated each other inside of the same room for two months. The results were immaculate.

This seems to be contrary to logic, however. Wouldn’t forcing several creative types — people infamous for their egos — who have major beef with each other to work on the same project end in disaster? Many a workplace, collaboration, or poorly-planned flash mob have been ruined by the tempers of the people involved. Discord can tear once-cohesive social movements to absolute shreds in a matter of a few minutes. Great empires have toppled over petty squabbles. Once, a poorly-worded rib at my barber earned me a bowlcut. There are plenty of other examples, but it’s clear enough that when people don’t get along, bad things happen.

Rumours, on the other hand, ended remarkably. Fleetwood Mac’s members agreed not to broach any subject with each other but the music at hand, and avoided contact with each other socially outside of the studio. The women — Stevie Nicks and Christine McVie — rented apartments on the beach in Sausalito, California. The men — Lindsey Buckingham, Mick Fleetwood, and John McVie — bunked in the quarters available to them at their studio. This arrangement kept the band’s interpersonal struggles out of the recording sessions; Buckingham and Nicks had just ended their relationship, the McVies had divorced, and Fleetwood had just been cheated on by his ex-wife. This arrangement didn’t mean that the band put their grievances on hold. Rather, they expressed them in their songwriting, creating an album that runs the gamut from the exuberant to the melancholy. The magic of Rumours is in its fully fleshed-out contents, becoming greater than the sum of its parts.

You would be hard-pressed to find someone in North America, Europe, and likely even in developed Asia that hasn’t heard at least one single off Rumours; it is the fifth best-selling album in all of American music history. Its accessibility likely stems from its eclectic influences and immediate relevance to anyone who has felt life’s ups and downs. The record’s slick production and crisp sounds don’t hurt, either.

Rumours is not just a fantastic album, though. I could go on for days about its songs, production value, and catchiness, but the raw power of Rumours comes from the lessons that its inception can teach about the importance of voluntary engagement and productive collaboration. The timeless tunes are a most welcome bonus.

The values of the Dissident Right are by no means universally held. That’s why we’re broadly forced into anonymity and fighting against near-constant attempts to deplatform us, destroy our livelihoods, and make us into social pariahs. The fear of losing everything understandably scares away plenty of people who may sympathize, or wholly agree with, our principles and stated aims. The Dissident Right and its sympathizers are also, to use a word corrupted by the present state of affairs, a highly diverse lot. We all come from radically different walks of life, with varied experiences, outlooks, ancestries, opinions, wealth, and lifestyles. What we all have in common is a firm belief in our right to determine our own future. This is not to say that many of us do not share other traits and values, be they in connection with our political worldview or wholly removed from it. That is why you see some of the strongest friendships that men have ever known originate in these circles. These bonds are so strong precisely because of the fact that not everyone in a given society, movement, or other shared space will walk common ground with you. You make connections with people and hold on to them because such a thing is rare.

Greg Johnson frequently asserts that a strong movement necessarily allows its actors and sympathizers to engage on their own terms and at their own level of explicitness. The reason this principle is so important is twofold: for one, we’re a crack squad of the highest order, with our people often being very different from one another. To impose any set of rules on what kind of participation we allow or tolerate would be to impose the worldview and metapolitical strategies of the few onto the many. The people uncomfortable with such a state of affairs would either perform poorly or be disillusioned from white nationalism entirely. Two, like any other set of humans, a lot of social interaction will invariably lead to disagreements, bad blood, and feuds both petty and serious between individuals. The standard call to “stop infighting” is useless if we don’t acknowledge that people will always find a reason to bicker with one another. The only way to stop squabbles from leading to disaster is to allow people the right to decide who they want to associate with and how they want to do it — and not begrudge people for utilizing this privilege.

I floated the question of how Fleetwood Mac was able to pull off such an impressive record despite its members being at each other’s throats otherwise. I used the word “force” to describe an arrangement of several egotistical musicians working together. However, Fleetwood Mac’s arrangement was anything but forced. The band agreed on a set of rules that allowed them to decide their own level of engagement. This order let them leave their problems with each other aside, and focus on their shared goal: making an absolutely stellar album. Everyone in the band had their own ideas about how to go about the process, and this is reflected in the album’s varied composition. The group was also highly diverse, made up of folksy Californians, Englishmen, and classically-trained maestros. Not a single one made their own preferences law in the recording studio, nor did they sabotage any of their bandmates’ efforts out of the belief that their approach was better. That is how Rumours ended up as good as it did.

When it comes to white nationalism, our people are in similar boats. All of us come to the table with varied skills, opinions, and methods. A surefire way to destroy the work that we do would be to demand that our collaborators, comrades, and colleagues work towards our personal vision of “white nationalism plus my hobby horse.” We are wading through uncharted waters, as well, so to justify shutting down one method of activism on the suspicion it is not effective as another is speculative at best and damaging at worst, especially if the actions of another individual or group does no harm. And, finally, we are all in this fight voluntarily. Rather than a bunch of musicians forced to be in a room together, we’re a bunch of musicians who set differences aside to achieve a shared goal.

We can take quite a few cues from Fleetwood Mac. I would advise against the cocaine use — but if you’re curious, I do know a guy.