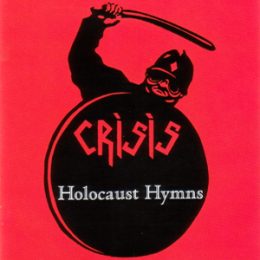 Crisis was an English punk-rock band formed in 1977 in Surrey. Their initial lineup consisted of Insect Robin the Cleaner, Phrazer, and the most famous two who didn’t have absurd nicknames: Douglas Pearce and Tony Wakeford. Crisis was explicitly a Leftist band, appearing at various Rock Against Racism concerts and collaborating with artists and organizers from the Anti-Nazi League. Their music fit snugly in place with the rest of the contrived punk-rock of the 1970s, dealing with themes of internationalism, anti-racism, homosexual alienation, and the dirty deeds of England’s plutocrats. The band formed at a time of great sociopolitical upheaval, with Pearce and Wakeford being especially impacted by the crush felt by the working class.

This collection, Holocaust Hymns, is a compilation of the various Crisis singles, splits, and rarities that were recorded while the band was active. This version is also remastered and reordered from the last Crisis compilation, We Are All Jews and Germans.

Musically, Crisis had a winning formula. Pearce is infamous for his reedy guitar style, and to hear it electrified (and even less mature) is a rather amusing example of one thing that will never change about the man. Hymns almost exclusively features marching rhythms, making them great fits for protests. Lyrically, Crisis also hit the Left’s nails like a hammer; they frequently conflate nationalism with imperialism, call upon the yoof to take up arms, and sprinkle in some social issues for good measure. Where Crisis seems to diverge from other contemporaneous punk groups is in the inklings of Pearce’s synthesis between race and class that made their way into his songwriting.

The tracks included on this record include some of their most popular, like “Holocaust,” “Pc 1984,” and “No Town Hall,” the band’s very first single. A great deal of Hymns is indistinct by virtue of the tracks following the standard punk playbook, so regaling them blow-by-blow is unnecessary. The track of greatest intrigue is the curiously named “White Youth,” which was a tongue-in-cheek title at the time, but one that accidentally highlights an important truth about the nature of any socialist movement: solidarity springs from shared backgrounds. Pearce viewed racial division in the country as a red herring, a conflict stoked by the bourgeoise ruling class: “Fall for the race charade, and you will pay.” The “White Youth” of England, Pearce felt, had quite a bit in common with both each other and the relatively few non-whites who were also in the country at the time.

This line of thinking was not uncommon in the postmodern Left. Such a sentiment does, obviously, suggest that racial diversity within a country is a non-issue, with conflict that follows from it being a construction of the ruling class. But there is an accidental admission in this rhetoric: Divisions between different races can be manipulated for political ends, because these divisions exist in some form or other to begin with. (The false proletariat brother war narrative is less popular in the Left nowadays due to this subtext.) Those looking to defend Pearce against accusations of racism in some form or another — typically in bad faith, often to falsely claim neofolk for the Left — will often cite his work in Crisis. But it is because of, not in spite of, Pearce’s music in Crisis that he began to reach his National Bolshevist worldview. If people of different races living in the same country can be led to attack each other, distracting the working class from more productive organizing, then this extraneous factor must be dealt with.

In an interview with Occidental Congress, Pearce even points out that many on the “Right” or “Left” in the broadly anti-establishment punk and skinhead scenes had quite a bit in common to begin with:

And, despite being ‘obviously’ Left-wing we had many far-Right followers which gave birth to a whole gamut of interesting liaisons and conversations and mutual agreements and perhaps even respect. Nothing was ever straightforward, no matter how much we might have even liked it to be.

Pearce’s admiration for Mishima and Röhm is beginning to make a heap of sense! (No, not because they are all homosexuals.)

Crisis was also not without controversy when they were active. The aforementioned “White Youth” was written up as a “white supremacist” anthem more than once. Though, knowing the music journalism business myself, we can likely chalk at least one of those reviews up to someone not even listening to the song. The band’s martial aesthetics and refusal to carry the line meant that their appearance at several Rock Against Racism concerts led other performers to pull out. Pearce’s homosexuality — addressed on this compilation on “Alienation” — was also a cause for hand-wringing, both on account of “homophobia” generally and due to Pearce’s idiosyncratic way of presenting it. Media coverage of Crisis was also instrumental in Pearce coming to the position that involvement in radicalism of any kind will inevitably lead to willful misunderstanding and straw-manning of the subject, an attitude that he would explore in greater detail with Death in June. Internal strife was also present within the band; Pearce has stated that he and Tony both sought to “destroy” the group in its later years.

Metapolitics aside, the music of Crisis is worthy of brief discussion. Aside from their more straightforward punk songs, Crisis’ sound began to approach what is popularly considered “post-punk” throughout their recording history. Tracks like “No Town Hall,” “Back in the USSR,” and “Red Brigades” closely mirror the developments of groups like Talking Heads, Joy Division, and Wire, often several years before these groups began to come into the limelight. The music of early Death in June sounds like a more bare-bones, esoteric-essentialist take on the sounds of late Crisis, a shift that was apparent in Pearce’s philosophical outlook as well.

In all of its parts, the music of Crisis can be considered more than a mere progenitor of Pearce’s Death in June. There were other groups that rose from Crisis’ ashes, but none of them are of any real significance both musically and culturally. In Crisis, Pearce began to lay the groundwork for a genuine counter-cultural artistic movement; his disillusionment with the Left stemmed not just from his changing worldview, but also from his dissatisfaction with their methods and metapolitical abilities. The Left was fighting a losing battle by clinging to the immature ideal of rebelliousness, even as their views slowly became hegemonic. Their censorious drive also imperiled badly-needed debate and discussion; punk rockers getting testy with one another was just a predecessor to socialists demanding their tovarischti avoid gendered language.

Rather than viewing Crisis as the mere product of youthful ignorance and idealism, we can consider Crisis to be a case study in how genuine art made within demonstrably incorrect contexts and premises leads to a process of philosophical reflection, rejection, and realization. Crisis fell apart not because its members were drunkards or drug addicts, like many of their contemporaries were. Crisis fell apart because its central creative force was seeking the truth, and he quickly realized he couldn’t do this honestly and still produce the tunes that the punk-rock scene specifically, and the Left more broadly, demanded.

In short, Pearce grew up.

» The Ideas of Paul Weyrich