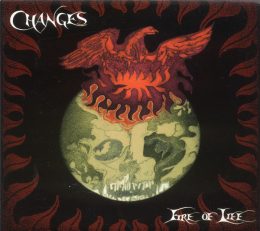 Changes can be considered the very first example of a neofolk band. Formed in 1969 by cousins Robert N. Taylor and Nicholas Tesluk, Changes has its roots in the earliest days of the folk revival and hippie scenes in the United States. This is a marked difference from the Big Three of neofolk — Death in June, Sol Invictus, Current 93 — who all had their genesis in the punk, industrial, and performance art scenes in the United Kingdom in the 1970s. This difference aside, the music of Changes trended in the same direction that neofolk across the pond did, bringing mythical, poetic splendor to often simple, sometimes challenging, and always beautiful arrangements on guitar. While Changes lacked the martial antecedents of Douglas Pearce (Death in June), David Tibet (Current 93), and Tony Wakeford (Sol Invictus), they shared an affinity for the mystical and magical found within the European soul.

While Pearce, Wakeford, and Taylor all ended up reading Oswald Spengler, Taylor is the one who got around to it first. He quickly became disillusioned with the free-love debauchery of the psychedelic era, and was actually involved in an anti-communist street militia called The Minutemen in Chicago during the ‘60s. This, alongside the band’s ecstatic use of themes Evolan and Spenglerian, has caused a great deal of consternation [1] among antifascist types who mistakenly believe that they have any real claim to neofolk. Of the neofolk pioneers and their racial consciousness, Wakeford was the most explicit, Pearce is the most esoteric, and Taylor is the most unapologetic. In an interview with Chronicles of Chaos [2], Taylor even goes on to address the notion of “white flight” and the inescapable crime of a neighborhood moved into by blacks — not only does he address the problem of the integration fantasy, but the hollow husk that materialism leaves for a man once his homelands are destroyed:

None of this had any real connection to integration or peace between races. Integration did not occur — flight of the whites occurred. It was no secret that once blacks predominated in an area, the crime rate would soar and the streets would become dangerous to walk. These white working-class people were a large segment of the population who worked at menial jobs in factories, mills, construction, and occupations of this sort and level of society. For most of them, their job (however humble and base it might appear in society’s eyes) their home, car, and family was about all they had in the world. These were the primary tangible things that they had to show for their labor, and suddenly their property lost half of its value on the market and they felt impelled to flee the area.

Fire of Life was released in 1996 at the insistence of Michael Moynihan, who was enthralled by the re-discovered tapes of Changes’ music from 1969 to 1974. The influence of psychedelia is strong, but turned on its head to much more intriguing and spiritually significant ends. By melding the deliberately novel American psychedelia and its open-mindedness with the philosophy of Francis Parker Yockey, Germanic mythology, the apocalyptic pseudo-cult The Process [3], Hermeticism, and Faust, Changes produced a musical brew strong enough to excite the imagination of even the most rational of nerds on planet Earth. If you’re inclined to the magical in any way, especially as it relates to the Right, you’ll find Fire of Life to be like a bowl full of candy. As an added bonus, you’ll be filling Leftists with rage most impotent by enjoying the ride.

One of the Life’s few downsides is its poor recorded quality. Sourced from multiple archived tapes, some damaged by time and others simply tarnished by the limited quality one could expect from DIY recording in the 60s, Life would have been done great justice with an experienced audio engineer on hand. If one approaches Life like they would any other historical record, however, these blemishes might not even be a bad thing; in some ways, the record’s lackluster sound lends it an air of authenticity and shift the focus onto its raw, mystical power. You can buy Collin Cleary’s Summoning the Gods here [4].

Opening and title track “Fire of Life” is exuberant in its themes. Taylor ruminates on Dionysian pleasures, vitality, and potency, while blurring the lines between spirited energy and man’s capacity for destruction. The ambiguity of “Life” is one of its most compelling attributes; one cannot truly tell whether Taylor is mourning the death of the world at the hands of man’s fiery impulses, or reveling in man’s refusal to let death smother their embers. Tesluk’s guitar prowess is on clear display as well, his varied strumming evocative of medieval music without straying from his psychedelic roots.

“Sweet Eve” is another entry in neofolk’s tendency to devote ballads to loves lost, rather than gained. (Changes’ ballads are perhaps a counterweight to neofolk’s other hopeless romantic, Douglas Pearce, given that these songs are probably about women.) Musically, “Eve” includes tender pan flute and Tesluk’s unique ancient-modern guitar work. “Eve” succeeds in meditating on the nature of love and its highs without becoming exuberant, nor depressive when love eventually fades away.

“Bleeding Out Your Feelings Evermore” is in prose, frequently moving between different sets of seemingly incoherent imagery — a hallmark of the psychedelic genre. Lyrically, “Evermore” dwells on a lack of soulfulness in modern society, and the inevitable breakdown it inspires in men. “Evermore” has a haunting, nearly Gothic melody, courtesy of Tesluk.

“The Saddest Thing” is another lamentation on lost love. It is much more melancholic than “Eve,” however, with its lyrical content focused on the pain of a relationship’s immediate end.

“Early Morning Hours of the Night” sounds like a contradiction, but it’s indubitably about the wee hours of the morning — 1 to 4 AM or so — that blend into the nighttime of an insomniac. It’s likely the first example of neofolk’s endless obsession with the myriad natural means by which men can alter their mental state, sleep deprivation and the morning afterward being a favorite. The ups and downs of the track, and the changing imagery of the lyrics, suggest travel of some kind; either in physical form, or in one’s head.

Taylor describes “Memorabilia” as an attempt to channel Faustian energies in the recollection of one’s life. The diverse array of items described, be they natural features or photographs, represent the sum of a man’s life. He evidently traveled far and wide, and loved as much as he learned, with all of his keepsakes together forming a set of items that contain his soul. In keeping one’s memories inside the memorabilia, as the narrator has, a cruel tradeoff is made; a man’s soul can be preserved in them only as long as they last, and the man who safeguards them cannot find solace in looking upon them, as they are as much a part of him as his own memories.

“Horizons that I See” is a traveling man’s song, through and through. It’s here that Taylor and Tesluk begin to sound like a Nietzschean Simon & Garfunkel; their harmonizations are quintessentially 70s, but their subject matter dotes on metaphysical matters of far greater import than any pop singer could think of broaching at the time. “Horizons” paints a lovely picture of North America, particularly the American Southwest, with descriptions of high deserts and endless natural splendor.

“R.I.P. Van Winkle’s Pipe Dream” is a modern, woozy take on the Legend of Sleepy Hollow. The Van Winkle character in the Changes version is a man disattached from society, who finds solace in his own rejection from a society he doesn’t understand. The closing line, “Rip Van Winkle, just pass me the pipe!” makes for a fantastic idiom.

“The Stranger in the Mirror Part 3” is the track most explicitly centered around Old Norse myth on the album. “Mirror” is focused on a revival of faith, its narrator called to action from a fleeting encounter with one of the old Gods in his daily routine. Rather than embarking on a vision quest, however, the narrator is to look within preserved myth for the wisdom needed to carry on. It’s a romantic, and thoroughly affirming, notion; the answers we seek lie not in the unknown, but are carried with us in our hearts and histories. It’s merely a matter of taking the time to look backward.

“Twilight of the West” is a nearly 11-minute long epic, centered around the Spenglerian decline of the West that Taylor unabashedly cites as a central influence in his songwriting. It’s here that the music of Changes truly feels like it belongs wholly out of time itself; recorded in the 1960s, yet just as powerful in 2020, and predating the more famous Death of the West [5] recorded by Pearce and company by nearly 24 years, the journey that Taylor takes his listeners on resonates on a level that could only be explained as spiritual.

Taylor elected to use “twilight” rather than death, a word that echoes the concept of the Twilight of the Kali Yuga. The light inside of us shall not fade, but find its next dawn over the course of centuries. I cannot recommend you listen to this album enough. When you do, consider the maxim of Counter-Currents as you bathe in Changes’ rich sounds:

Those who fight for the Golden Age live in it today.