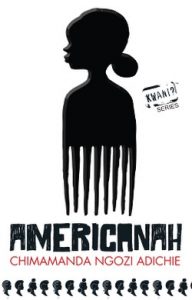 If you’ve never heard of Chimamanda Ngozi Adichie, then you’re missing out on one of the leading lights of contemporary literature. If you don’t appreciate her, then you’re a bigger Philistine than the Biblical Goliath. If you’ve ever wondered what Dostoyevsky would be like if he was reincarnated as a Nigerian lady in modern times, or imagined Shakespeare with boobs and an Afro, then this is the one.

Her latest work is Dear Ijeawele, or A Feminist Manifesto in Fifteen Suggestions (New York, Knopf Publishers, 2017). She’s done some works of literary fiction as well, always getting ecstatic reviews. One of her greatest classics is Americanah (New York, Alfred A. Knopf, 2013). The novel’s title refers to a Nigerian phrase, meaning an expatriate who has been perceived as becoming too Americanized. A miniseries by HBO Max is planned for May of this year, unless the Wuhanic Plague [1] throws a monkey wrench into the gears. Of course, you’ll want to see this and other enlightening TV shows, so by all means, keep paying your cable bill to the MSM like a good citizen!

It opens with the main character, Ifemelu, contemplating conditions at Princeton. She laments that there won’t be any place nearby that can do her hair properly. Well, that can be a problem. She waits for a train to Trenton so she can get it braided. Then she reminisces about how Americans like to talk. Among past conversations:

If they asked what she did, she would say vaguely, “I write a lifestyle blog,” because saying “I write an anonymous blog called Raceteenth or Various Observations About American Blacks (Those Formerly Known as Negroes) by a Non-American Black” would make them uncomfortable.

Actually, the evocative title of her blog sets the book’s theme. Much of it has to do with an African lady schooling us Americans about race. With the first edition weighing in at over 600 pages, you’ll certainly get your money’s worth of that. More from this scene:

She had said it, though, a few times. Once to a dreadlocked white man who sat next to her on the train, his hair like old twine ropes that ended in a blond fuzz, his tattered shirt worn with enough piety to convince her that he was a social warrior and might make a good guest blogger.

Would that be a Social Justice Warrior [2], perchance? Sadly, her hopes are misplaced:

“Race is totally overhyped these days, black people need to get over themselves, it’s all about class now, the haves and the have-nots,” he told her evenly, and she used it as the opening sentence of a post titled “Not All Dreadlocked White American Guys Are Down.”

Ouch; what a cynic! Apparently, Whitey Dreads was an economic leftist, but not a cultural Marxist. (But whoa — wait a minute — shouldn’t that be exactly what we want in a post-racial society? On second thought, I’m a dumb blond from Flyover Country, so maybe I shouldn’t even have an opinion on this.) At least the exchange gave our protagonist some subject matter to write about, encouraging others not to be so un-hip.

Ifemelu reminisced likewise about an even more popular blog post. It was about someone who adopted a black baby and then complained that his neighbors accused him of virtue signaling [3]. That one was called “Badly-Dressed White Middle Managers from Ohio Are Not Always What You Think.” The poor shmuck — now that’s taking fire from both sides!

However, her blog had come to an end. It’s not because she got deplatformed, of course. Rather, she retired it herself four days ago. She recalled the replies from her fan club to the farewell post: 274 of them and counting; quite a fair bit of traffic. That includes a goodbye from the prolific SapphicDerrida, apparently a postmodernist into muff diving.

Finally, the reminiscence is over and she’s on the train at last:

The ice-cream-eating man sat beside her on the train and, to discourage conversation, she stared fixedly at a brown stain near her feet, a spilled frozen Frappuccino, until they arrived at Trenton.

During all that, she reminisces some more, this time about her early experiences in the New York subway. She had observed that mostly skinny white people exited in Manhattan and mostly fat black people exited in Brooklyn. (I’ll add that an African immigrant might be rather happy to find people who look like her to be so well-fed.) Then she learned that being fat is something bad. She mulls over a later reminiscence about someone committing a microaggression [4] concerning her weight:

But “fat” came back to her last winter, after almost thirteen years, when a man in line behind her at the supermarket muttered, “Fat people don’t need to be eating that shit,” as she paid for her giant bag of Tostitos. She glanced at him, surprised, mildly offended, and thought it a perfect blog post, how this stranger had decided she was fat. She would file the post under the tag “race, gender and body size.”

Then she reminisces that she looked in a mirror and realized that she really was fat. Angst soon follows, despite all the things that were going right in her life: a blog with much traffic, lucrative speaking fees, a fellowship in Princeton, and a happy relationship. That leads to a search for her roots, making her want to go back to Nigeria. That surprises her current boyfriend, and she reminisces about an argument they had previously:

But they had survived that fight, mostly because of Barack Obama, bonding anew over their shared passion. On election night, before Blaine kissed her, his face wet with tears, he held her tightly as though Obama’s victory was also their personal victory.

In the end, The Lightworker wasn’t able to fix that relationship. Finally, the train trip was over, the rapid-fire flashbacks were done for now, and onto the coiffure. However, that was merely the warmup to this gripping tale, since that was barely into the first chapter. Later, she returns to Nigeria. (I’ll have to say in complete sincerity that this sets a great example.) Then there’s tons of angst about readjusting and lots of stuff about her love life.

Do you suppose that this might be mildly interesting for a narrow target audience into that sort of thing — maybe students pursuing postcolonial studies degrees [6], leftist Nigerian soap opera fans, and so forth? Perish the thought; such would be damning by faint praise for an epic with universal appeal like this! It’s little wonder that Chimamanda Ngozi Adichie has over a dozen literary awards to her name: the O. Henry Prize, the MacArthur Foundation Genius Grant, the fiction category of the Chicago Tribune Heartland Prize, und so weiter.

So smart about so many subjects that to call it a novel about being black in the 21st century doesn’t even begin to convey its luxurious heft and scope. . . Capacious, absorbing and original.
— National Public Radio

Adichie is uniquely positioned to compare racial hierarchies in the United States to social striving in her native Nigeria. She does so in this new work with a ruthless honesty about the ugly and beautiful sides of both nations.
— The Washington Post

“Americanah” is witheringly trenchant and hugely empathetic, both worldly and geographically precise, a novel that holds the discomfiting realities of our times fearlessly before us.
— The New York Times Book Review

The above were merely a few encomia the MSM has written about this timeless classic. I might add that NPR, WaPo, and NYT are right about everything, now aren’t they?

But what am I doing wrong?

I happen to be an author too. I’ve also written a book with themes about cultural conflict and the search for one’s roots, and I daresay that Space Vixen Trek Episode 13: The Final Falafel [7] is a real hoot. Better yet, it’s full of fun stuff like a giant silkworm chase scene, evil Space Clams looking for Galactic Overlord Xenu [8], and the dapper talking lizard, so what’s there not to love? Granted, none of that is as entertaining as staring at a Frappucino stain and reminiscing, but surely there’s a little sparkle in my story somewhere. I’m a little puzzled, though. Why haven’t The Final Falafel and my other works [9] received a scintilla of critical acclaim by the MSM?

That, of course, is the signal boosting that can take a book from the sales doldrums and turn it into an overnight hit. Could the lack of interest by the literary establishment possibly be about my background [10]? Maybe I don’t tick enough diversity checkboxes to be recognized? Why, surely that can’t be the case, because I’ve come out as a trans lesbian of African descent [11]. Therefore, I have lots of intersectionality points, just like Chimamanda Ngozi Adichie.

Perhaps I need a new angle. I hope she won’t mind too much if I borrow her shtick? So she wrote about a Nigerian who went to the USA and made herself famous with a blog called “Raceteenth or Various Observations About American Blacks (Those Formerly Known as Negroes) by a Non-American Black.” I think I can work on a variation of that theme.

So how about if I write a story about a white guy who goes to Japan and finds that everyone regards him as a gaijin. That’s pretty momentous, right? They actually noticed that he’s different! Moreover, he’ll be shocked that Japanese society doesn’t adapt effortlessly to him, but instead they expect him to adapt to their society. How dreadful — they’re not catering to his desires! Then he starts writing a blog about the Caucasian (formerly known as Aryan) condition in the Far East. This includes woebegone observations about being a foreigner in Japan, and snippy barbs about random citizens he meets. Then he goes back to the USA to start a new phase of his life, and I’ll make this one chock-full of wistful reminiscence.

Surely the literary establishment will take notice and launch my career as an author into the stratosphere. I can see the royalty checks pouring in already!

I wish I could call it The Ugly American, but I think that title has been taken.