A Time to Smell the Roses 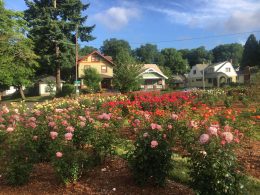 I have lived in this middle-class, predominantly white, aging metropolitan subdivision for nearly 15 years. Despite the palpable demographic changes in the local community, I feel safe and comfortable here. Tall oak trees provide ample shade to regularly spaced homes, each possessing an aesthetically unique facade, in no small part due to the broad 1970s-2000s variability in taste and style.

In that time I have experienced a marriage, the birth of a child, the agony of a divorce, endured quite a few tragic local events, and weathered some regional catastrophes, but nothing thus far compares to COVID-19, not even the flood a few years back. Not so much in terms of the damage it has wrought, but rather in terms of the social and cultural decay that it has exposed. We all see it, even if some of us do not recognize it for what it is.

Because of social distancing and the economic shutdown, in the last 2 weeks, I’ve seen more of my neighbors outdoors engaging in family activities than I can recall occurring previously in an entire warm season. Just this Saturday, I saw a mother strolling with her teenage children. I observed a greying middle-aged father jogging with his college-aged daughter. I chatted with an older couple walking their dog as a single file gang of boys rode by on their bicycles. If I didn’t know better I might believe I’d been transported into a 1950s parallel universe of high-trust Americana.

To be fair, these activities aren’t a rarity in my neighborhood. I’ve seen that college-aged girl out for a jog before. I’ve just never seen her with her dad. I’ve seen that mother out for a walk, I just don’t recall seeing the teenagers with her. Of the 6 or 7 boys riding their bikes, I’ve seen all of them independently, or perhaps with one other companion, but never what appears to be all the young boys on my street riding together. And certainly not all of this within the window of an hour!

My ten-year-old son and I regularly ride our bikes in the spring and summer. We pulled them out for the first time this spring since the rain slacked off. As we rode through the neighborhood, we saw a dad playing a basketball game of “HORSE” with his son, a backyard party a little further down the street, and multiple older couples working on their landscaping. Not only has the neighborhood activity been orders of magnitude higher, but my neighbors have also been noticeably friendlier. People waving and stopping to chat (even while maintaining their social distancing). Everything has the feel of “we’re all in this together.” However, unlike the panic of a flood, the urgency of a hurricane, or the confusion of a prolonged power outage, there is a relaxed, carefree, almost jovial atmosphere in my community.

Something troubling, perhaps even sinister, occurred to me as I took mental note of this uptick in neighborliness. I juxtaposed the lack of racial solidarity that modern Europeans and white Americans are plagued by with the stereotypical culture of black neighborhoods. Given the higher crime rates, illicit drug use, promiscuity, poverty, and other ills that blacks face in their communities, I, as a middle-class white man, have always looked down upon the more active nature of black neighborhoods with a sense of disdain. Boys on bicycles aimlessly riding around? Nothing but trouble! A mother walking with some teenagers? I bet their father(s) are in jail. A game of pickup in the driveway? Future Basketball-Americans training for the NBA. Young men drinking “Fowties” on a front porch. You can see all of these things, and more, any time of day and any day of the year in black neighborhoods.

To be certain, I’m not saying that “we’re all just the same.” There’s a difference between that backyard party in my neighborhood vs the black men on the porch drinking their malt liquor. The folks in my neighborhood don’t normally party at noon on a Wednesday because they’re at work or in school. White folks tend to party in a little less public, “open house,” kind of way. Furthermore, you won’t typically see young white men gathered together making catcalls at females walking down the street. We’re just different. Still, why are white neighborhoods so much less sociable than our black counterparts in the “hood”?

I propose a simple, obvious answer to this question. One that COVID-19 has laid bare. White people are too obsessed with work, career advancement, material comfort, and status. We rightly complain that fertile black females are coddled and allowed to be government handout whores and entitlements leeches, while neoliberal feminism pressures childless white women into corporate boardrooms. Black children may often be fatherless, but white children all too commonly have vacant fathers whose absence is due to overtime and deadlines rather than abandonment. Increasing competition and academic pressures often keep white children glued to a textbook or laptop while black teenagers are free to roam on a Wednesday afternoon.

I’m not proposing that white America needs to abandon our work ethic. Indeed, work ethic is one of the significant characteristics that sets us apart! Instead, I suggest that COVID-19 is a “smell the roses” moment in our collective experience.

Would it be such a bad thing if that restaurant around the corner shut down for good? Many of us over the age of 40, and certainly over 60, can recall an America that didn’t have 500 fast food options to choose from within 10 miles of our homes. Somehow we managed (and were significantly less obese)!

Having two or more late-model cars in the driveway used to be considered a luxury for only the richest families in town, while in 2020 COVID-19 America, young status-driven couples get “married” to a hefty mortgage and two obscenely high car notes before they turn 25, often delaying their motivation to start a family until their mid-30s, if divorce doesn’t get them first.

COVID-19 has exposed the social rot and decay that consumerism and postwar neoliberalism has created. COVID-19 has opened a window into white alienation and disunity. We can only hope that this unprecedented time spurs more white people to seek answers outside of the mainstream for the obvious questions they will ask. It is up to us in the Dissident Right to offer an alternate vision for the future.