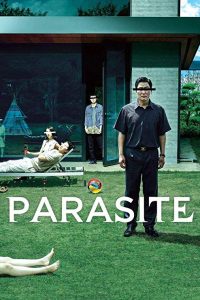 Bong Joon-ho’s Parasite swept the Oscars ceremony this year, winning the awards for Best Picture (the first foreign-language film to earn the award), Best Director, Best Original Screenplay, and Best International Feature Film. It has been hailed as the best film of 2019 and currently enjoys a 99% approval rating on Rotten Tomatoes. Like the similarly over-hyped Knives Out, Parasite is a technically competent but underwhelming film whose vapid social commentary has secured its popularity with liberal critics.

Parasite follows the destitute, basement-dwelling Kim family — mother and father Chung-sook and Ki-taek, son Ki-woo, and daughter Ki-jung — as they gradually wheedle their way into the lavish home of the affluent yet gullible Park family. Their scheme is set in motion when the recommendation of a friend earns Ki-woo a job as the tutor of the Parks’ daughter. Ki-Jung then becomes the art teacher of the Parks’ son after posing as an American-educated art student specializing in art therapy. Still unsatisfied, the Kims devise a plot to get the Parks’ chauffeur and housekeeper fired so Ki-taek and Chung-sook can replace them.

When the Parks go on a camping trip, the Kims spend the weekend in the Park home. They get drunk and laugh at the Parks’ obliviousness. But things do not go according to plan, and the sudden arrival of the former housekeeper interrupts the Kims’ bacchanalian celebration. She is reluctantly admitted by Chung-sook, to whom she reveals the existence of a hidden bunker, where her aging husband has lived (unbeknownst to the Parks) for several years. As the Parks’ housekeeper, she fed and cared for him regularly. The other Kims, eavesdropping on the exchange, betray themselves by toppling down the stairs and calling each other terms of familial endearment.

The Kims receive news of the Parks’ impending arrival and hastily tie up the old housekeeper and her husband. The husband enacts his revenge the following day by unleashing violence upon the Kims during the Parks’ son’s birthday party. Blood is spilled on all sides.

The clueless Park family are hardly the villains in this tale, but Bong’s sympathies lie mainly with the Kims. The film lingers upon their squalid living conditions and hammers home the point that financial desperation, and not innate immorality, led them to commit their crimes. They are the innocent victims of an oppressive system.

At first glance, it seems odd that the establishment should salivate over a film that parodies the lifestyle of the upper class and critiques income inequality.

But it makes sense. Parasite allows elites to congratulate themselves on being “woke” while simultaneously validating their superiority complex. Furthermore, the film ultimately reneges upon its radical pretensions. Finally, it is foreign, which has endeared it to liberal critics who pride themselves on being worldly and sophisticated.

Upper-class liberals are sympathetic to the poor insofar as they are helpless and do not threaten their cultural and political dominance. They want to be able to signal their support for the less fortunate while retaining their elite status. Parasite plays right into this. The Kims are indeed vulgar, petty, and unscrupulous, but this makes them more sympathetic, if anything. Liberals prefer to conceive of the poor as helpless children, and the Kims’ behavior befits children. And their behavior is supposed to be evidence of their helplessness and desperation, since it is attributed to their environment.

Parasite never really poses a genuine challenge to neoliberal capitalism. It never strays beyond merely sympathizing with the Kims’ adroit attempt to accommodate the system, itself an inherently moderate sentiment. Bong despairs over the inequality that plagues modern Korean society, but he fails to offer a potential solution. Hence Parasite’s popularity among the champagne socialist crowd.

Ki-taek articulates Bong’s amoral, nihilistic worldview toward the end of the film: “Whether you kill someone or betray your country, none of it fucking matters.”

Bong almost looks favorably on the parasitic relationship between the two families. To him [5], their interactions are mutually beneficial, even “beautiful”: “The word ‘parasite’ is a negative word that conveys contempt, but saying ‘coexistence’ gives rise to a beautiful, positive expression. I’ve created a peculiar setting in which the rich and poor, who normally don’t come in contact with each other, interact closely.”

This line of reasoning is apt to appeal to wealthy liberal viewers who employ Mexicans. The relationship between white Americans and Mexicans is mutually exploitative: White people depend on Mexicans and exploit their willingness to work for low pay, while Mexicans exploit our resources and trusting nature. But liberals would prefer to think of this relationship as an example of the beauty of diversity.

To Bong, the titular “parasite” is probably the housekeeper’s husband, who lives rent-free in the Parks’ home and survives thanks to his wife’s labor. He is the only character who exists outside the system, and it is his fault that the otherwise harmonious relationship between the Parks and the Kims disintegrates.

The bloody conflict that breaks out at the end has an air of arbitrariness to it. It is an accident, the result of the unwanted intrusion of the “parasite.” Organized forms of violence, by contrast, are absent from the film. This, too, is surely reassuring to upper-class liberal audiences.

It is interesting that the same critics who fawned over Parasite were wary of Joker and claimed that it would provoke violence. Both films explore the themes of inequality and class conflict, but no one expressed such concerns about Parasite.

You can buy Dark Right: Batman Viewed from the Right here [9]

This is partly due to the disparity between their respective target audiences. Joker’s comic-book style is straightforward and down-to-earth, while Parasite boasts sleek, art-house production values and a veneer of sophistication. Joker unfolds from a lower-class perspective in a lower-class world, while Parasite depicts the poor in a patronizing, caricaturish manner and takes place mostly in the Parks’ stylish postmodern abode.

But this still doesn’t answer the question of why liberals, who ostensibly care about the downtrodden, were afraid that Joker would resonate with people in the first place and why they sounded the alarm about the film long before they had even had the chance to watch it. The obvious explanation is they care much more about issues pertaining to race and gender than class, and they saw the Joker simply as a white man. His station in life was irrelevant.

This goes a long way toward explaining why liberals have dubbed Parasite the best film of 2019 yet continue to be indifferent to the suffering of ordinary Americans — particularly working-class white men, who are more likely than any other demographic to die “deaths of despair [10].”

Parasite is a thoroughly banal and shallow film. Other films have tackled the themes of poverty and inequality with much more subtlety and humanity (my favorite being Vittorio De Sica’s Bicycle Thieves, a neorealist masterpiece). Parasite fails to inspire any emotion beyond mere pity, if that. The Best Picture award should have gone to Once Upon a Time in Hollywood [11].