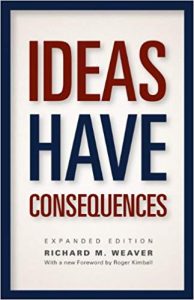 This is another book about the dissolution of the West. I attempt two things not commonly found in the growing literature of this subject. First, I present an account of that decline based not on analogy but on deduction. It is here the assumption that the world is intelligible and that man is free and that those consequences we are now expiating are the product not of biological or other necessity but of unintelligent choice. Second, I go so far as to propound, if not a whole solution, at least the beginning of one, in the belief that man should not follow a scientific analysis with a plea of moral impotence. [1] [1]

Although Weaver makes no explicit acknowledgment, the influence of Giambattista Vico pervades the book. The world — that is, human society and human institutions — is intelligible because these institutions are created by man. As such, Weaver is implicitly mirroring the philosophical basis of Vico’s philosophy: Verum et factum conventuntur (the true and the made are interchangeable). [2] [2] From here, Weaver follows the deductive course of his logic. Humans created human society, humans have chosen unwisely and made a mess of things, and humans have the capacity to correct their mistakes.

So few are those who care to examine their lives, or to accept the rebuke which comes of admitting that our present state may be a fallen state, that one questions whether people now understand what is meant by the superiority of an ideal. One might expect abstract reasoning to be lost upon them; but what is he to think when attestations of the most concrete kind are set before them, and they are still powerless to mark a difference or to draw a lesson? [3] [3]

It was William of Occam who propounded the fateful doctrine of nominalism, which denies that universals have a real existence. His triumph tended to leave universal terms mere names serving our convenience. The issue ultimately involved is whether there is a source of truth higher than, and independent of, man; and the answer to the question is decisive for one’s view of the nature and destiny of humankind. The practical result of nominalist philosophy is to banish the reality which is perceived by the intellect and to posit as reality that which is perceived by the senses. [5] [6]

Logic became grammaticized, passing from a science which taught men vere loqui [true speaking] to one which taught recte loqui [correct speaking] or from an ontological division by categories to a study of signification, with the inevitable focus upon historical meanings. Here begins the assault on definition: if words no longer correspond to objective realities, it seems no great wrong to take liberties with words. From this point on, faith in language as a means of arriving at truth weakens, until our own age, filled with an acute sense of doubt, looks for a remedy in the new science of semantics. [6] [7]

We approach a condition in which we shall be amoral without the capacity to perceive it and degraded without means to measure our descent. . . Added to this is the egotism of modern man, fed by many springs, which will scarcely permit the humility needed for self-criticism. [7] [8]

The truth is that he [modern man] has never been brought up to see what it is to be a man. That man is the product of discipline and forging, that he really owes thanks for the pulling and tugging that enable him to grow — this concept left the manuals of education with the advent of Romanticism. This citizen is now the child of indulgent parents who pamper his appetites and inflate his egotism until he is unfitted for struggle of any kind. [8] [9]

Individualism, with its connotation of irresponsibility, is a direct invitation to selfishness, and all that this treatise has censured can be traced in some way to individualist mentality. But personality is that little private area of selfhood in which the person is at once conscious of his relationship to the transcendental and the living community. [10] [11]

The contempt with which modern dictatorships and bureaucracies reject difference and dissent is but a brutal aspect of the same thing [the enforcement of sameness, that is, equality, and a rejection of personality]. Deviation from the proletarian norm bids fair to become the heresy of the future, and from this heresy there will be no court of appeal. [11] [12]