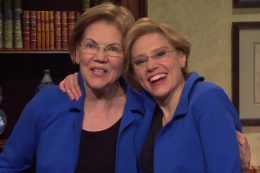 The news was greeted with much wailing and gnashing of teeth. There is now not a single viable female candidate in the race for president. (Tulsi Gabbard is still in the race, but she’s polling in the low single-digits and her unorthodox politics make her a despised figure to AWFLs.) Warren’s failure to connect with Democratic voters, most of whom are women, was immediately blamed on sexism and internalized misogyny [1]. The New York Times, which co-endorsed Warren and Amy Klobuchar for president, published a report on how deeply upset their readers [2] were over Warren’s departure. The Times also published a deranged Facebook post masquerading as a column titled: “I Am Burning With Fury and Grief Over Elizabeth Warren. And I’m Not Alone [3].” The op-ed is an unintentionally hilarious read that laments how democracy doesn’t reward exceptional women like Warren. The op-ed’s writer Sarah Smarsh also says Warren has lodged herself in the “female psyche.”

Warren emerged as the Lisa Simpson of the field. She was the smart overachiever who deserved to win. Bernie is the slacker and secret woman-hater who shouldn’t even be allowed in the primary. Joe Biden is a doddering old racist who should retire. The nomination belonged to Liz Warren, but the patriarchy stole it from her.

Plenty of other women have dropped out of the race; only Warren caused this much anguish. No other politician embodies the AWFL spirit and their politics. Just see this tweet:

You deserve better. Dump the guy who ghosted you, convince the roommate to let you adopt a dog, and I'll take care of canceling your student loan debt! https://t.co/YIMb9o1Y8P [4]

Warren’s presidential bid may be over, but she could be picked as Joe Biden’s running mate and she will remain a powerful senator if she doesn’t get the VP nomination. Warren shows how a white woman can thrive in a minority-dominated Democratic party: she bends the knee and devotes herself to non-white interests.

In the past, Warren claimed that she — a blonde-haired, blue-eyed woman — was non-white. On numerous official forms, she claimed her ethnic background as Amerindian and likely got her job at Harvard Law School due to this phony background. Harvard Law listed her as a minority professor [6], yet her DNA test showed her to only be 1/1024 Indian [7]. This embarrassment did not stop her campaign and none of her Democratic opponents brought up her racial appropriation. Trump’s frequent use of the Pocahontas nickname to mock Warren probably convinced journalists and Democrats to forget about it.

Like many AWFLs, Warren has never had to pay for her lies; and she plays with the truth a lot. She claimed her grandparents opposed her parents’ marriage [8] because of racism over the (non-existent) Indian heritage. She claimed she was fired from a job in the 1970s [9] due to pregnancy, which was proven to be false. She claimed Bernie Sanders [10]said a woman couldn’t be elected president, which also rang false. None of her lies ever hurt her, though they did push Bernie Bros into dubbing her a snake.

Her Indian lie should’ve sunk her campaign. But she figured out a way to compensate for it. Out of all the candidates, Warren was arguably the greatest panderer to minority interests. She was one of the first candidates to endorse reparations for blacks. “We must confront the dark history of slavery and government-sanctioned discrimination in this country that has had many consequences including undermining the ability of Black families to build wealth in America for generations,” she said last year [11]. She also wanted to offer reparations to Indians and gays as well [12].

You can buy Greg Hood’s Waking Up From the American Dream here. [13]

She referred to Hispanics as “Latinx.” She put her pronouns in her Twitter bio. She promised to bring unprecedented levels of diversity to her presidential cabinet. She even claimed that at least half of her cabinet would be “filled by women and non-binary people.” She also said she would require her education secretary [14]to be approved by a young trans person. She released a plan to specifically [15] show how she would help blacks. It included billions in grants for “entrepreneurs of color” and promises to close the alleged pay gap between “women of color” and whites.

“Immigrants have always been a vital source of American strength,” Warren said in the introduction to her plan [17]. “They grow our economy and make our communities richer and more diverse.” Diversity is always a strength and we should always want more of it. Don’t question the dogma.

The most revealing line of her agenda is who she believes is the backbone of America. Last November, Warren tweeted [19]: “Black trans and cis women, gender-nonconforming, and nonbinary people are the backbone of our democracy.”

This is jarringly different from the mainstream consensus of the past. The World War I pamphlet What Is It to Be an American? declared [20]: “Our backbone is Anglo-Saxon; the sinews of our vast body may come from a hundred hardy races, but our backbone comes from but one.” Even though some white ethnics would grumble at it, this statement was the mainstream consensus up until 50 years ago. Now white Anglo-Saxon candidates for president say America’s real backbone is nonbinary black people. It’s beyond parody, but we, unfortunately, have to take it seriously.

Warren’s statement reaffirms her commitment to erasing America’s white founding and replacing it with a new vision, a vision of America built by the coalition of the oppressed. The real founders were people of color; The New York Times says so [21]. Whites just stole the labor of blacks and the land of Indians–they can’t be the founders of this great country.

Warren’s America is multiracial, progressive, and thoroughly alien to our ancestors. AWFLs love this vision because it imagines the new Americans would welcome them as the cool wine aunts who know their place. They think they would still be able to work, live in the big city, sleep around, become a dog mom, binge watch TV, and go on exotic sex trips under this regime. Only the bad whites — like their dads — would suffer under the new order.

Sen. Warren is smarter than her fellow AWFLs and has navigated through life to obtain power. She’s lied, she’s radically changed her positions, and she always conforms to the prevailing winds. The Democrats may be the non-white party, but the non-whites apparently can’t field competent leaders. AWFLs like Warren fill the gap.

The Democrats still welcome white leaders — they just need to know who they serve.